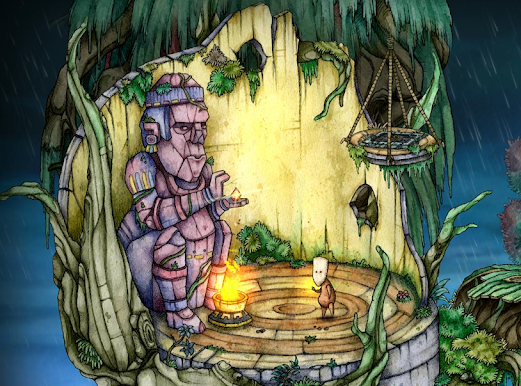 There is an undeniable charm that accompanies Candle: The Power of the Flame with its whimsical music and delightful visuals. This charm is key, because it does help to offset some of the shortcomings that present themselves in this enjoyable if sometimes frustrating game that squanders some of its early promise.

Here at DigitallyDownloaded.net, we try not to get too caught up in the details like graphics, but at the same time – I certainly want to call out and appreciate what a lovely game Candle really is. The visual style is struck me in much the same way Limbo did the first time I saw it. Of course, instead of relying simply on sharp dark and light contrasts to craft the stages, Candle is incredibly colourful. There is a blend of water painting and stained glass qualities to the art direction which do match the equally enchanting music that accompanies the adventure. However, as good as the visuals are, they can also create some problems as well.

Because everything in Candle has that uniquely hand-painted look to it, with so many uneven lines with environments dotted with detail, it can be more than a little challenging to pick out some of the more minute details nestled into the world. Why is this important? Because while Candle is primarily a platformer, there are some light puzzle elements sprinkled in here and there as well. These generally work well and are organic to the level designs, but sometimes they blend just a bit too well. Some of the puzzles I spent large chunks of time with had less to do with how creatively they were designed and more to do with having missed some small object or detail in the environment. The way the environments are drawn versus being slapped together with tiles certainly makes for a prettier game, just one that can make discerning small necessary details harder to pick out now and again. I will state however, that the puzzles themselves and the way they are intertwined with one another as part of a larger world is really cleverly done. Completing a puzzle in one area can very well lend insight and access to another in region and it creates a wonderful sense of world-building that ties the experience together incredibly effectively. 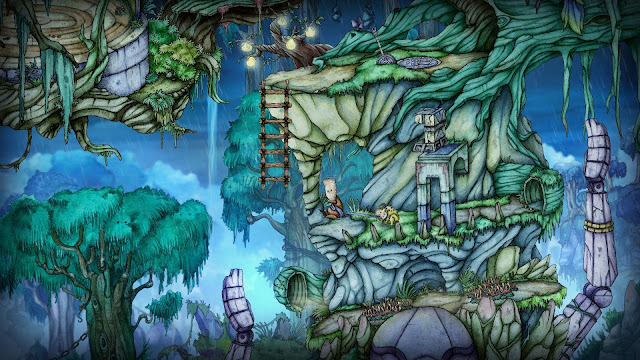 Our story follows a character named Teku, who instead of a left hand has a candle instead as part of a ritual that is both honour and yet sacrifice. Teku is then a “Light-Guide” – an important figure to his people. It is a strange premise for character design, but it is handled beautifully most of the time. The story itself is one of gods and men, but it grows a bit thin during the central portion of the game. That is something of a shame since Candle’s opening cinematic is fantastic and sets the stage for something I was hoping to find a bit more emotionally impacting than it turned out to be. Teku and his magical left hand allow him to light passages and solve puzzles as he attempts to rescue his village’s shaman from the evil Wakcha tribe. The creative premise and beautifully illustrated world are a joy to see unravel while playing the game, but some of that joy is hampered by questionable controls.

This is the frustration I mentioned in the introduction. Platforming games often live or die by precision controls, and unfortunately Candle flounders here. Everything is just a little too mushy for a game that requires some pretty precise jumps and landings. This is slightly offset by having numerous checkpoints along the way, and I appreciated them believe me, but there is something to be said about how those checkpoints feel somewhat like a crutch for poor controls. Another small quibble I have is in the hint system. It is meant to offset the concern I voiced earlier over missing small details to complete the puzzles, but the effectiveness of the small prompts varies from really helpful to pretty much useless. I like that it is easily accessible (just a push of the button), but it can be hit or miss. Thankfully interacting with the actual items in the world (once you are aware of what you are trying to interact with) is quite easy. I appreciate being able to simply press a button to make something happen, and not having to wrestle with how to manipulate an object in order to complete the puzzle.

Despite these two concerns I have, the whole of Candle is better than its parts. The exploration of the world has that wide-open Metroidvania feel at times, and while there is a lot of fetching items and running back and forth to be done, it is so beautiful that I did not mind retracing my steps. It almost always felt like there was something new to see, perhaps something I had failed to take note of the first time. I would liked to have seen a bit more from the narrative side of things, but there are some memorable characters along the way to interact with. These moments provide some additional insight to the world and the people who inhabit it, but I personally found the narrative more gripping during the introductory moments than the closing ones. 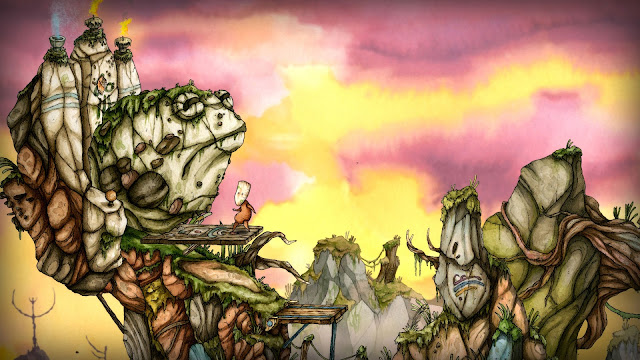 Candle: The Power of the Flame is an interesting title that almost looks like an old-school point-and-click adventure game, but its mix of platforming and exploration make for a deeper if flawed experience. It is unfortunate that the controls and some of the more vague environmental puzzles are not more refined, because they hold back what otherwise is still a memorable game. Even with those blemishes, the way the world is woven together and the interesting premise are more than enough reason to spend some time exploring.