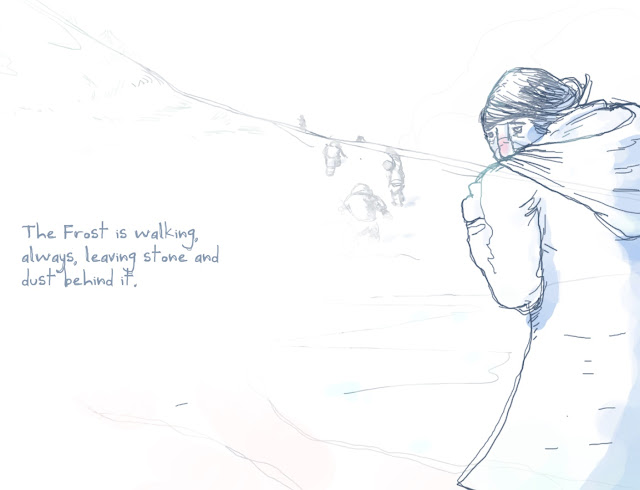 Artists do love to romanticise a struggle for survival in extreme environments. Exploring the fragility of life, while reminding audiences that at times even basic staples like food can be a luxury, is an easy way of tapping into a sense of empathy and to encourage the audience to root for the underdog. Frost, a new (to Nintendo Switch) deck-building single player digital card game, attempts to make the highly abstract systems of the card game itself more engaging by tapping into that sense of struggle for survival. For the most part, it does succeed at that.

If you’re like me, you’re immediately going to compare Frost to Shephy, one of the earlier (and especially memorable) Nintendo Switch releases. Shephy, too, was a single player deck building card game, and, just like Frost, it loved giving players a challenge. Shephy was weird, though. Shephy was a highly abstract existentialist crisis under the most unexpected veneer of poorly-drawn cartoon sheep humping. Frost is (much) more moderate in tone, which means it will be palatable to more players, at the expense of being less memorable.

In Frost, you need to guide a ragged band of survivors across a brutally difficult tundra, scavenging for food and fuel supplies as you go, but doing so quickly, because a killer frost storm is chasing you. Move across twenty legs of the tundra and you “win” – by which I am guessing means you’ve found somewhere more mild to live (the game’s rather silent on what happens to the survivors after they “win”). Get caught by the storm, or run out of “health points” from wolf attacks and the like, and it’s game over. 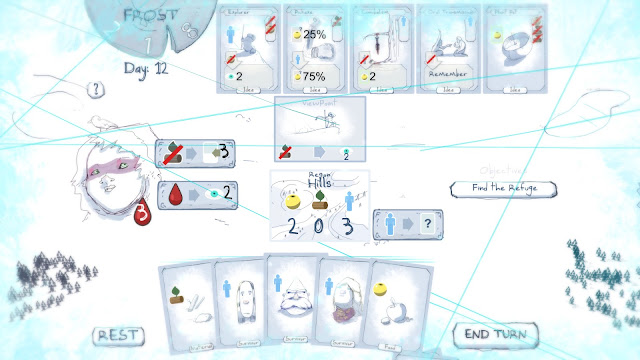 At the very start of the game, you’ve got a deck made up of four different kinds of cards – food, fuel, survivors, and exhaustion. To progress from one leg of the journey to the next, you need to fulfill certain conditions, such as supply three food and one survivor, or two fuel and two food. Before you do that, though, you can send your survivors foraging for additional food, fuel or survivors, or alternatively purchase special cards that offer additional effects, like the ability to remove exhaustion cards from the deck, or a spear to fight off an attacking wolf which will show up from time to time.

So the core of Frost is about knowing when to stop wasting time collecting resources and cards from one area, and to move on before the frost storm catches you up. It’s a simple, elegant card game mechanically, and a very precise and clear tutorial will have you up and playing within minutes. As you play more, you’ll unlock a wider range of cards, which both add to the strategy and challenge level of the game.

There’s a couple of noteworthy things about Frost, which speak both to its mechanical strengths but thematic weaknesses; first of all, the game does a really good job of minimising the impact that luck has. With so many deck building card games (Shephy included), the order in which you draw cards can impact directly on your ability to fulfill the game’s victory conditions. In Frost, there’s typically a couple of different ways you can approach the random stuff that the game throws at you, and so, success is more related to strategy than luck. 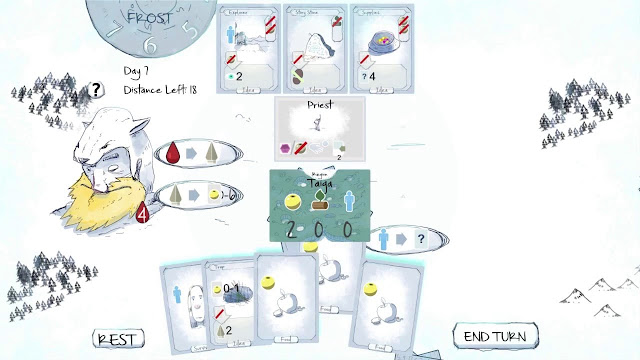 On the other hand, the random elements seem hopelessly unbalanced to make things more difficult than they need to be. For example; there are cards that have a certain affect a certain percentage of the time (a 50 per cent chance that using a card will give you one extra supply of food, for example), but in activating those cards you’ll fail to get that food supply far more often than 50 per cent of the time. I stopped indulging in the luck-based cards very quickly for this reason.

The reason that the developers have done that, I suspect, is that the game gets far too easy in the late game if you’re effective in collecting resources. Frost starts out really hard, with very limited resources or ways to deal with the threats in the world. Assuming you don’t fail early, it gets progressively easier because you’ll stockpile more good stuff (resources and useful items) than the game can throw harmful cards at you. To me, this is the greatest failing of Frost; I wanted a steady escalation to the point that those last few legs would put you in a positively nihilistic mood, but this didn’t happen. With no scoring, online leaderboards, or multiplayer (all of which would have ruined the game’s atmosphere, so that’s a good thing in itself), Frost needed to tell a compelling story of survival through its cards. Unfortunately it becomes a veritable skip through a meadow.

Some events popping up through the game wouldn’t have gone amiss either. Little bits of text pop up to tell you that your group has moved to a tundra, or a frozen river, or whatever else, but the environment doesn’t change, and neither are there cards specific to those environments. Negative cards (such as wolves) remain a persistent threat through the game, but you will run into those regardless of what location you’ve travelled to, further preventing the game from having any sense of location or progress. Contrast Frost to Hand of Fate 2 – also recently released on Nintendo Switch – and you can see that it’s possible to do storytelling through a deck building card game structure. Even Shephy pushed out a story which was, weird as it was, actually brilliant. Frost gives you a snippet at the start to set the scene, but then fails to executive any cohesiveness through the card game, and leaves you with a nothing ending. In between all you get is one card draw after another, with nothing to differentiate them or set a scene. It’s a massive wasted opportunity. 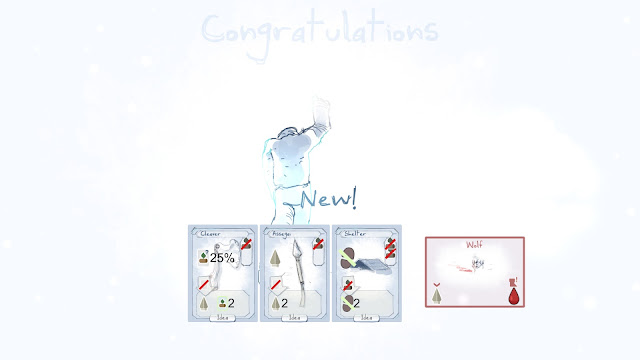 This is especially true given that the game looks the part. Frost uses the most beautiful minimalist art design to subtly reinforce the cold vastness of the game world. Equally it uses ambient sound and music brilliantly to set a chilly tone. It’s the middle of winter here in Australia, and Frost is the kind of game that’s enjoyable to play curled up and cozy under a blanket – glad that you don’t have to be out there in the cold yourself.

Frost is mechanically sound and has all the hallmarks of a truly great single player card game. Sadly, its inability to take the concept and really drive home something impactful leaves it feeling a little shallow and limited in the end; a missed opportunity for something so gorgeous and refined.

Review: Candle: The Power of the Flame (Nintendo Switch)