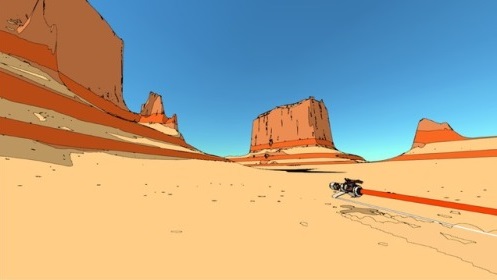 We’ve seen our fair share of wastelands this E3, from urban, to nuclear, to zombified, but none could be described as beautiful until now. There are few games on show this year which are truly eye-catching, and then along comes Sable which expresses the simple joy of gliding over hills and across a vast landscape. It’s a game reminiscent of Inner Space and Journey, with a mysterious story, colourful art style and a feel of peacefulness throughout.

Sable comes developed by Shedworks, a North-London studio which might really just be two friends working in a shed. Not a lot is known aside from screenshots and a few seconds of footage in Microsoft’s ID@Xbox sizzle reel. Sandwiched into the middle of a 2-minute video shared between 21 other games, Sable still stands out as one of the most interesting of the bunch, with its low poly artstyle and gracefully smooth movement teasing an enormous world to explore. Early screenshots show vast dunes to traverse, a dynamic day/night system and large interior spaces to explore on-foot.

The game is still in early production, set for a 2019 release. Details about overarching story and gameplay mechanics are still in the planning stage, but that hasn’t stopped one of our favourite publishers, Raw Fury, from backing the game. The one common theme across all press so far though, is that this will be a game without combat. With influences ranging from Ghibli and Star Wars, but also more obscure designers such as Moebius and Archigram, Sable is shaping itself to be a game worth looking out for.

VIDEO: Dead Or Alive 6 drops sex for violence… Is this the right move?