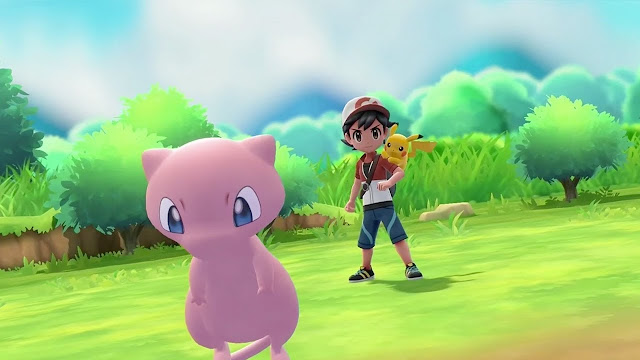 News by Clark A.
The world probably wasn’t clamouring for another trip to the Kanto region from the original Pokémon games. Said region was accessible on the Game Boy, the Game Boy Colour, the Game Boy Advance, and the Nintendo DS. The 3DS even has access to three versions of Kanto. That aside, the reality is that Pokémon Let’s Go exists and is ushering in a new generation of players so we might as well enjoy it.
In all fairness, Let’s Go is shaping up to offer the most unique rendition of Red and Blue’s iconic landscape by far. We’ve already seen the newfangled Switch graphics and the Pokémon Go-esque method of catching wild Pokémon and those seemed different enough. The lush, vivid environments add plenty for newcomers. Thanks to the trailer shown at E3 and the more thorough Treehouse demonstrations, though, it’s now clearer that Let’s Go wants to add a cozier atmosphere to the old games and get players invested in the interactions between humans and Pokémon.
New events have been added, such as one that involves taking care of a Slowpoke in Pewter City. This helps drive home that bond between Pokémon and humans outside of the battling (not dissimilarly to the recent Sun and Moon games). Aesthetic changes like an audience now watching from the bleachers in the Pokémon gym and Pokémon visually roaming the grass help make the world feel living and breathing. Like in the beloved Pokémon Heart Gold and Soul Silver games, you can once again stroll around with your favourite ‘mon behind you. Being able to ride your own pal instead of a generic icon in a cutscene or one predetermined monster is a refreshing expansion of that idea.
Every Pokémon has always been technically “unique”, but it’s no longer just a bullet point on a status screen. The individual heights and weights have a more pronounced effect here. While some have bemoaned the lack of a normal fighting system to catch new Pokémon, it does make the game feel more like a journey in line with the anime. It’s more about discovery than utility.
Drop-in co-op gameplay is just the cherry on top, taking advantage of the Switch’s half-status as a home console to invite nearby friends and family into the Pokémon world. Combined with the aforementioned graphical increases and refined mechanics, it does seem like Let’s Go will let players feel closer to the Pokémon world. If the rest of the region is full of tweaks and expanded ideas, Let’s Go should keep open-minded fans entertained until those eighth generation games arrive.
– Clark A.
Anime Editor
Share this