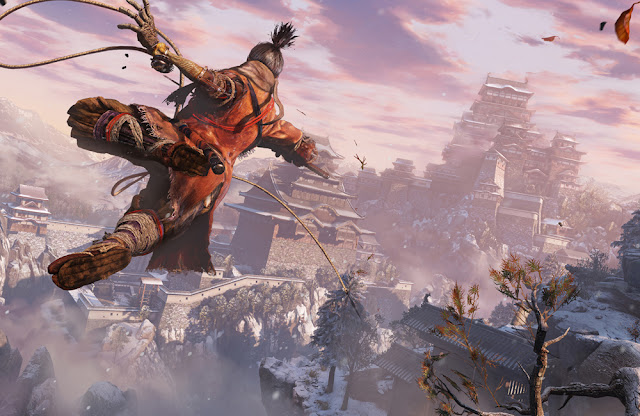 The creators of Dark Souls and Bloodborne are back with their next game, and rather than another gothic European setting (or the sci-fi game some were hoping for), FromSoftware are turning their attention to the Sengoku period of Japanese history. Sekiro: Shadows Die Twice follows a ninja with a prosthetic arm as he hordes of demons and samurai on a quest to rescue his kidnapped lord.

Sekiro: Shadows Die Twice appears to bear all the hallmarks of a FromSoftware game, with a dark, demon-infested world, brutal boss fights, weighty combat, and a a stunning environment full of hidden stories. However, it looks to be faster-paced than its spiritual predecessors, with much more focus on agility and stealth—in the trailer, the hero can be seen sneaking around and grappling onto rooftops. It looks almost like a Dark Souls / Tenchu hybrid—something I’m very much here for.


Curiously, an inability to die seems to be a big thematic point for the game. The trailer opens with the hero awakening from a nightmare as a voice over says “Looks like death is not your fate just yet.” Later on, we see him fighting a giant oni boss, and getting cut down—only to to resurrect and kill said oni as it walks away. Given FromSoftware’s reputation, I can’t imagine they’d be making an “easy” game, and Sekiro looks brutal and uncompromising in its tone, but it does look like it might play around with the famed “You Died” motif.

The elephant in the room, of course, is the fact that we already have an excellent Sengoku Souls-like in Koei Tecmo’s Nioh. Despite a similar setting and style, Sekiro looks like it has enough of its own ideas to stand alongside Nioh. If nothing else, we might see FromSoftware take the mantle back from Koei Tecmo.

Though it was revealed during Microsoft’s conference, Sekiro is a multiplatform game. It’s coming to PlayStation 4, Xbox One, and PC in early 2019.