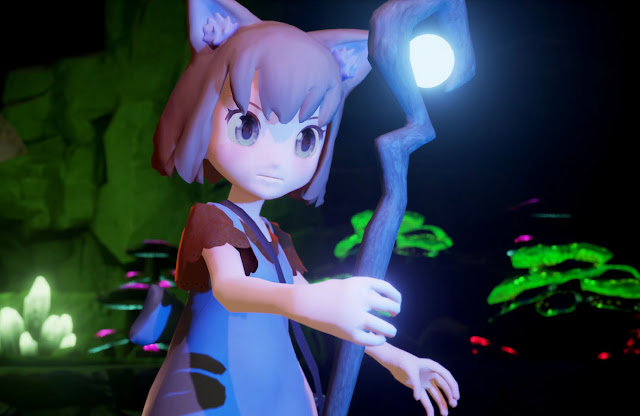 I know, I know: this sounds familiar. There is no shortage of games featuring cat-human hybrids or mysterious islands, although they rarely fall together in such perfect harmony. At least, I think they will. Giraffe and Annika is an indie title being developed by Atelier Mimina, and the developer announced at BitSummit that the title would be coming to PC this year and Switch in 2019.

Annika is the lucky cat-eared girl, who also sports a lovely floofy cat tail. The game is all about her exploration of the island of Spika, where each dungeon’s boss will need to be defeated by a music-based battle system. Could Miku be a guest star?! (Okay, likely not, but a girl can dream.)

Related Reading: When I think of a mysterious island, I can’t help but think of The Witness — Mikhail’s review here.

Along with news of the Switch release — the PC release was already roughly scheduled — comes a new video that showcases the game’s adventure mode, comedic value, dungeons, and rhythm-game boss-battle mode. These inclusions make Giraffe and Annika even more appealing. Take a look:

If you’re looking to see what the title will look like in English, take a look at this introductory comic video from last year.