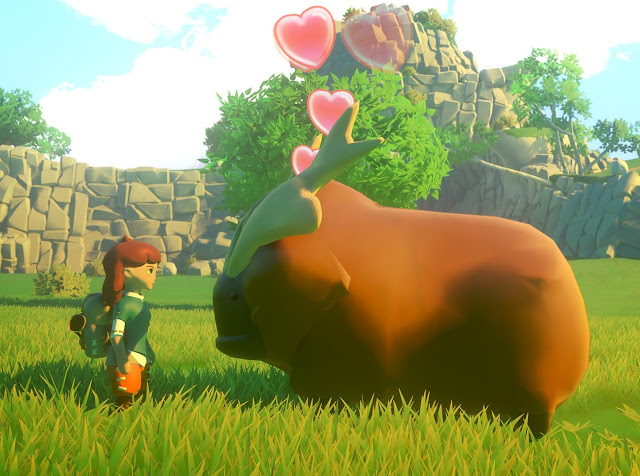 One interesting idea which has become refreshingly common with indie studios formed from ex-Triple-A talent is design by subtraction: the systematic removal of elements which big-budget blockbusters could never dream of tampering with for fear of alienating their consumer base. Such is the case with Yonder by Prideful Sloth, an Australian studio formed of Rockstar alums which dared to make an open world game without fast travel or a world map.

Their game is also completely free of violence, but personally I find the lack of fast travel more shocking. This is a game which insists the player stop and take the time to walk across a picturesque field, and to learn to love each hill for what marvels may lie behind its crest. It’s entirely happy to take away the design elements which facilitate player agency at the cost of watering down on narrative impact – elements which now pervade mainstream gaming. Yonder rattled a few cages upon its original release (with multiple critics inferring that a game in which you fight and kill nothing is thus a game in which you do nothing) and is sure to keep doing so on the Switch, but hopefully Nintendo’s more play-focused console might give this quirky game a few more devoted fans.

Yonder isn’t a game which breaks down nicely into core mechanics, as it’s so much more focused on being a cohesive experience. The game plays out like any other open-world RPG: the player is dropped onto the island of Gemea, they are given quests from townspeople, and eventually by exploring enough and completing enough quests, they unlock passage to the next part of the island, and so on. While most RPGs have combat encounters and progression through levelling up, Yonder’s quests are all about collecting and crafting, most often finding an object on one side of the zone and delivering it to someone on the opposite side. While this might sound banal, the quests are actually designed to make the players fully explore the space available to them, and it’s the traversal which is the really special part. Some of my favourite times in this game were spent effectively doing nothing. It’s an almost Animal Crossing-like zen which commands you to fish for hours, redecorate your farm until it’s perfect or find every last flower the world has to offer – and its something which is not as easily described as it is felt firsthand. 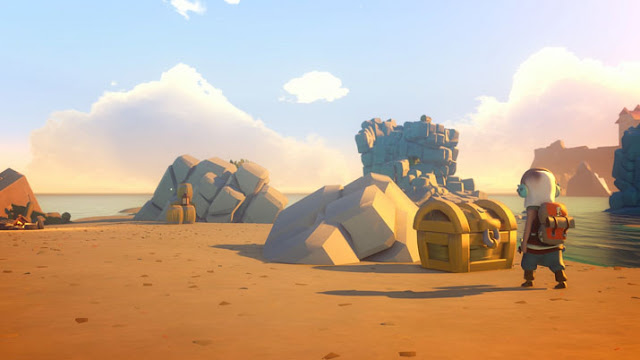 For people familiar with Bartle’s Taxonomy, which categorises the ways most players react to videogames and interactive media, Yonder becomes a far more interesting title. In analysing the way different people found enjoyment from role-playing games, Richard Bartle divided players into four driving tendencies: achievers, explorers, socialisers, and killers. Modern gaming has largely tended towards placating the achievers, providing lots of incentives and rewards for playing the way the designers intended. Second comes the killers, who derive satisfaction from exerting dominance using a game’s mechanics (not always, but fairly often, though killing things). Explorers are an oft misunderstood bunch by game designers – they tend to prefer unintended interactions, niche mechanics and small details over the more choreographed fare – but Yonder seems almost tailor made for them.

With an absence of achievements and conflict, Prideful Sloth create an open world which is to be explored for exploration’s sake. It’s rare that any two locations in the vast world of Gemea look alike: towns have unique forms of architecture, plains form ridges and valleys, animals distribute themselves as a kind of living landmark, and eye-catching landmarks ensure you’ll know your lay of the land without needing to consult a map. The art and sound assets are gorgeous and effectively sell a sense of otherworldliness. The player is given a magic compass which points them in a straight line towards their next objective, and a small minimap that helps them orientate themselves. Aside from that, they’re alone in an enormous island.

The removal of conflict also sets a different tone compared to virtually any other open world game: the player is never made to feel unsafe while exploring, but exploration is also not used as a means to an end. Usually open world games use strong enemies to keep players focused on the intended path while allowing more seasoned players to sequence break – but this has the effect of alienating players whose curiosity gets the better of them. Yonder never punishes you for wandering off the beaten path, but it never directly encourages it either. The reward a player gets for exploring is not a powerup to help them with the main game, or a shiny badge they can show off, but rather just the experience of seeing something that other players might not have seen: a different perspective of the world, or sometimes a unique art asset. The game’s photo mode is perfect for this too – being able to leave a record of yourself at the top of a tall mountain, or standing in the maw of a deep valley, makes these otherwise mundane situations special for the player who goes out of the way to encounter them. 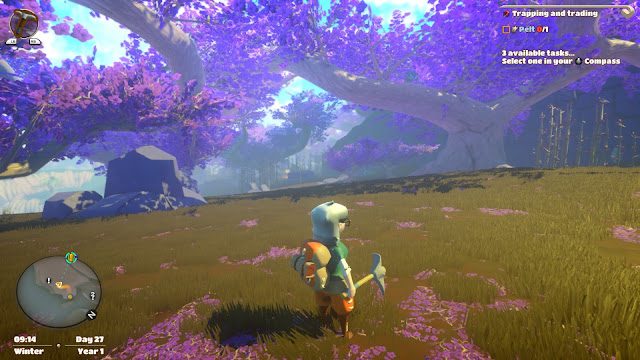 I also loved how the game’s world remains persistent depending on which actions the player takes. Cutting down trees is permanent, and leaves behind a patch of soil for you to plant a new one. Animals can be befriended by giving them treats and can be brought along to a farm which you build and upgrade. The game’s various resources progressively become more complex, and the player will soon become acquainted with a robust crafting system which is less about making a solution to a problem, and more about exploring what can be made with the things available to you. This is a world which actively invites the audience to enjoy and become a part of it, and it’s so much more immersive compared to a world which encourages the audience to destroy and take dominion over it.

If there is any complaint to be made, its that the game’s writing and explicit story events tend to not reach the heights of its other components. I often felt that sidequests could have fleshed out the game’s characters and cities more, but often I wound up skipping dialogue as it was more instructional than evocative. The game works best when the player is alone, exploring the natural world rather than the physical. Once the player talks to the NPC, the illusion is broken a little.

If you’re like me, your enjoyment of Yonder will be heightened upon knowing that it’ll likely infuriate anyone accustomed to the Triple-A formula of open world design. Others might say this is a world with nothing in it, but you’ll know better – it’s a world of emotions, tranquility, wonder and relaxation. It’s something comfortable to come home to, which doesn’t assail your senses with constant stimuli, but instead lets you explore a vast landscape at your own pace. This is a game which taught me to love the feeling of being lost, and I’m sure it’s one I will return to for a long time.