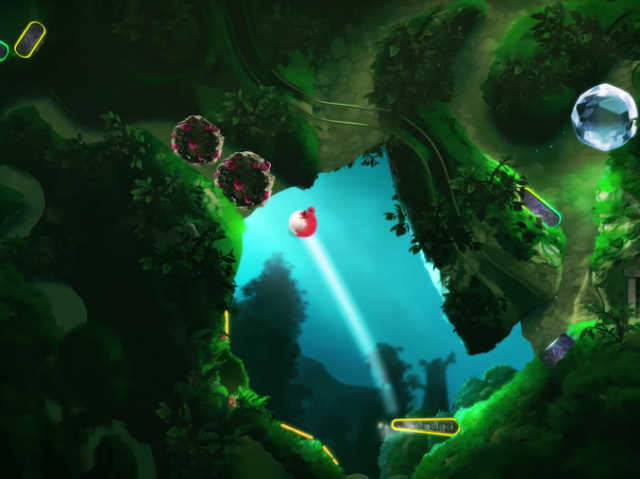 Yoku’s Island Express is a game which I could describe as “peak Metroidvania”, or maybe even “aggressively Metroidvania”. I feel a bit guilty making that joke since two-man team Villa Gorilla are developers with a lot of heart, and after a 5-year development cycle for Yoku I’m sure they could have never anticipated launching on a console that already has Axiom Verge, Dandara, Mummy Demastered, Hollow Knight… just about everything except an actual Metroid or Castlevania.

The team behind Villa Gorilla is no stranger to Nintendo’s systems, with one half of the studio being responsible for the Colors 3D app for 3DS, and Yoku’s Island Express embodies Nintendo’s play-first ethos to a T. Mechanically though, the game feels like the surface mechanics of pinball duct-taped to the surface mechanics of a Metroidvania, and while there are interesting ideas that arise due to the unique conceit, I can’t help but shake the feeling of a treaded weariness that might make the game hard to stand out in the average Switch owner’s enormous library.

It wouldn’t be fair if I didn’t sing the game’s praises, though. The art style is gorgeous, featuring bright colours and a delightful assortment of characters, some of whom made me genuinely smile upon seeing them. Yoku himself is an adorable dung-beetle postman arriving on a lush island, tasked with delivering a mountain of overdue mail and meeting the island’s friendly denizens along the way. It’s a catalyst for all sorts of sweet dreams; there’s not even any proper combat in the game, with antagonistic forces mostly acting out of amorality rather than insidiousness, and “boss battles” appearing as exceptionally complex pinball setpieces. 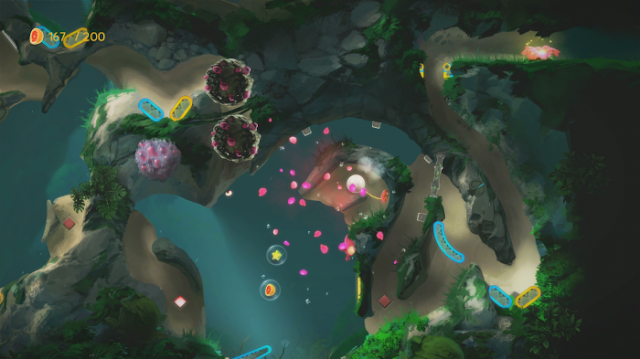 The control scheme is a novel joy once you first boot up the game – you can move Yoku left and right but he can’t jump; instead, you’ll control blue and orange bumpers in the environment with the left and right shoulder buttons to bounce Yoku’s ball around to reach higher and lower areas. The game feel is fantastic, with kinetic movements and lots of complex, twisted paths that make the world feel alive. You’ll also need to use pinball bumpers to send Yoku around the stage in order to solve small puzzles or pick up far-flung keys to open locked doors: these mechanics feel just as they would on a real pinball table, and those accustomed to pinball will find their skills tested well here. The Metroidvania side of things informs the design of the game’s world – it’s a vast island full of branching paths that the player can explore on their own whim, and there’s a healthy dose of backtracking and recontextualization of old areas to keeps the game world feeling alive.

Yoku’s Island Express works best when it understands that it’s a hybrid-genre game, and it explores the unique interactions that its systems allow. I particularly loved how the boss stages took some of the more interesting ideas that a platformer with pinball controls could facilitate and created challenges out of them for the player to accomplish. These moments were when the game shined the strongest, combining the joy of solving a difficult puzzle with the tension of making a narrow jump in a platformer. As the player continues to pick up and unlock abilities throughout the game, the challenges become sequentially more intricate, with the later areas requiring some keen dexterity in order to successfully navigate.

Unfortunately, the game is let down in the moments where pinball and platformer don’t mesh as smoothly. Getting from one area to the next can occasionally be a chore, as sometimes you’ll need to re-do a pinball challenge that you’ve already completed, but the exit path is narrow enough that you’ll need a few tries to successfully get past. There are bumpers which need to be unlocked by spending fruit which can be found scattered around the level: while this seems to be a gating mechanism, there are lots of instances where unlocked bumpers don’t do anything significant, or require the player to also have a late-game ability before they’re useful. Fruit is otherwise a fairly useless resource, and while the designers are able to lay trails of fruit to signpost where the player should go, I often forgot I even had any unless I was shy of the amount needed to unlock the path deeper into the game. 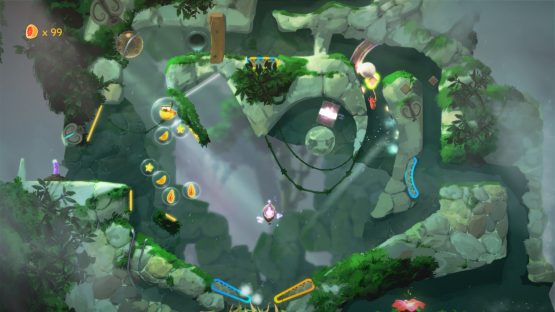 Villa Gorilla do try to make the game’s world elaborate and interconnected for ease of backtracking, but I’m not sure if doing so is in the best interests of the game. The player does get access to a world map with their destinations marked with little icons, but the island is an enormous place without an easy through-line to get from one location to the next. I often had trouble getting to where I wanted to go, as I’d follow the path laid out by the bumpers only to be rocketed towards a completely different area of the map. Perhaps it would have been more effective to have areas close off once you’ve received all the useful items, or to make some areas more visually distinct from each other. In the long run, some of the earlier pinball challenges felt arbitrary and I got annoyed if I had to keep doing them again to get from one end of the map to the other.

For the most part though, Yoku’s Island Express is a lot of wholesome, whimsical fun. It manages to make the hybrid of two disparate genres work in some inspired ways, and the result is a unique game full of surprises that is sure to delight players. The only flaw is when the mechanics outweigh their welcome and stop feeling unique – the moments where Yoku is just a pinball game, or just a Metroidvania, are generally the weakest. That doesn’t stop this one from being a game full of bright ideas, which is well worth your time if you’re interested in seeing how an accomplished indie studio can take two well-explored gameplay styles and turn them into something fresh and new.