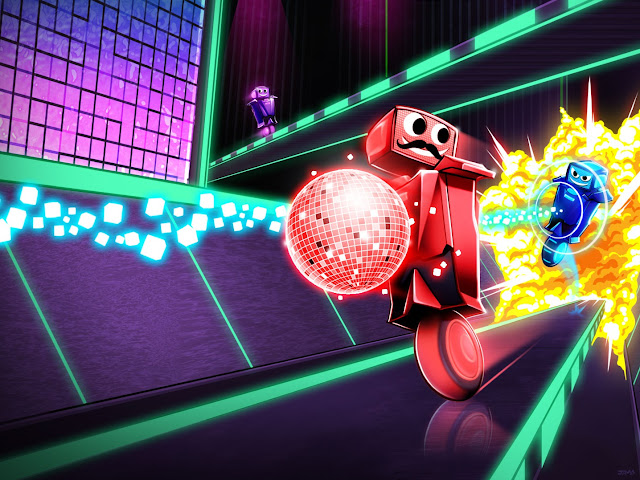 Disco Dodgeball is one groovy little game. You play as a robot that can pick up groovy mirror ball-like objects and hurl them at opponents. A single hit and the opponent is toasted, but it’s also possible to time a catch an opponent’s throw mid-air, which eliminates them instead. That’s about the extent of the game, and while that might sound simple, the sheer manic fun of it all makes Disco Dodgeball one of the most enjoyable multiplayer games that I’ve played in quite some time.

While you can learn to play this game in just a few minutes, actually mastering it has the same curve to it that any good multiplayer game does – you’ll start out fumbling and awkward, and find the timing window required to catch an inbound mirror ball to be too brutally short for its own good. But then, after a few more hours you’ll start catching these mirror balls and getting a feel for the flow and tactics of the game, and suddenly you won’t feel like the sucker on the play field.

A few more hours hard work and you’ll be leaping around, dashing, grabbing mirror balls and then sniping enemies from afar with complete precision and masterfully angled ricochets. Because Disco Dodgeball’s levels are small and enclosed, but allow for bouncing attacks of walls and the like, the pace becomes manic and doesn’t let up at any point, and at that point you’ll be glad that the mechanics of the game are kept as simple as possible. 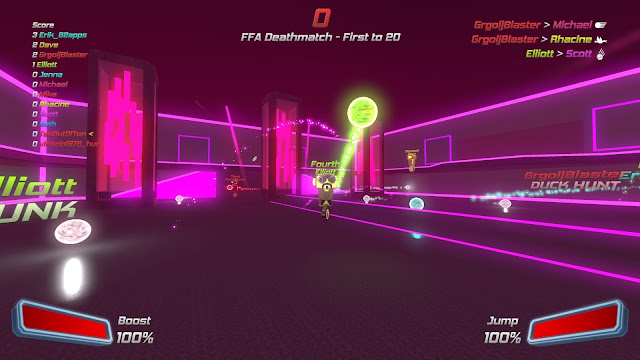 What is absolutely incredible about Disco Dodgeball is just how many different ways there are to play. From a standard deathmatch to a horde mode, football modes, king of the hill, tag, and so on and so forth, if you allow the game to randomly select the mode to play, you’ll never want for variety. Of course, as this is an indie multiplayer-focused title it’s hard to imagine how the game will sustain a community across all those modes in the long term, but for now it’s great fun exploring the nuances of each.

Disco Dodgeball does feel rather limited on the progression systems, however. You’ll earn the obligatory experience points and “level up” as you play, but there’s no sense that you’re unlocking meaningful stuff as you go along, and as superficial as that sounds, it’s concerning for the long-term health of the community around the game. Anyone who has worked in multiplayer-focused games would tell you that the progression system is absolutely essential if you want to keep people playing.

The aesthetics of the game are spot on though. As someone who loves the 70’s, 80’s, Saturday Night Fever and Boney M, I do love me a good neon glow and coloured lights. Coupled with a pulsating soundtrack, Disco Dodgeball does a far better job of calling to mind the disco aesthetic than I thought it would on first impression. How well that will go over with younger generations of players I’m not sure, but then Rocket League has developed a mammoth following on its distinctly 80’s toy principles as well. 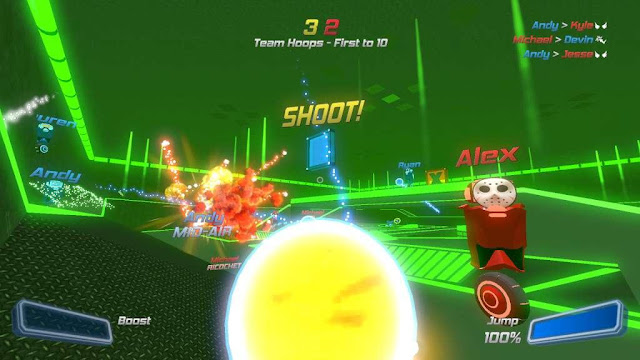 Impressively, the game offers some solid bot AI to practice against when you’re not going to be able to get a match going. Given the portability of the Nintendo Switch, and the fact you’ll often be outside of WiFi zones if you take it out and about, that’s a great feature to have on the console. I’m not a fan of multiplayer and online-only experiences on the Switch for that reason. The AI isn’t perfect and lacks the unpredictability that makes Disco Dodgeball matches dynamic and exciting, but they’re also not going to be a shooting gallery and you’ll need to play well to master them.

Playing online there is a maximum of eight players, and while the game would have become unmanageably intense with more (at least, without larger maps to accommodate the additional players), it’s hard not to wish for even larger scale matches. On the plus side, I can’t recall a single instance where frame rate drops, bad ping rates, or similar, cost me points or a match. What is a bit disappointing is the game lacks much by way of teamwork; you might buddy up with some rudimentary tactics to target an opponent together when it’s convenient to do so (i.e. you bump into an ally), on those maps where teamwork is imperative – such as the need to work together to score “goals” by tossing a ball into a specific area – teamwork limitations means that you won’t be able to get quite as much from those modes as the ones where everyone on the team can behave as individuals.

Despite those small issues, I can see this game developing a strong core audience that will play it for quite some time to come. It’s simply too groovy, colourful, and cheerful to resist.