This is going to be one of the shortest reviews I ever write, because there is so little to this game. But then again it’s going to set you back $Aus1.50 (or equivalent in other parts of the world), and as the saying goes, you get what you pay for. In this instance you get about an hour of passable fun with a really cute anime girl on the cover.

SkyPeace is a runner title, where you have no control over the forward movement of your character, but can shift them around the screen in order to have them pick up loot and dodge enemies. The game itself is set in sky, and you’re riding a flying surfboard, so you can move in all directions – think a game like R-Type, only without the shooting. Get to the end of the level and you’ll unlock the next one. Get through ten levels and congratulations! You’ve finished. Now you can go back and try and get better scores.

A couple of things hold this game back. Firstly, your character will “snap” back to the middle of the screen if you let go of the control stick. It’s handy in one sense as it lets you “re-center” your character easily, but the number of enemies that I’ve accidentally bumped into, and coins I’ve missed collecting, because I’ve accidentally eased back on the control stick, is somewhere north of the limits of my patience. I would have much rathered a control scheme which didn’t have that annoying snap-back feature “helping” me. 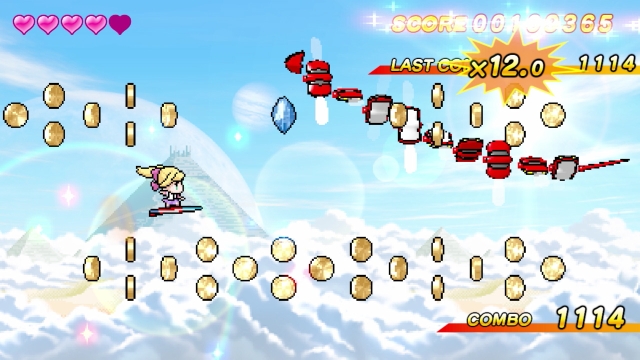 Another issue is the longevity. Yes. The game’s $1.50, I know, but even despite my aforementioned issues, it was more than possible to get scores that I was completely content with in all ten hours with a couple of hours play – two or three at most. And then there was nothing left to do. Had the developers instead made the game an endless mode with randomised enemy and coin layouts, and then had an online leaderboard (this game has no such leaderboards), it would have been a far more worthwhile game, that offered a far greater challenge and sense of reward.

And, finally, I have an issue with the presentation of the game itself. The title card has really gorgeous art. As I mentioned above, there’s a lovely anime girl.. and a dude too, I guess. I was mostly focused on the girl. But then, in game, that art is replaced with some nice background work, but very cheap looking sprites representing your characters. What’s more, the game moves as such a pace that you don’t really get a chance to distinguish what the enemy characters look like, so the game generally lacks personality.

I’m being hard on a game that was never meant to be anything but a cheap little time waster. But – and it’s a big but – for about the same price you can get something genuinely intelligent and rich like No Think, or you can grab umpteen free-to-play games on mobile that have a vested interest in being far deeper experiences. SkyPeace was made with the very best intentions, of that I’m certain. But even though the game punches above its weight in terms of presentation for its monetary price, it’s still asking for the player’s time, and even though it’s modest with what it asks of you there, too, it’s just not giving enough in return.