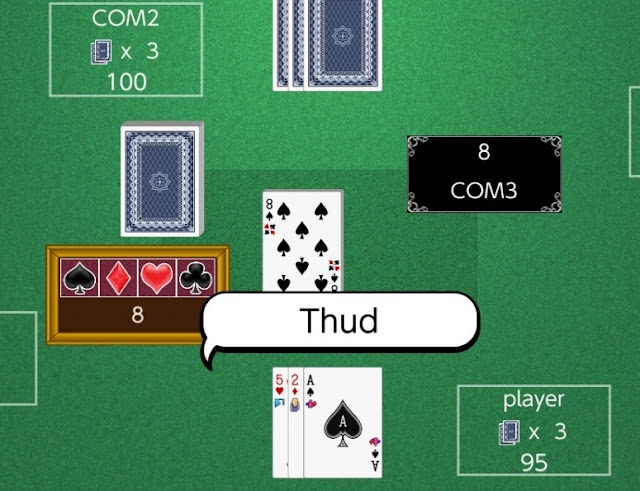 This might turn out to be the shortest review I ever write about a game. So I’ll get this disclaimer up front in case you mistake a lack of words from me for a sign that Poisoft Thud Card is not a good game (I know I tend to be wordy): I genuinely enjoy this game. It’s just that there’s not much to talk about.

Related reading: This game is very closely related to Uno. Here’s our review of Uno on the Nintendo Switch.

Poisoft Thud Card is basically a riff on Uno. Four players sit around a virtual table and take turns to throw one card onto the table. Cards must be of the same suit as the previous card on the table, or the same number. So for example, if there’s a seven of Hearts on the table, you could throw down a King of Hearts, or a seven of Spades, but not a two of Diamonds. There are some other cards which can force another player to pick up additional cards, skip their turn, or reverse the order in which turns are taken. All of this is just like in Uno.

The only real difference is that the endgame plays out slightly differently. If, after a card is discarded onto the table, the sum of cards in your hand equal the value of the card on the table, you can call “Thud,” at which point, you score points based on that total that you’ve got in your hand, and take them from the opponent that discarded the wrong card to the table. 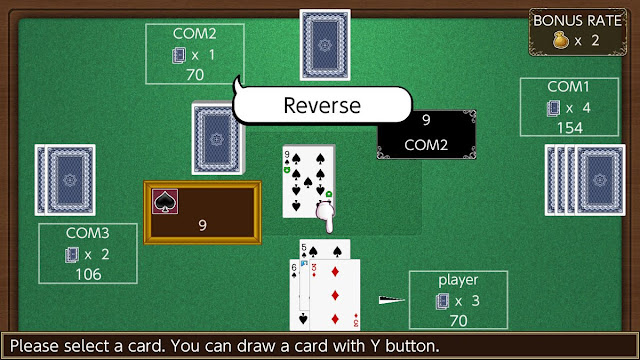 That’s it. That’s the entire game. Sadly, it takes longer than it should to really understand how to play, because the instructions are translated from Japanese into English horribly. But, once you get going it’s a nice, easy, relaxing kind of card game to play. Luck plays too much of a role for it to be a game you can take seriously (what I wouldn’t give to have a decent take on Bridge on my Nintendo Switch), but I found it an easy game to pull out and play in the background while I’m watching TV.

I can’t say I like the presentation of the game; it looks cheap and functional. It’s easy to see which cards you’re holding in your hands, but the “free Windows game” presentation is not up to snuff. Not when some other card games go to great lengths to really recreate the tactile feel of holding cards. Here it’s just pictures on little squares. Little thought has gone into making the menus visually pleasing, and while there’s online leaderboards and the like, the presentation is so dry it’s difficult to care about actually moving up the ranks.

One thing the game has going in its favour is that, because the strategies involved in winning Thud Card are so simple, the AI manages to be effective enough to be enjoyable to play. This is good because the online community for the game was dead on arrival. Just don’t expect to ever play this against other humans online. It won’t happen. Taken as a simple and cheap “solitaire” (i.e single player) game, Poisoft Thud Card is enjoyable, easy playing. I do say that as someone who spent many, many hours playing Hearts on my old Windows PCs over the years, though. I like time wasting card games. As such I’ll probably keep coming back to Thud Card as long as I have my Switch. Or, at least, until a developer releases a Hearts game on the console.

Bad games can be so very, very good