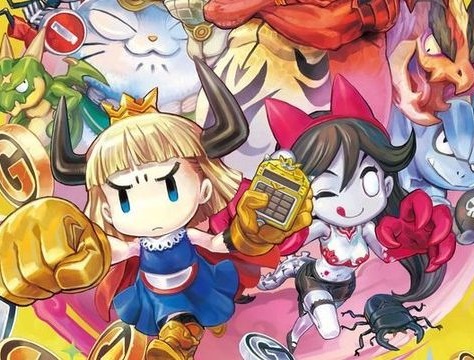 Penny-Punching Princess represents game development when it’s at its most irritating – it’s a good idea that constantly compromises itself in the pursuit of meaningless “fun”. What we have here is a foundation that could have easily been used to great effect. It’s a game that tells a story of a princess that loses everything as a result of capitalism, and then sets about getting everything back… using capitalism. What’s more, she’s grown suspicious-looking horns. It’s obvious where it’s all going to go from there…

And yet, despite having that mix of satire and criticism as a foundation, time and time again Penny-Punching Princess instead decides that it wants to be exclusively a game for entertainment. It’s like the development team figured to themselves that once the action was fun enough, their job was done and the house was built. But it isn’t done at all. The end product is like the house is missing the roof. Penny-Punching Princess is an uncritical satire of capitalism, and it is so hollow in execution. Worse, in constantly contradicts itself with its own logic, leading to an inconsistent experience that doesn’t help the initial perceptions that it’s quite shallow.

So what do you do in Penny-Punching Princess? You select a level from a menu, and then fight in some top-down brawler action, mixing basic attacks and a few special abilities together to take down hordes of enemies in an area before moving on. It’s immediately familiar to almost anyone who has played games in the past, and Penny-Punching Princess benefits from being so bright and vibrant that it’s instantly recognisable, nostalgic, and therefore appealing. 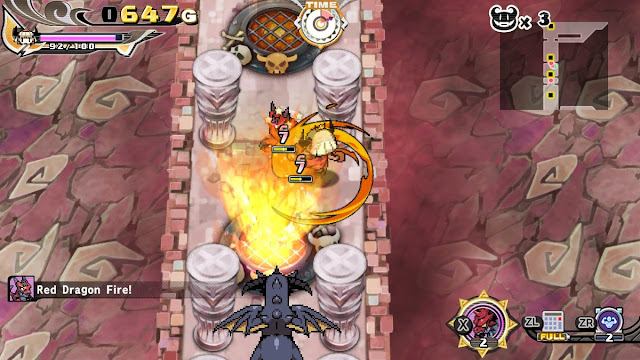 It’s not all standard brawler, though. The big bit of innovation that the game brings to the experience is the capitalism theme. At will our hero princess is able to pull up a calculator, tap in a figure of money, and then use that money on a monster or environmental trap to take possession of it. From there she can then use that trap or creature’s attacks to help her fight the other enemies surrounding her.

It really is as simple as that. Almost everything that you see on the screen can be paid for, including the most powerful enemies, so long as you have the cash to afford it. Rather than spend what feels like an age trying to slowly whittle down a big dragon’s health, just throw a lot of cash at him, then use the monster’s own attacks to clear the rest of the room. Of course, while it’s simple, it’s not necessarily easy. The size of the mobs in Penny-Punching Princess are punishing in number, and you can’t buy them all. I find it a little odd that a game that’s all about capitalism doesn’t allow you to spend into excess to acquire a monopoly on the monsters in the room, but I guess if that was allowed there would be no challenge in the game whatsoever.

As it is, though, you should go in expecting to be challenged. There’s a reasonably generous checkpointing system to protect you somewhat, but Penny-Punching Princess is downright old-school in the difficulty curve at times. It’ll frustrate and you’ll swear a lot, but thanks to relatively short levels, you’ll never find yourself stuck to the point that you just want to get out of the game. There isn’t too much to do between levels, though, which is disappointing. The enemies and traps that you recruit through a level can be used to build upgrades, and the armour upgrades that you invest in do more than boost your statistics; they also give you access to a range of different special abilities, and these range from buffs and heals to aggressive damage. It’s one of the few games where I found myself using equipment that didn’t provide the ideal stat boost because the special ability that the armour offered suited my preferred play style better. 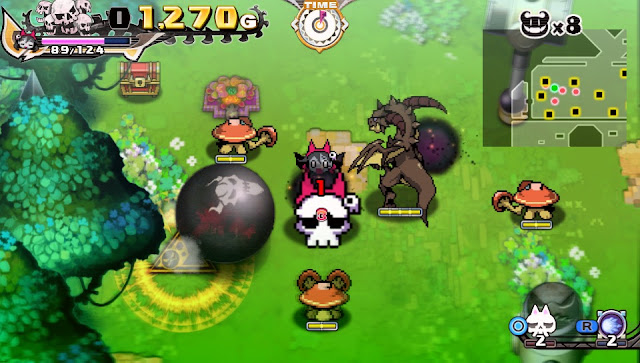 It’s the boss battles where things are most impressive, and Penny-Punching Princess’ bosses are something special. They’re difficult, and designed amazingly well, forcing you to make use of every resource at your disposal, every trap in the environment, and every additional monster hanging around. But you can’t buy them, and this is a serious inconsistency that the game introduces. Indeed, the very marketing of the title promises that “even a level 1 pleb can take down a tyrant.” All they need is money. Except that money doesn’t work on bosses. Yes, if there were a way to simply buy your way through a boss battle, the game wouldn’t be a challenge. But then, at least, the game would be making an actual point about capitalism. Too often Penny-Punching Princess gets halfway there to something truly unique and incredible, and then pulls back right at the last moment for fear that players would miss the point.

Levelling up the princess, meanwhile, involves tracking down special gold icons through a level. Like with the monster recruitment, the mechanics prove to be thematically at odds with the game’s premise; if capitalism rules over all, then why can’t my money be used to upgrade my character too? But while there’s the thematic disconnect, tracking down those icons does encourage you to thoroughly explore through a level, which, small as they are, would otherwise disappear far too quickly. Plus, as an added benefit, while you’re exploring around and not fighting enemies, the princess makes an adorable little walking noise.

It really is that presentation that kept me playing Penny-Punching Princess. Especially on the handheld screen of the Switch, there was the perfect balance between the size and detail of the sprites, and the minimalist elegance of environments in what is clearly a low-budget production. Playing on the Vita would make everything a little too small to be truly enjoyable, I suspect, but sticking the Switch in it dock and playing on the big screen would make the simple charm start to look cheap. Penny-Punching Princess was clearly designed for the handheld experience, so I highly recommend playing it that way. 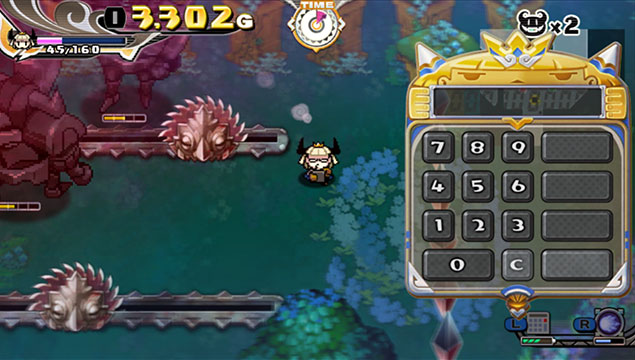 But none of that helps to overcome the fact that capitalism going wrong isn’t funny. It’s not funny in Japan, where people feel so indebted to their place of employment that there are cases where they work themselves to literal death. It’s not funny over in America where you only need to read the stories of people’s experiences in working for Amazon while Jeff Bezos sits on untold billions to know that there’s something deeply sick about the capitalist economic system. These are the things that Penny-Punching Princess is uncritically using for amusement when it lets the princess whip out her calculator and, for a few pennies, turn the things around her into slaves to be discarded at the end of it all.

Capitalism can be the source of bleakly dark humour. There are times that it’s done well. Over in the film and literature world American Psycho is a masterpiece in exposing everything wrong with this system. It is satirical and quite funny, and you can absolutely kick back and have a riot of a time watching it. But unlike Penny-Punching Princess it also makes a serious point while it’s entertaining.

I soured quickly on Penny-Punching Princess. I love the art. I love the combat. I found the sharp challenge and simple, clean mechanics to all be very enjoyable. But I just couldn’t get past how shallow it really was in the end, and how the game failed to live up to the tantalising promises made in its lede. It could have easily been a 5/5 game, but instead it’s one of the real disappointments in 2018.