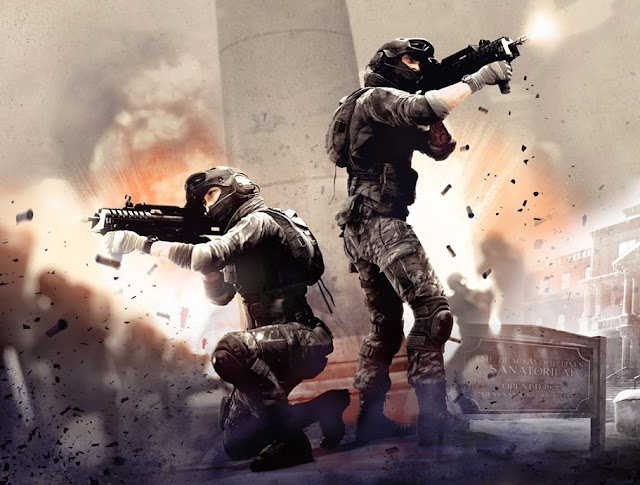 Under a very, very specific set of circumstances, Bravo Team can be good. If you’ve got one of those PlayStation Aim gun peripherals (the ones that shipped with the excellent Farpoint last year), and you’re willing and able to play online multiplayer with someone else who also has that peripheral, then you can enjoy your time with Bravo Team.

Related reading: If you’re looking for a good VR shooter, Farpoint really is worthwhile. Our review.

Otherwise, it’s almost unbelievable how terrible it is, given that it has come from a major publisher that is really trying to push VR technology out. As a military shooter, there’s going to be a lot of attention put onto Bravo Team, and it doesn’t sell VR well at all.

It’s basically a light gun game. You and one ally (AI or human-controlled) make your way from one cover point to the next. From there you pop out, shoot a couple of enemies, duck back behind the cover, reload, and pop back out again. Once the enemy ranks have been thinned enough, it’s time to move forward again. So you have limited control over movement, and you and your ally can operate independently; the developers clearly wanted players to work together to move through levels from a couple of different angles to set up flanking opportunities and the like. And, if one of you fall, the other can revive them by getting to their spot. Teamwork! 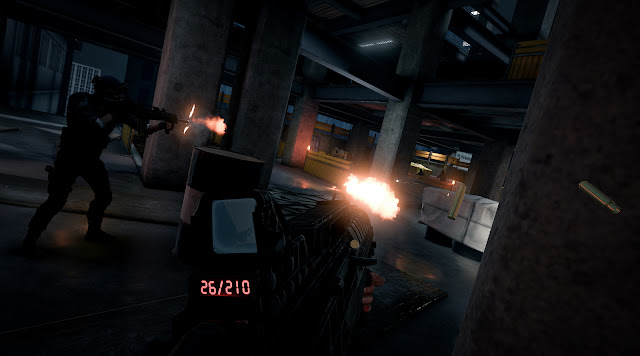 There are so many problems with all of this, though. Levels are highly restricted; no bigger than the standard corridors and rooms that make up most shooters. So it’s impossible to be genuinely tactical about your movement through the levels. Teamwork, consequently, is incredibly limited. For the most part you’ll be moving through levels together, taking out enemies together, and occasionally fighting back-to-back when enemies are coming from multiple directions at once. Bravo Team can be difficult, but not in a particularly engaging way; enemies don’t have great AI, and just deal (and can withstand) more damage on the higher difficulty settings.

The game also plays dismally, unless you’re using the gun-shaped Aim controller. That’s a peripheral that I imagine many people haven’t bothered with, given how few games support it, but it does indeed work well with Bravo Team, and it is genuinely good fun to pull off some rounds while holding this thing just as your in-game avatar does. Without it, though, you’re stuck with a jittery, laggy, unresponsive Dual Shock controller, and it fails completely to recreate the feeling of carrying a gun into battle. Bravo Team does support Move controllers, but it feels silly as sin to try and wave those things around, which indicates to me that there’s at least some cynical decision making in there by Sony, pushed on the development team at Supermassive Games – i.e. “we want to force people to buy and then use an Aim controller, so let’s make everything else not work well”.

But the game fails to justify its existence on any level over and over again, let alone be enough to convince people to go out and purchase Aim guns. There’s a tiny handful of levels, and they’re spectacularly uninteresting to move through. You’ll be done in a couple of hours, and the only incentive to come back is the higher difficulty settings and a score attack mode. Nothing about the level design will make you want to replay it, though. It’s all standard corridors in stock-standard environments, and, worse, they look incredibly artificial thanks to the nice, neat way that cover is neatly placed throughout. It’s actually embarrassing how arbitrary these levels are at a time when game developers are working hard to make their games feel more natural and less like a sequence of levels. 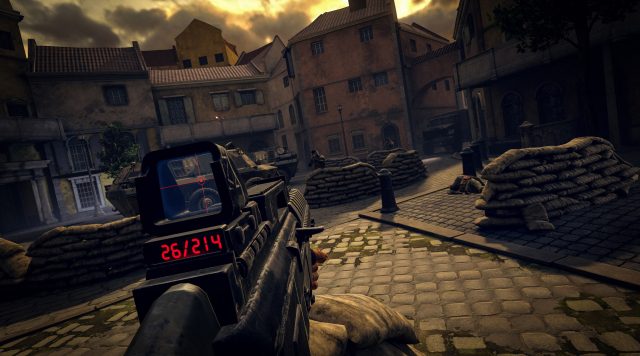 Even if the levels were designed nicely, there’s nothing to do in them, other than shoot baddies. While I get that Bravo Team is effectively a light gun game, it does a horrible job of immersion by focusing your attention directly in front of you for 99 per cent of the experience. You’ll have such tunnel vision that you’ll forget entirely that you’re in a VR world with the ability to look all around you. Farpoint had downtime, cut scenes, and a narrative, which made the alien environment that much more interesting to then move and fight through. Here, you get a “prologue” in which you find out that you’re military escorting a president across a bridge, when you’re ambushed and the president is killed. Then you need to escape. There are the briefest moments of storytelling afterwards, but it’s no exaggeration to say even the likes of House of the Dead have done a better job at telling a story. I didn’t care one whit about what happened in Bravo Team, or what was going on.

The only circumstance in which Bravo Team is much fun is when you’re playing with someone else who just doesn’t care about it. Chatting with a buddy while mowing down some enemies is very briefly entertaining, in very tiny bursts. But even then, the overwhelmingly shallow gameplay doesn’t take long to become draining, and even if you look beyond Farpoint (which has a decent multiplayer mode itself), games like Star Trek Bridge Crew are a far better way to spend time with friends.

Sony recently published the finest VR game that we’ve seen to date in Moss. That game is packed full of soul, creativity, wit and intelligence. It makes me very sad to think that Bravo Team will probably outsell it. And, worse, at a time where VR is still trying to establish its value as a gaming platform, high profile junk like this are only going to hurt it. As a demo, it actually works; when I played it for ten minutes in a controlled environment last year, I came away quite impressed with it. But those first ten minutes are Bravo Team’s limit, and Sony should have realised this and pulled the plug on the project as a commercial game a long time ago.