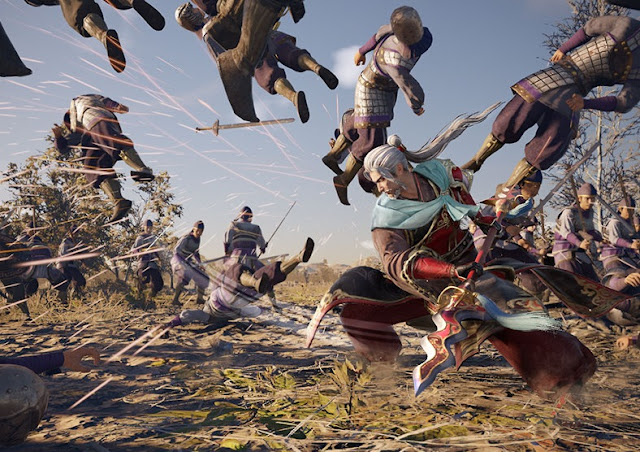 I’m a big fan of reading. I recommend it to all people. As much as the world seems to be moving away from the written word and books in favour of “in-depth” tweets at a whopping 280 characters, video games, YouTube videos of tasering rats, and then the high art of comic book action hero films, there is still value in an extended book that deals with a topic in depth, and helps people develop a deep knowledge of a subject.

There are a few games that are either based on a book, or based on a subject that has had books written about it, and I’m constantly amazed by how many people love a game, but then don’t feel a desire to learn more about where it came from. And indeed, I genuinely believe that a truly great game based on a subject should act as a launching point into a greater knowledge on the subject.

Given it is Dynasty Warriors 9 week, and Dynasty Warriors is the best example of what I’m talking about of all, I thought I’d kick a full week of Dynasty Warriors coverage off with some book recommendations for people who have enjoyed the respective games. Seriously, read them. You’ll find you enjoy the games that much more once you know the full story behind them!

Romance of the Three Kingdoms, by Luo Guanzhong (Dynasty Warriors): With the due disclaimer that this book is just shy of 2,400 pages long and you will spend a long time reading it, Romance of the Three Kingdoms is the most comprehensive historical account of ancient China you’re going to find. It has fabrications and historical inaccuracies, because it is a historical novel rather than a historical record, but the core is there, the major events did happen, even if not always in the way the book presents them, and from this book you’ll get a somewhat partisan but authentic understanding of who the major players were.

You’ll also come to realise just how perfect Dynasty Warriors is for that book – even more than the strategy Romance of the Three Kingdoms games. In that book the leaders took hundreds of thousands of troops into battle (a likely exaggeration given when the population of China would have been at the time), but most battles were determined in a duel between two great heroes. Just like in the game.

(The book I’ve linked to above is the abridged version which, at just 500 pages long, is a far better place to start)

Taiko: An Epic Novel of War and Glory in Feudal Japan, by Eiji Yoshikawa (Samurai Warriors): What Romance of the Three Kingdoms is to that era of history, Taiko is to Japan’s sengoku period, which is the topic the Samurai Warriors games deals with. Taiko is a little more focused on the life and times of a single general – the mighty Hideyoshi Toyotomi – but through him you get a sense for most of the major events through the sengoku period, as well as the major political and military players.

Where Romance of the Three Kingdoms is quite functional at times in terms of the writing and structure, Taiko is a far more beautifully written novel, with graceful, elegant prose. Its historical accuracy is also highly debatable at times, but, again, for the most part it’s authentic, and that richness in tone really makes it a page turner. It’s no exaggeration when I say this is my favourite book of all time.

Samurai William, by Giles Milton (Nioh): Nioh itself is only very vaguely based on history. It is, after all, a game about killing demons. But! But the story of a white guy from Europe ending up shipwrecked in Japan and becoming an important confident and ally to the most powerful people in the country is 100 per cent true and actually happened.

William Adams was a sailor from England around the time that the sengoku period was wrapping up. Adams found himself on a expedition around the world to try and establish a trading route with Japan. It didn’t go well, and he ended up shipwrecked and captive to Iyeasu Tokugawa. Somehow he managed to ingratiate himself to Tokugawa, and the next thing he knew was that not only was he not allowed to go back to England, but he was elevated to rank of samurai, given land and servants and became the first (and perhaps only?) white guy to do that. His story is simply fascinating, and I can’t recommend this book enough.

The French Revolution: A History, by Thomas Carlyle (Assassin’s Creed: Unity): The Assassin’s Creed games are all remarkably authentic to history. Obviously the real history didn’t have hooded men and women and templars going at one another in the interests of science fiction (as far as we know), but the settings and events that happen around them are all real periods of history. Every game in that series has a wealth of books that you can read about that time and place in history, but the one I’ve read and would recommend is The French Revolution: A History. Like Samurai William, above, this aims to be an authoritative take on the subject, rather than a historical fiction, and it is well regarded as being the most accurate of the hundreds of books that have been written about the revolution.

What Soldiers Do: Sex and the American GI in World War II France, by Mary Louise Roberts (Call of Duty: World War 2): Call of Duty was heavily promoted as a “work of history” in the lead up to release, and Activision were trumpeting how authentic it was to the time and period. If playing the game inspires some people to go and learn more about the history of the period, then great! Read this one.

One of the great fictions that we’re constantly fed through our “authentic” narratives of World War 2 is just how infallible the west was. Particularly America. We’re meant to see them as very much the Captain America figure – daring, heroic and pure, with freedom and liberty being their only motivation. The truth is… quite different.. and this book is just the start. Once you’re done with this, and have a better understanding of the rank-and-file, get into some books on the behaviour and attitudes of some of the “liberating” leaders of the time. Especially Churchill. That guy was a monster.

None of that is to suggest that the wrong side “won” World War 2, because Hitler and the Japanese did indeed need to be stopped, and were typically worse in their conduct, but history is doomed to keep repeating so long as people re-write the history to the point that it becomes nationalist propaganda. Which is what Call of Duty does. It’s important to read books like this one to bring some reality back into your understanding of the war, and understand that just because a side won, doesn’t make it above criticism.

Shinsengumi: The Shogun’s Last Samurai Corps, by Romulus Hillsborough (Hakuoki): Aside from the sengoku period, the other moment in Japan’s history that is wildly popular among video game fans and makers is the time that the Shinsengumi were active. A military police force as the power of the shogun was fading, they are a fascinatingly controversial group of people, and the personalities on display within the group make for some dynamic, exciting stories. There aren’t many books on the Shinsengumi in English, so you’re basically stuck with this one. It’s not well written, unfortunately, and partisan in tone, but you’ll still come away with a deeper understanding, at least, of how controversial the Shinsengumi were.

Kwaidan, by Lafcadio Hearne (Project Zero): Lafcadio Hearne is an important figure in the west’s understanding of Japan; he was the first to really start to collect the legends of old Japan and re-write them in English. He is perhaps best known for his collections of Japanese ghost stories, Kwaidan.

Japanese ghost stories work fundamentally differently to ghost stories in the west, and have a unique aesthetic and tone to them. That’s why Japanese horror looks and “feels” nothing like western horror. Reading through the stories in Kwaidan, you’ll get a sense of that; for the cultural and social values of Japanese ghost stories, and their unique traits that make them so different. In other words, after reading through these, you’ll have a greater appreciation for the heritage where games like Project Zero come from.

Yakuza: Japan’s Criminal Underworld, by David E. Kaplan (Yakuza): We all know that the Yakuza games are very much fabrications, designed to appropriate the tradition of B-grade yakuza films as much as they’re drawn from any true yakuza stores. But the yakuza are absolutely fascinating in that the role they play in Japanese society, and the relationship they have with the population and police alike, is quite unlike any other mafia, anywhere else in the world. This book is a cracking read that demonstrates that often the truth is stranger than the fiction.

Indeed, you can be almost certain that the creatives behind the Yakuza games have read this book. It’s a standard reference that is well renowned for being a spot-on analysis of organised crime in Japan (that was so accurate as to be controversial enough to be banned in Japan for five years).