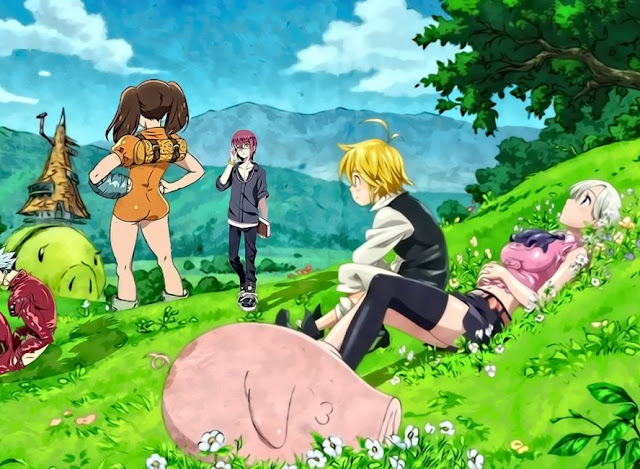 Anime tie-in games are a tough gig now. Fans have expectations, and as we’ve seen with the likes of Persona 4 Arena, Arslan: The Warriors of Legend, and Dragon Ball FighterZ from earlier this year, it’s no longer enough to simply provide a workable gameplay system and sell the game on the strength of the license. Now, fans know that developers can take a license and the relatively restrained development budget and do something of a very high standard. Yes, now, fans have expectations.

Related reading: The other recently released anime tie-in game is Dragon Ball FighterZ, and it is spectacular. Matt’s review.

The Seven Deadly Sins: Knights of Britannia is a throwback to those days where anime games weren’t stand out examples of their genre. There’s nothing outright bad about the game. It’s a riff on Koei Tecmo’s Dynasty Warriors formula, and there aren’t many developers that would even try and take that genre on. It’s actually not easy to make one of those games. So kudos to the developer for making a very playable game. But, ultimately, The Seven Deadly Sins feels shallow and too limited for its own good.

It does do a decent job of pulling your through the plot of the anime, though. Truncated by necessity (the anime’s far too long to directly translate into a game), The Seven Deadly Sins does just enough to allow players to understand the broad strokes of the major plot points, and get a vague sense of the characters. There’s no depth to the narrative because it scattershots through everything, but ultimately this one was made for fans of the anime, who will already know the plot, and the story does enough that players will know where in the story they’re up to.


As mentioned above, the game itself is a riff on the Dynasty Warriors formula. In most levels, you’ll take control of a hero and be tasked with either defeating a few dozen common enemies, or a single boss enemy. To do so you’ll pick one of a dozen or so characters (starting with just the two, and expanding out as you recruit more). And you’ll generally have an ally controlled by the AI to help out.

Each character fights slightly different to one another, and has a standard mix of weak, strong, ranged, and power attacks as it standard for the genre. All of this works quite nicely. On the field the characters move fluidly, and the combat is certainly pacey. Once you can get into a rhythm, mowing down hordes and dashing from enemy to enemy so that there isn’t a break in the fireworks does feel really good. But there also are issues with the combat. Many issues.

The first is the simplest; levels are over in a matter of seconds, and aside from the boss battles, there’s absolutely nothing threatening about them. As long as you have your character equipped with appropriately powerful gems (and more on that in a moment), you’ll breeze through each and every level. Even if the enemies get some strikes in, you’ve got of plenty of health, and importantly, time to waste some seconds when you know that once you do get on a roll, you can wipe an entire level’s worth of enemies away in a couple of moments. Because all these battles are so short, the game also never gets into an enjoyable rhythm; not when you spend almost more time in loading screens. 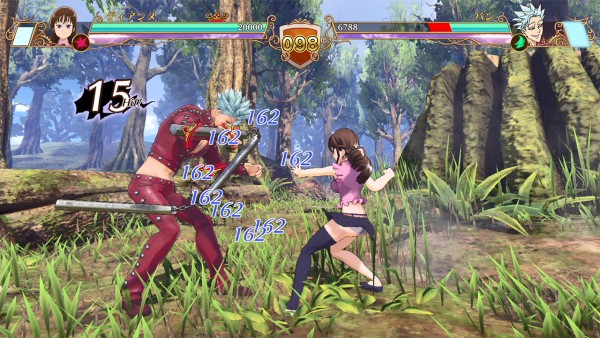 The combat system also lacks in the kind of nuance that has worked its way into more recent Warriors games, and while this isn’t evident when you’re battling hordes, the boss battles are painfully simple. Blocking and dodging are clunky, to the point you’ll actually find it easier to simply take the hit and wait for a moment of recovery to strike back. Coupled with the extreme speed and fireworks of these battles, it can be difficult to track what’s going on, too, which makes them frustrating.

More amusingly these one-on-one battles seem to be where the developer felt the appeal of the game would be, as they comprise its multiplayer mode. I can’t see anyone playing this in the long term, but dedicated fans of The Seven Deadly Sins might find some temporary amusement out of it.

The other really big issue with the game is the skill tree. It looks like a standard JRPG skill tree at first, but stuff isn’t unlocked with resources such as experience. Instead, with each quest or subquest you complete, you’ll get one “special” item, which can be used to unlock something on the skill tree. And this in turn means you’ll need to play all kinds of subquests just to get items to unlock skills so you can access the skills on the tree that you actually want to use. It’s an aggravating system, and an example of very poor design. This game forces you to grind through sub missions, which by rights should be optional, for the requisite materials for critical unlocks on the skill tree. 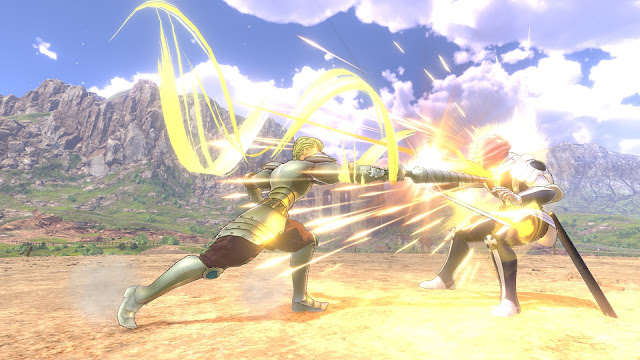 All said, The Seven Deadly Sins is a fun anime franchise, and that sense of fun does translate to the game. It’s not a perfect game by any means, and has some genuinely aggravating elements, though, and that means it is going to be one that only fans of the franchise are going to enjoy.