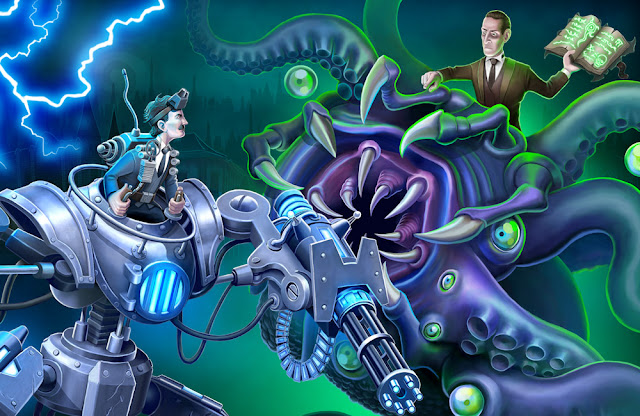 Nikola Tesla and H. P. Lovecraft have both had their share pop cultural appearances over the years. Tesla’s electrical inventions and proposals for weaponised electricity have inspired many a character and video game weapon over the years, while almost any work of horror carries some degree of influence from Lovecraft’s indescribable cosmic horrors. It was probably inevitable that at some point in time, somebody would bring the two together.

Enter Tesla vs Lovecraft, a twin stick shooter that sees Tesla facing off against hordes of eldritch monsters across the streets of Arkham. The reasons for their feud aren’t clear; a brief opening cutscene shows Lovecraft burning down Tesla’s lab just before a big demonstration, but that’s about the extent of the game’s narrative.

That’s my biggest frustration with the game. Bringing together the legends of Tesla and Lovecraft could have opened the door to a deep, thought-provoking story, or at least a dramatically entertaining one. Instead, those influences are kept as superficial as possible: cool weapons and weird monsters. Considering how much philosophical depth there is to Lovecraft’s work (racism aside), it’s always a shame when a Lovecraft-inspired game begins and ends with “wow, isn’t this monster bizarre-looking”. 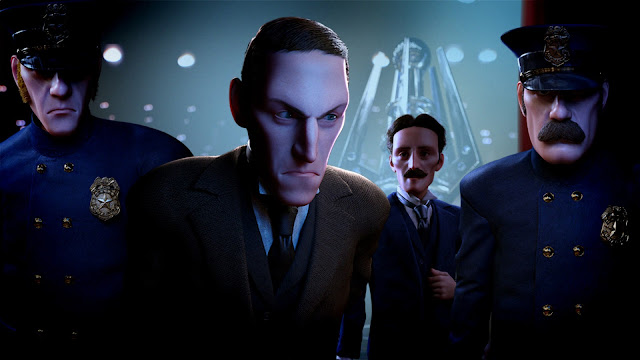 This is especially disappointing here, considering how well Tesla and Lovecraft should go together. In the one hand, you’ve got a brilliant inventor who made huge contributions to the world but who’s been legendised as a sort of mad scientist with a penchant for creating deadly experimental weapons. On the other hand, you’ve got a body of literature that’s fascinated with the insignificance of humankind on a cosmic scale and the folly of ambitious scientific endeavour. There’s a complex, exciting story just waiting to be told with this contradictory ideologies and historical legends, so Tesla vs Lovecraft’s lack of anything of he sort feels like a huge missed opportunity.

Instead, it’s a run of the mill but well put together twin-stick shooter in Lovecraftian dressing. You play as Tesla, fending off wave after wave of monsters with your electrically-charged weapons and gadgets. The goal of each level is simply to kill all the monsters and not die—a horde mode, essentially. Once the last wave is taken down, it’s straight onto the next level to do it all again.

Enemies come thick and fast, and the only way to survive is to make good use of power-ups that regularly spawn across the map. Often these are different weapons, from a simple revolver to a shotgun that fires a spread of electrical parties. Sometimes, you’ll find limited-use special moves, like a shockwave or a souped up frisbee that bounces off walls. If you’re lucky, you’ll find a health pack. 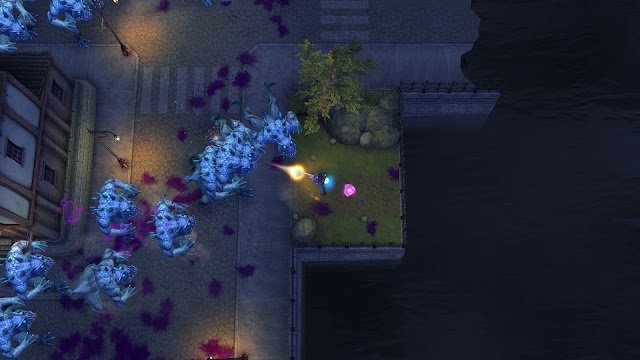 The most important items you’ll find, though, are pieces of Tesla’s mech suit. When you collect six of them, you get to use said suit for a short time, making you invincible and far deadlier than regular old Tesla on foot. Unlike the other items, there’s always one mech piece on the ground—pick it up, and get spawns immediately somewhere else—go much of the game revolves around tracking down those pieces, trying not to get overwhelmed along the way, and then culling the herd when you finally get to jump into your mech.

Each stage also has a discrete levelling system, through which you gradually get stronger as the battle goes on. You start each stage at level 1, and earn experience by killing enemies; earn enough, and you level up. With each level up up, you get to choose one of two randomly-selected perks, like increased shooting speed or an increase in max health. Some of these perks are more useful than others—a faster fire rate is nice, but it’s got nothing on health regeneration over time or bullets that can lead through enemies.

All these perks accumulate over time, too, so if you get lucky you can make yourself very powerful indeed—a few stacks of a perk that adds an extra bullet to your every shot, coupled with one that makes shots ricochet off walls and your preferred automatic weapon, you turn into a walking turret of death. The trade off is that a run of bad luck can leave you far too weak to actually deal with what the game throws at you, leaving you with no way to avoid death by sheer weight of numbers. 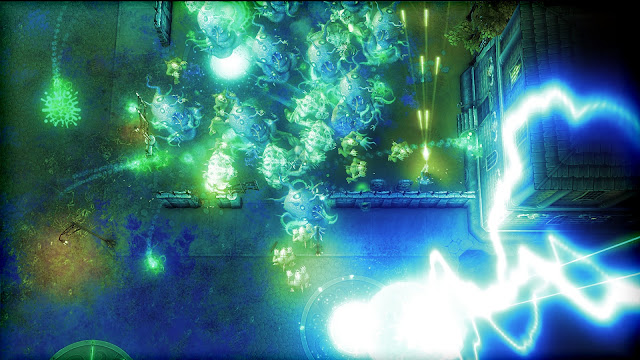 As you progress through the game, you unlock new perks and power ups (though given the game’s systems, you still have to rely on lady luck to actually give you a chance to use your new unlocks). These are tied to your overall kill counts off each different monster type in the game: once you reach a certain threshold for a particular enemy a new perk or power-up unlocks, with the tougher monsters and higher targets naturally leading to better stuff. It’s a simple system, but it adds a neat layer of progression and variety to a game that would otherwise get very stagnant.

On that note, the levels leave something to be desired. There are 30-odd different stages, but only a handful of maps that get reused repeatedly throughout the game. None of them are especially noteworthy, and any little details end up getting drowned out by the hordes of monsters anyhow. The enemies themselves suffer the same problem; despite how iconic Lovecraft’s monstrosities are, they tend to lose all sense of identity here and just get lost in the crowd.

Tesla vs Lovecraft is enjoyable enough for what it is: a simple, energetic twin-stick shooter fat doesn’t push any boundaries but gets most of the fundamentals right. At the same time, there’s so much untapped potential in the idea of Lovecraft/Tesla crossover, and that leaves me wanting so much more from this game than it actually delivers.

Why I don’t care about frame rates