Explore the mythology of northern Mexico’s indigenous people in Mulaka

I am beyond excited about this announcement, and having to sit on it for a couple of days has been driving me crazy. Developed by Lienzo, Mulaka is a title inspired by the Sierra Tarahumara region of Mexico and the indigenous people that live there; Matt first wrote about it when it was being crowdfunded. But there’s new news (ha) — a release date! Here’s the trailer:

The developer has taken care with the legends of the Tarahumara people in order to preserve the culture. Mulaka is an action-adventure platformer that also utilizes hand-to-hand combat. The landscapes featured are also inspired by the region and rendered in one of my favourite styles, best described as low-poly.

Upon reading about Mulaka, my mind immediately linked it to Never Gone, the game about aboriginal mythology in Alaska that was created with the help of the indigenous people. We’ll see how Mulaka stands on its own when it is released on PC (via Steam) and PlayStation 4 on February 27, Nintendo Switch on March 1, and Xbox One on March 2. Lienzo has committed to donated part of the game’s profits to NGOs that focus on the Sierra Tarahumara region.

So… this is a Kickstarter you should probably back

A Light in the Dark is a really good looking visual novel, and it’s looking for your support on Kickstarter. Being brought to us by Sekai Project, it’s looking for just over $35,000 Australian. With 28 days to go, it has already got $14,504 in pledges, so things are looking pretty good.

This is a suspense visual novel, staring Hao-Chen Jiang, who wakes up in an unfamiliar room. Things get worse for him when he discovers that his arms are tied up behind him… he’s been kidnapped!

The game follows Hao-Chen’s story as he struggles to survive his kidnappingand ends up building a relationship with his kidnappers and comes to understand just what they’re about. With gorgeous art and plenty of promise, this is one Kickstarter that we hope hits its goal.

World of Tanks isn’t so bad. Actually, it’s quite a good game, as free-to-play stuff goes. But it’s missing something. Something very important. Cute anime girls.

That’s where Girls und Panzer comes in. This game, which releases on PlayStation 4 on February 22 in Japan, and February 27 in English in South East Asia, features tank-on-tank action, but with a far less realistic palette than World of Tanks, and far more anime colours.

It’ll also have more by way of single player play, which is good for those of us who aren’t that keen on the ridiculously competitive online experience that World of Tanks offers. You’ll probably need to import this one if you’re keen on it, but as you can see from the trailer, it actually looks really quite good!

Originally released for PC in 2013, Karumaruka Circle is a visual novel set at Seikai Academy. Kaito finds himself invited to join the star-crossing circle. 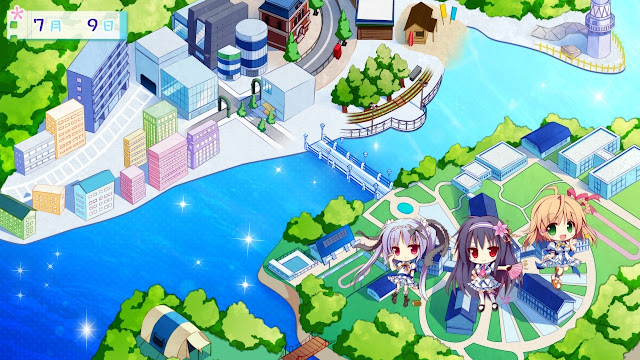 The girls in the group are all, er, peculiar in their own way. To be fair, Kaito is as well: he is known for being an energetic turtle-toting underclassman. Annually, on the night of Tanabata, the star-crossing circle gathers to try to access Karumaruka. If they succeed, they will be freed from their curses. Sounds eerie.

Karumaruka Circle will be released on PlayStation 4 in Japan on May 24. Aside from the past PC version and this upcoming PS4 version, there was a PS Vita release of the title last June. There are some very expletive scenes so you’ll want to play this one after the kiddos are asleep!