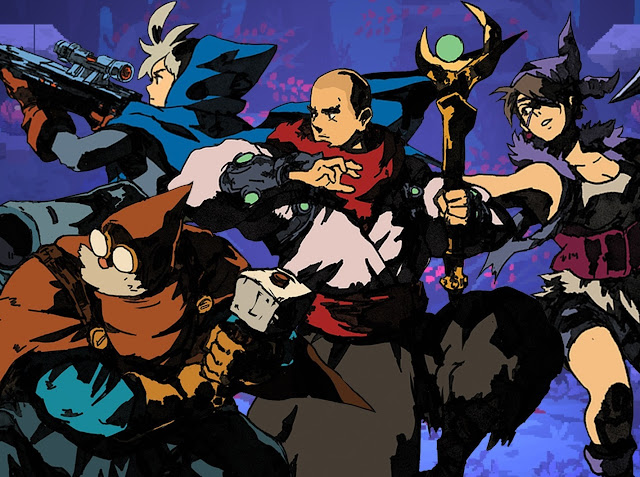 The tower defence genre has greatly faded in recent years. Back when mobile games were a newer phenomenon, tower defence games provided developers with a cheap way of providing players with a challenging tactics strategy experience. There was a time where every developer was creating them. Even the likes of Square Enix came out with an excellent Final Fantasy Tactics-themed one in Crystal Defenders.

Nowadays it’s unfortunately a genre that only the developers of free-to-play or shovelware really take seriously. It’s a pity because I like a good tower defence game. The genre does persist to an extent in hybrid form, however, and it’s the tower defence bits of Aegis Defenders that almost make the painfully weak puzzle platforming worthwhile.

This is a game that takes itself quite literally when it says it’s “half tower defence, and half platformer.” Too literally. You’ll spend half your time navigating through the world as you would a stock standard 2D puzzle platformer. Then you’ll spend the other half of your time playing a 2D tower defence game. The transitions between them aren’t subtle (actually, they’re quite jarring), but on the plus side the promise of a tower defence section, completely independent of the platformer bit, does give you something to work towards whenever the platforming starts to drag. 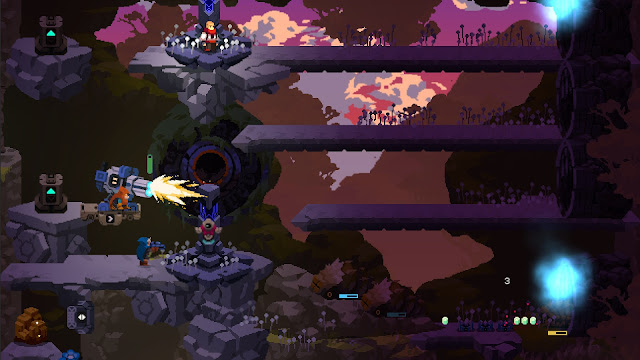 For the platforming sections, you’ll have multiple characters to juggle, and each of them have their own special abilities, and you’ll need to use the two in concert to flip switches, defeat enemies, and push through barriers. As a neat touch it is possible to play this in local multiplayer, split screen and all, and there’s a nice element of co-operation in working together to figure out how to collect the less immediately accessible bits of treasure that are placed around the level, or are hidden entirely.

But I’ll be blunt here; I can’t stand this kind of stuff. It looks pleasant enough in that stock standard “modern retro pixels” style, and it’s mildly diverting to play with a friend, but I find this kind of action flat, uninspiring and, ultimately, dull. For these kinds of puzzle platformers, enemies tend to be part of the puzzle solution (rarely), or an arbitrary inclusion that doesn’t really add challenge or interest to the game. With there being a minimal risk of “death” as such, the challenge comes from the puzzles, but these are designed in such a way that they break with the flow of the platorming and drag the pace of the game down. For Aegis Defenders, specifically, the puzzles aren’t particularly mind-bending either, and I’d be surprised if even the most ardent fan of the genre considered any of this game’s level designs to be particularly memorable.

But this is offset with those tower defence sections, and they are delightful. You’ll start out with a very limited ability to construct basic defences, but as you play on you’ll get access to an increasing range of abilities… with increasingly complex waves of enemies to try and stop from reaching an artefact in the middle of the playfield that you’re tasked with defending. 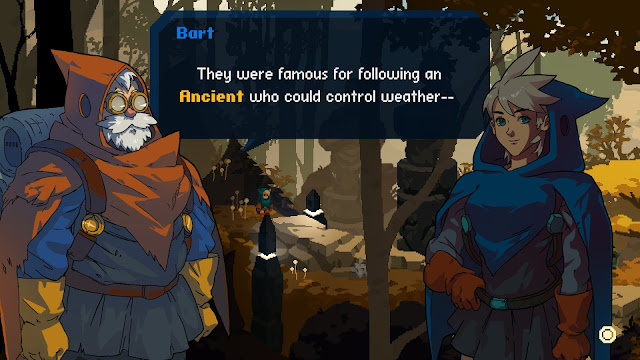 Before each wave you’ll a short period of time to run around the area, collect resources, and then use those resources to build defences. Each character builds different kinds of defences (turrets, traps, etc), and these are colour coded, with a trap doing more damage to an enemy of a corresponding colour. Of course waves of enemies will appear from a couple of different locations, so you’ll need to make sure that your limited resources cover as much as possible. When the waves attack, you’ll also be able to control your characters, who have weapons that can aid in the defence, or the ability to repair defences that are damaged.

In single player, this can become quite stressful, as you’ll need to keep swapping between characters during the “build” phase, and then place the unused characters in strategic locations, just as though they were turrets during the combat phase so they can auto-attack to maximum effect while you control the other. Unlike the game’s puzzle sections, the tower defence bits can put up a stiff challenge, particularly if you’re playing by yourself in this way; you’re always going to be mindful that the utility of whatever character you’re not using is limited. In co-op, Aegis Defender’s strengths finally come to the fore in the tower defence mode. Working together to set up a plan for the defence of an area, and then each taking control of a character to try and help out in the combat phase is a hoot. Ducking back and forth to shore up weaknesses or help our your ally when they’re in trouble benefits from the rapid pace in which hordes attack, and as each character has particular strengths over different kinds of enemies, you’ll constantly be barking out to your partner to come deal with a beastie that your own character struggles to deal with. Play well, though, and local co-op is a challenging in the right way, and very rewarding indeed.

I can’t remember the names of any of the characters, though, and that goes to highlight another of this game’s weaknesses; it really doesn’t do a great job in character or plot development. There’s a surprising lot of plot to work through, but aside from being vaguely aware that you’re playing as treasure hunters, I quickly came to the realisation that this one won’t be winning awards for doing anything with its narrative. I also found the efforts to make the characters humourous and quicky to generally fall flat. 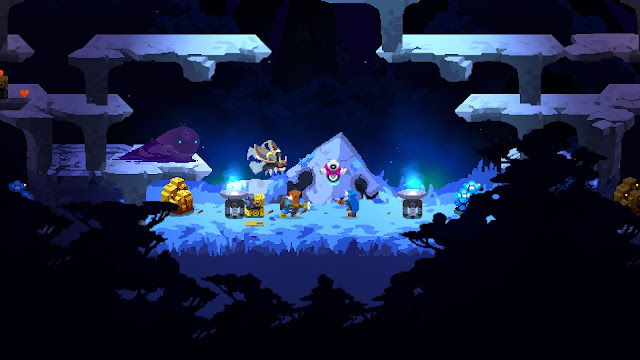 If the developers were to take the tower defence sections and spin that into an entire, dedicated game, Aegis Defenders could be really something worthwhile. That side of the game is truly enjoyable. But it’s let down by trying to be something more than that, and the platforming and “exploration” elements just don’t gel well with the good stuff to make this game as cohesive as it needed to be.

Cthulhu Tactics is just the best idea for a video game