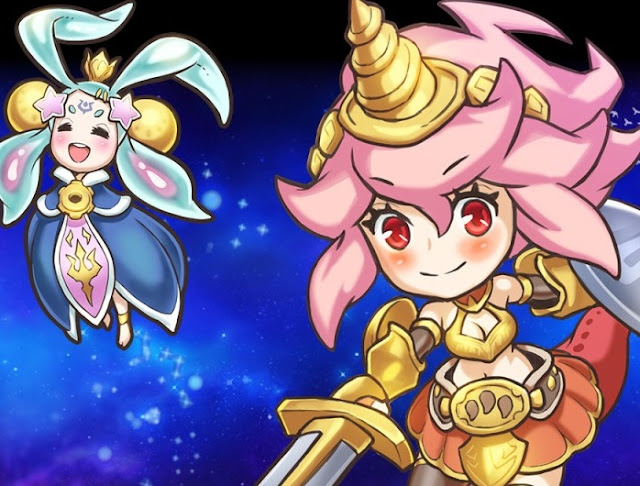 There’s a first for everything. I never thought that a poor translation would ruin a game. There are certainly poor translations of Japanese games out there; I grew up in those heady days with Square before it became Square Enix and I remember what Final Fantasy was like back then. There are also translations of modern games that I don’t agree with, or think aren’t done with appropriate reverence for the intent and meaning of the Japanese script. Through all that I never thought a translation would render a game almost unplayable. But then I played DragonFangZ.

Related reading: Another classical roguelike on the Nintendo Switch that is really worthwhile is Yodanji. Matt’s review.

As someone who bought a Nintendo Wii in no small part because of Chocobo Dungeon, I have a real soft spot for genuine roguelikes. By “genuine” I mean stuff like the Mystery Dungeon framework – Shiren the Wanderer et al – or Rogue itself. Not the innumerable indie games that call themselves “roguelikes” because they have randomised level design. DragonFangZ is a genuine roguelike, and is indeed presented in a similar way to Chocobo Dungeon. The game is appealingly bright and colourful, with adorable enemy designs and a 3D isometric visual aesthetic that is really easy on the eyes.

It’s challenging enough, too. As with any genuine roguelike, you’ll start play each time at the first level and no equipment. The goal is to get all the way down to the 30th dungeon level. It took me hours to get past the first ten, and the difficulty kept escalating from there. Admittedly I probably could have been more careful at times as genuine roguelikes do like punishing stupid mistakes, but there were other times that the “everything is random” nature of a genuine roguelike meant the loot I was getting just wasn’t useful. One time I got to the ninth floor and was killed because I had found a boatload of useless staves throughout the quest, but no weapon or shield whatsoever, so my poor, wounded character was still trying to deal with enemies by feebly swatting at them with her fists. 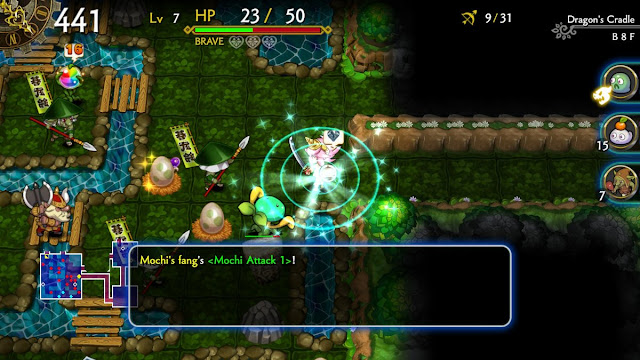 Anyone who enjoys genuine roguelikes knows to roll with these punches and accept that sometimes an attempt at a dungeon is just going to fail because the gods of random chance are fickle beasts. When the character perishes you’re given a score (and a leaderboard, though sadly there’s no online score sharing like there should be), and you’re returned to the start of the dungeon to try again. About the only way that you’ll feel like you’re making progress is that sometimes you will discover a special chest within a dungeon that allows you to put items into it, and they’ll appear in a warehouse at the very top of the dungeon for you to collect and take into your next dungeon run. So, if your character’s about to run out of health, have her drop her best bit weapon into a chest, and then, rather that lose it, you’ll be able to use it for your next attempt.

All of this will sound very familiar to veterans of genuine roguelikes, and that’s exactly what it is; it’s a very no-frills and straightforward example of the genre… with one exception. As your character defeats enemies, they might drop “fangs” which she can equip. Those fangs each have a countdown ticker and when it reaches zero, can be used to perform powerful attacks that can really get you out of a tight spot. The catch is that you can only get the ticker to count down when the hero fights enemies while standing in the middle of a room and there are no walls adjacent to her from any angle. This forces you to take some risks and fight battles in the middle of rooms, when there might be enemies attacking from multiple fronts, when standard roguelike strategy is to retreat out of a room and into a corridor where you can attack an enemy one-on-one without worrying about being flanked.

As simple as it sounds, that slight twist to the formula to the Mystery Dungeon roguelike really helps DragonFangZ stand out as something original, different, and interesting. Genuine roguelikes don’t do a great job of differentiating themselves from one another, generally, so the fact that DragonFangZ does deserves major credit to the development team, and the portability of the Nintendo Switch it yet further, as minimalist storytelling and superfluous exploration makes the roguelike the JRPG genre of choice for travel or lunch break downtime. 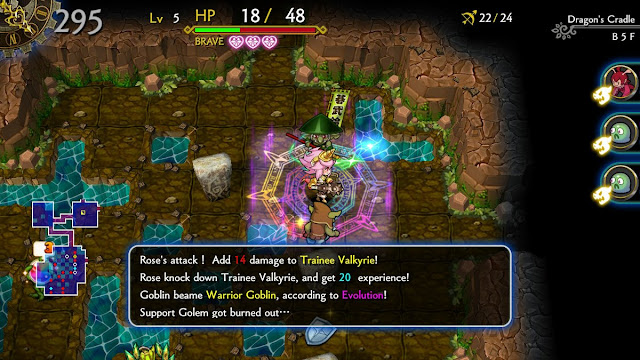 Localisation kills the game, though. It completely kills it. Roguelikes might have minimalist storytelling, but that makes those moments of storytelling all the more important. You don’t need to write an epic narrative to tell a charming, interesting story, and Chocobo Dungeon and Shiren the Wanderer have both proven that many times over. But I can honestly say that I have no idea what kind of story DragonFangZ is telling because none of it makes sense. Here’s some pearls that could only have come from a very rough run through the fortune cookie option in Google Translate:

“Not a single dust left. Seems like one of my skills has reached the extreme again.”
“That is precaution is important. You seem to be a considerable expert”
“Well! Presence or absence of glasses involves life and death! Rose helps her!”

I’m not exaggerating to say that I gave up trying to follow whatever story this game was trying to tell within the first hour, and that means that what I ended up playing was absent of any real context or purpose. I didn’t even pay attention to the reason that my hero was trying to traverse the dungeon in the first place, which made the whole experience a nightmare twist on the Sisyphean story where the poor dude didn’t even understand why he was rolling his boulder up the mountain. You’ll know just how much of a roguelike fan you are if you play this and decide that the gameplay loop is compelling enough that you’ll keep playing even divorced of context. 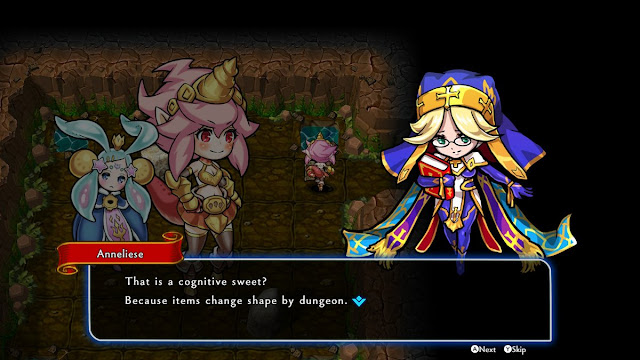 The game’s even worse on people who aren’t fans of roguelikes, though, because the tutorials and every bit of critical information is written in equally poor (no, outright broken) English. This isn’t an issue for me. As a veteran of a thousand genuine roguelikes I can nut around for a bit, figure out the slight twists to the base formula on my own, and from there I’m sailing through any roguelike I might come across. But someone less familiar with the genre will find DragonFangZ’s equivalent to the “hunger” system, the equipment system, and the function of most of the items incomprehensible because absolutely nothing is written it a way that makes sense on any level.

Related reading: A game theory on the roguelike and absurdity.

What’s even worse is that apparently the game has actually been patched so that the translation is an improvement on what came at launch. How a developer could possibly think it’s a good idea to release a game without a basic translation job done on it is beyond me, but to be so out of touch so as to not get it right on a second attempt is just embarrassing. There are so many localisation specialists in the games industry – especially for Japanese to English projects – that there’s simply no excuse for any of this.

Somewhere down the track DragonFangZ might be patched again, and if, at that point, it’s comprehensible enough to tell its minimalist story in a compelling manner, and get its tutorial in order, then it might well be worthwhile. It has all the presentational and gameplay elements it needs to be really great. But this developer’s track record isn’t there, so what we’ve got here is a game with a translation bad enough that it effectively breaks the game.