Next Up Hero is a strange beast to describe. It’s fundamentally a twin-stick shooter, but with elements of hack-and-slash, hero shooter, roguelike, and asynchronous co-op, it’s unlike any any other twin-stick shooter I’ve played.

The game takes place within a world of songs, hitch is under attack by a strange, evil presence known as the Ceaseless Dirge. The prince Quinn and a farm girl called Ovalia take it upon themselves to investigate the corruption, fighting the Dirge’s hordes by “singing to life” incarnations of the world’s Legendary Heroes.

This sets up the core of Next Up Hero: with one of nine heroes (in the current build), you venture out into procedurally-generated map to fight the Dirge’s monsters, trying to get as far as you can before you inevitably die. Then you try again—perhaps with the same hero, perhaps with another—and, ideally, you make it a little bit further thanks to a combination of meta progression systems and growing familiarity with the game. So far, so familiar, but where Next Up Hero stands out is with its inventive multiplayer systems. 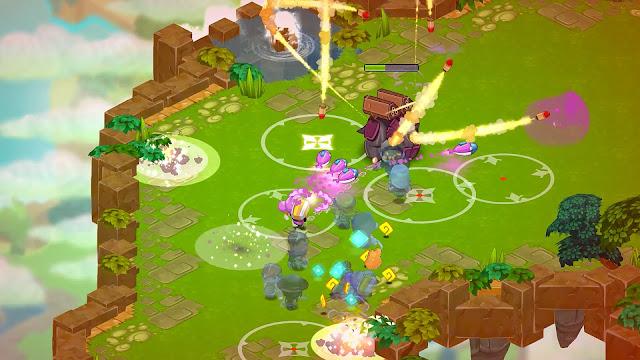 When you start a new run, you can generate or own venture to undertake—you can, but most the time, you won’t. See, every time a player spawns a brand new run, it gets added to a library that other players can then browse and play, and the more players that play a particular quest, the greater everyone’s chance at success becomes.

There are two reasons for this. Firstly, every time a player dies, they leave behind an “Echo” that subsequent players can revive. Revive an Echo and it will follow you around, attacking enemies (albeit with significantly reduced damage) and serving as a distraction. You can amass an army of up to 15 Echoes, apparently, though I’ve never gathered more than nine or ten. More importantly, Echoes provide energy to summon powerful Ancients that buff your hero or weaken enemies—though doing so consumes any ghosts used, so you want to be careful with how you use them.

Secondly, when enough players reach a certain level within a venture, they create a community checkpoint that allows by future players to start from that point. Bosses work similarly; it’s very difficult to me down a boss by yourself, but doing even a little bit of damage means the boss will be weaker in future runs. By everyone’s collective effort, you can be victorious. 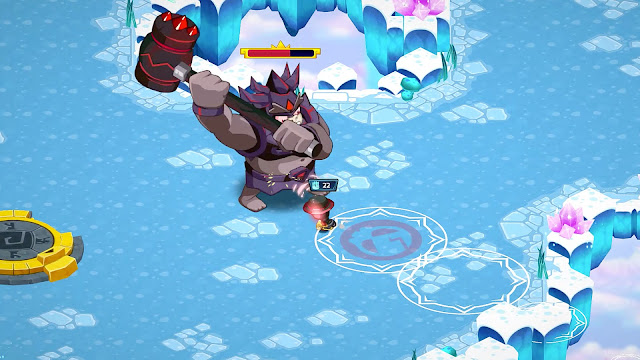 It’s a fascinating setup. You never actually play alongside another player directly, and yet the whole game fosters a sense of cooperation and camaraderie that outclasses pretty much any other multiplayer game I’ve played. That alone is enough to keep me coming back.

Each venture is made up of anywhere from 10 to 100 levels (possibly even more), and each of those levels has a particular goal you have to achieve before the exit opens up. Often its simply a case of eliminating a certain number of enemies, but others have more tricky requirements, like finding and killing a marked bounty that gets stronger every time you kill another monster, or finding your way through a maze shrouded in darkness.

Combat works more or less like it does in any other twin-stick shooter—move with the left stick, aim with the right, shoot with the trigger—but the heroes bring a lot of variety into the mix. Each one has unique main, secondary, and special attacks, which are enough to make them all feel unique. The default hero, Morta, shoots rockets and can drop a bomb from the sky. Vale is a ninja-like melee character who can use stealth to land big hits. There’s a guy who can drop turrets, a girl who throws boomerangs, and someone who can create a whirlwind by playing bongos. They’re an eclectic bunch. 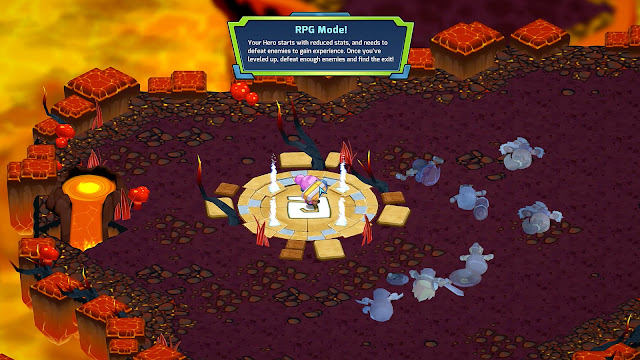 The cheerful, bright artwork brings them all to life brilliantly, too. They’re decidedly cartoonish, with big heads, big weapons, small bodies, and no legs. Despite their diminutive forms, each hero has enough personality in their visual designs to stand out and be instantly recognisable. This is true even of Echoes, translucent and blue-tinted though they are.

For their part, monsters look almost like they could be Pokemon, leaning heavily towards the cute and creative side of the scale. There isn’t a huge amount of different enemy types at this stage—20 or so, by my count—but one neat touch is that there are different versions of each monster for each of the three environment types. They’re mechanically identical, but the palette swaps help to give each different biome its own sense of identity.

My one gripe with Next Up Hero as it stands is with the controller mapping. Attacking is bound to the triggers by necessity, so that you can keep your thumbs on the analog sticks at all times. However, there’s no rapid-fire option, so attacking quickly—something vital for most characters—means mashing away on the triggers, which gets very tiresome (and painful) very quickly. Rebinding the attack input to one of the bumpers can help a little bit, but a far better solution would be rapid-fire ten you hold the trigger down—something that’s pretty standard in twin-stick shooters. 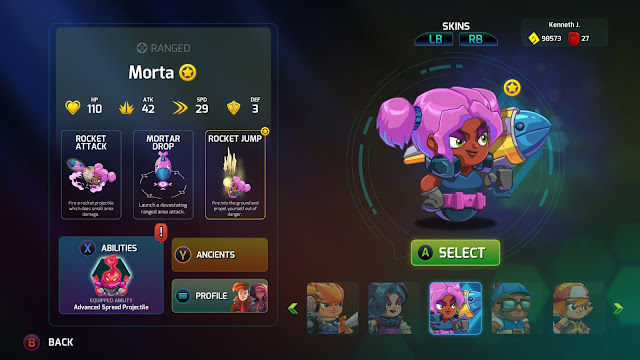 Alternatively, you can play with mouse and keyboard, using WASD to move and the mouse to aim and shoot. This is a little bit trickier, since Next Up Hero is a game designed primarily for the game pad, but it does work if mouse and keyboard is preferred or only option.

That little bugbear aside, Next Up Hero is a game I wholeheartedly recommend. Even in its current Early Access state, its remarkably polished and feature-rich, and the way it implements asynchronous multiplayer elements is unlike anything I’ve ever seen. Like I said before, I’ve never played any other game that felt so fundamentally cooperative, not just in mechanics but in the way it fosters a community spirit, and that’s absolutely something to be commended.