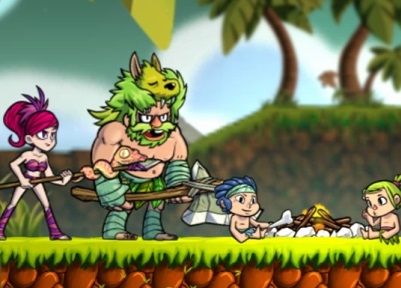 Caveman Warriors is a game which wears its influence on its sleeve. Developed by Spanish studio JandaSoft, it’s a co-op platformer with four characters, each with unique abilities which will need to used together to navigate a variety of far-fetched levels. Listing games like New Super Mario Bros., Joe & Mac and Trine as inspirations, I said to myself “yeah, I can see that” within minutes of playing. This also becomes the game’s biggest shortcoming – its desire to replicate the feel of many retro games by cherry picking mechanics is hampered by its failing to understand the context which made those mechanics engaging.

Mechanically, the game is very standard. It’s a platformer with four characters, where each of the four characters has a regular jump and a super jump, a basic attack and two special attacks. Some attacks offer ways to hit enemies at range, some interact with the environment such as breaking walls or creating platforms, and others can block enemy projectiles or attacks. It’s an interesting system, but I find that the level design makes it feel like a contrivance sometimes – occasionally you’ll reach a brick wall and you’ll just have to switch to the wall charge guy, other times the only way to advance is to lodge a spear in a cliff face. I was hoping for moments that would be more organic – enemy patterns which would be more easily dispatched by one attack type for example – but the variance in super attacks just isn’t diverse enough to facilitate that.

The game is broken up into worlds which are decently long, guiding players through eclectic environments such as the prehistoric age, a WWII battlefield and outer space. It feels distinctively Metal Slug in that each level has a strong visual and gameplay theme, and it helps to make gameplay more memorable. Each level is peppered with baddies, platforming challenges and culminating in a satisfyingly designed boss. 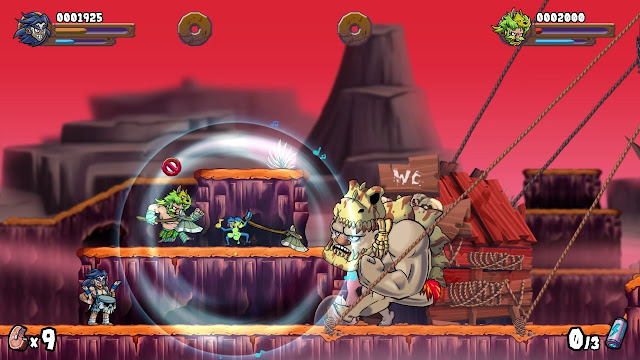 One of the biggest shortcomings I encountered were the game’s hitboxes. Looking at the game’s inspirations – Castle Crashers, Metal Slug and Super Mario Bros, it’s easy to see that all three games have big, blocky characters without art details which aren’t gameplay relevant. Joe in Metal Slug is permanently hunched with a big extended torso, so the player has a good idea of how they should move to dodge bullets. Caveman Warriors have characters which are drawn well, but are long and lanky. This means that players who want to dodge bullets will get hit in their legs or their flapping arms. Similarly, the sprites are so narrow that jumping on enemies to kill them is a proper pain. Enemy hitboxes are also not fantastic – it’s sometimes hard to tell if your melee attack will properly land.

Speaking of enemy design, far too often unintuitive design would lead to a sense of fake difficulty. The very first enemy caveman you see starts off by walking slowly back and forth, holding a club. Platformer logic dictates that the very first enemy should have an easy predictable movement pattern, like a Goomba from the Super Mario Bros. games, right? Well, hop into the line of sight of the enemy caveman and they will charge with triple the speed of their normal walk cycle, trying to hit you. Their club now also becomes a damage hitbox, and it’s raised up over their heads so jumping onto it will also hurt you. And, if via quick reflexes you somehow dodged this unpredictable attack, the caveman will drop his club and run in fear in the opposite direction – even faster than his charge, and still able to hurt you. And this is the very first enemy! Not every enemy is this bad, of course, but there are some which are worse. The second level introduces pterodactyls which swoop right to left off the screen, and then after a little while swoop back into the screen from behind you. This is not challenging or engaging enemy design – the only thing this promotes is tedium.

And it should be mentioned, Caveman Warriors has a real problem with difficulty. It wants to be reminiscent of hard arcade platformers like Metal Slug, but it does so in cheap ways – unavoidable damage from enemies with badly telegraphed movements, and damaging pits which enemies will gladly knock you into. There are checkpoints but even these are counterintuitive. Rather than appearing before a boss/miniboss or a particularly challenging segment, they tend to appear when the developers think the player needs a quick break from action. For example, if you die against the first boss, you’ll need to defeat a gauntlet of enemies before arriving at the boss again – and you’ll most likely arrive on half health. 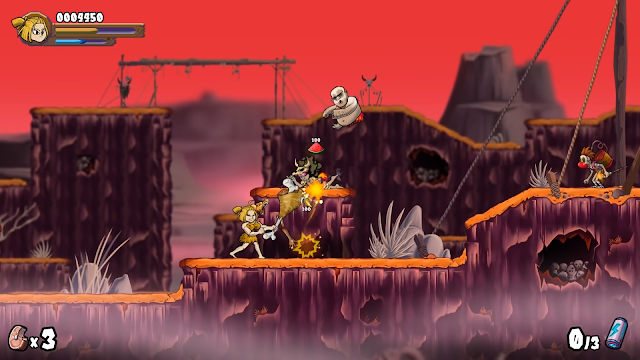 I did notice that the four player co-op made the experience far more palatable. Additional players encourage communication and remove the need to stop progress to switch to the correct character to advance. The difficult enemies are also dampened by the fact that you’ll have four characters attacking at once – you can arrange to have one player watch your front and one watching your back. Only one player needs to make it to the next checkpoint as well – doing so revives all dead characters, and there’s a big joy of expectation when you’re the last character alive, and everyone else is cheering you on until you reach the checkpoint and bring everyone back to life.

Caveman Warriors is a competent platformer weighed down by the problems of a game which wants to be Metal Slug, and Trine, and Joe & Mac, but hasn’t synthesised a unique mechanic or gameplay loop to set itself apart. Most of my complaints lie in that elusive zone of “game feel” and “flow” – the games Caveman Warriors claims inspiration from all have methods to keep the player engaged and in control so that they feel prepared for the challenge they’re about to experience. Caveman Warriors, however, has no sense of flow – it’s full of enemies with questionable attack patterns landing cheap hits in characters with long, jerky hitboxes, cheap deaths from bottomless pits and checkpoints which force you to repeat the easy bits before you get a chance to try the hard ones again.

It’s really not a good sign that I’ve been spending much of this review comparing Caveman Warriors unfavourably to games made over twenty years ago. I would be much kinder if JanduSoft had polished a new, interesting game mechanic and built around that core experience, but what the developer has done instead is take the defining mechanics of classic games and mash them together in such a way that doesn’t achieve that X-factor that people loved about those games back in the day.