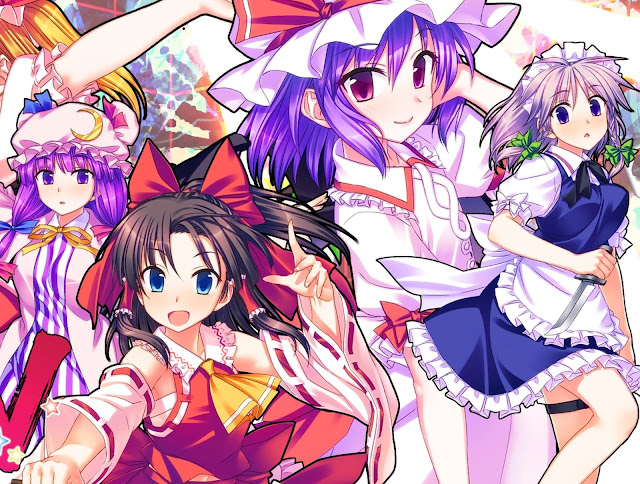 Touhou Kobuto V: Burst Battle is not a very good game, unfortunately. It’s a clumsy, clunky and amateurish production. That, of course, is part of its charm for the very small niche that would look at the screenshots and even think to give it a go. The entire Touhou IP and franchise comes from the dōjin soft corner of Japan’s games industry – effectively developers that work on games more as hobbies than as a commercial pursuit. Liberated of the constraints of commercial game development, that has led to some good times; roguelike Touhou Genso Wanderer was a solid experience on all levels, and Touhou Kobuto’s immediate predecessor, Genso Rondo: Bullet Ballet, absolutely delighted us. It was, in fact, one of our favourite games of the year. But Burst Battle is just not very good.

Bullet Ballet understood the limitations of its development team. It was a simple, but clean and elegant and used a perspective, gameplay engine, and aesthetic that could hide its budget and limited development resources. Just like Kobuto, it was a top-down one-on-one fighting game, but in playing it you were instead given the impression of a bullet hell more than anything else. If you were to take something like Geometry Wars, replace the characters with cute anime girls, and then replace the enemies for a combative one-on-one action, you’d have that particular game in a nutshell.

But Burst Battle had loftier ambitions than that. The team working on this game wanted to give players a behind the back, third-person perspective on the action, and that’s where its problems start. This is one horrifically ugly game, in-game, because building environments from that perspective is an incredibly resource-heavy way to do things. In the story mode, and whenever the 2D character art pops up, it’s gorgeous, and every bit up to par with any visual novel or anime-inspired JRPG that you might have played. But then you’ll get into a battle with someone, and the pieces will fall apart, and quickly. Environments and character models are very, very basic, and not unlike a PlayStation 2 game that’s been HD remastered for the PS4. That in itself isn’t the end of the world, but the design of these characters and environments is also completely uninspired. There’s one stage that is quite distinctive, because it’s got a silhouetted castle and sinister sky in the background, but for every other level I’m really struggling to remember anything about them. 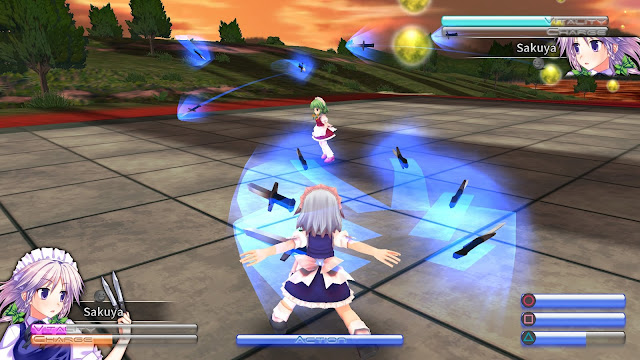 I’ve played enough of the Touhou games now that I have a sense of the major characters, even if I’m not familiar enough with them to be particularly enamoured to them. Kobuto doesn’t do them any favours with the basic character models and costumes, coupled with a distinct lack of personality as they fight. I get that there’s one girl that uses ice, and another that tosses daggers around, but ultimately all you’re doing is shooting coloured, glowing projectiles at one another until someone falls over. There’s also a real dearth of playable characters in the game, and while they all do fight differently to one another, it doesn’t take long for a sense of endless repetition to set in.

The best feature in the game is a story mode that offers a story that, silly and simple as it is, is also charming and fun. There’s unfortunately a lot of assumed knowledge built into the script, so people who haven’t played many (or any) of the Touhou games might feel a little lost at first, particularly the way the characters interact with one another based on their history, but the overarching narrative is clear enough for anyone.

Once a battle starts though, the clumsy approach to combat renders the good work that the story does to set the scene rather mute. Like any fighting game, your job in Kabuto is to reduce your opponent’s health to zero. In this one you’ll predominantly do that by attacking from a distance. Each character has multiple attacks mapped to three different attack buttons that range in strength, depending on how long the button is held for, and a lot of these attacks have the effect of filling the screen like the bullets in a bullet hell might. Using certain attacks, you can also build special “points” of energy towards a super attack that will wipe a lot of health off the opponent. 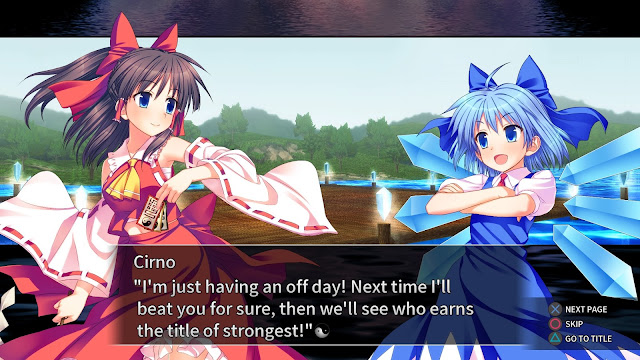 It’s just all so clunky in execution. Characters move jerkily around the arena, and the action is so sedate compared to what an actual bullet hell would offer. A third person game functions very differently to a top-down bullet hell, and it would have been impossible for the developers to implement the same kind of extreme, twitch-heavy action that drove Bullet Ballet. Kabuto doesn’t really compensate for the lack of pace with anything of substance, so instead we’re left with a screen that never has those same explosions of colour and raw energy as bullets fly in all directions. It’s more focused and direct, and less colourful and vibrant as a consequence.

Most irritatingly of all is the melee attacks, which, in theory can be executed whenever you come close to an opponent. In practice it doesn’t always work; an attack is difficult to line up in the first place, attacks that should have hit instead miss, the animation that comes from a melee attack can’t be interrupted and is lengthy enough to leave your character very vulnerable, and in getting so close to the opponent, the camera tends to go berserk, leaving you unable to see the enemy, let alone their counter attack if they’re wise enough to hit you in return from behind. If a melee attack hits it does a lot of damage and knocks your opponent down to give you a brief breather, but closing to the opponent and trying to execute one is simply too messy to bother with.

As a final nail in the proverbial coffin, being divorced of the energy and twitch spectacle of a proper bullet hell, Kabuto is incredibly shallow. Aside from learning how to avoid the enemy projectiles through a combination of jumps, dashes and blocks (though I found the block button too cumbersome and slow to bother with), the strategy of the game, such as it is, is about mashing out each character’s more effective attacks from each of the three attack buttons until you have built up that super meter and can really unleash a killing blow. There’s some skill involved in all that, yes, but oddly enough, despite its shallowness, that makes Kabuto also a pretty dull multiplayer experience; with so little obvious way to compensate for a lower skill level it’s hard for a player to remain interested in a match. The only way this game is ever going to be fun in multiplayer is if both players put in time to get themselves up to a roughly equal standard to one another, and the small niche that will love this game will struggle to find someone else passionate about it, I fear. 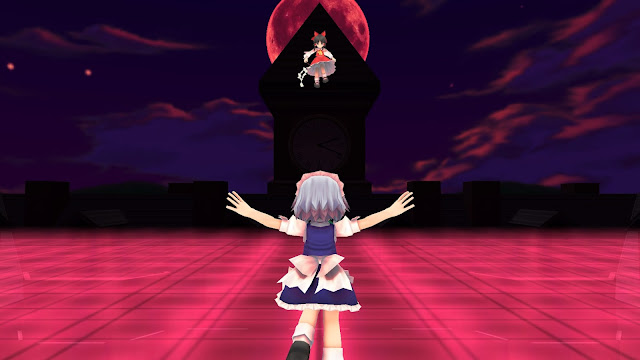 Touhou Kobuto V: Burst Battle is ambitious. This is a development team as indie as indie comes taking a demanding gameplay perspective and trying to do something demanding with it; create a fast, free-flowing, hardcore action game. Sadly it does miss the mark on this one. There’s skill involved in getting good at Kobuto, however, clumsy, limited mechanics, and a general lack of variety, presentational standards, or energy and excitement really let it down. I would have taken a simple, direct sequel to Bullet Ballet instead.