I’ve finally got around to playing the first installment of Summer Lesson, which was given English subtitles for a release in the English-speaking Asian market. So if you can access the Hong Kong PlayStation Network (thank the mercies for region-free) you can play it on any PS4 in the world.

I’ve been simply too busy to actually get around to making the import. However, while in Japan this year I went to Namco Bandai’s VR arcade (yes, the one that has the VR Mario Kart) and they had demos set up to show off the first two (of three) Summer Lessons. So I sat down and met Hikari Miyamoto for the first time. After finishing the demo I know I needed to make the time to play the full game when I got back home.

It wasn’t the game that I expected. In fact, it was far more delightful.

Here’s the thing about Summer Lesson; it’s a game that various (and many) outlets have written up as being both pervy and creepy since it was unveiled as one of the first PlayStation VR games in development. But it’s neither of these things on any substantial level, and it was clearly never the intention of Bandai Namco to make it about these things. It won’t be the first game that has been unreasonably judged based on concept, assumption, and out of context, but it’s one that even I made assumptions about (because I thought it would be more fanservicey than it was) only to be surprised and delighted by the maturity and subtlety of what I ended up experiencing. 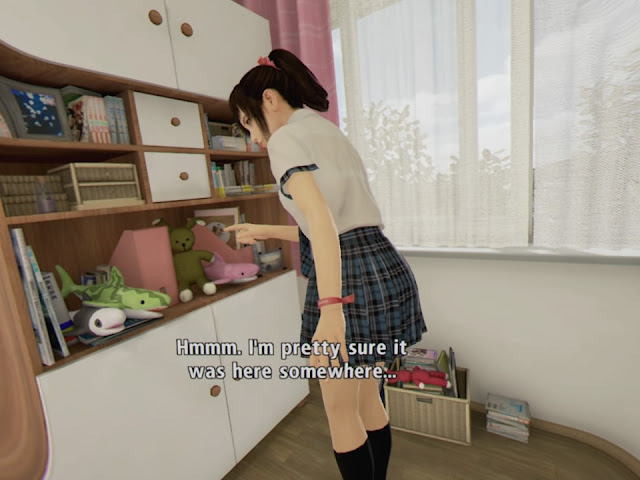 In Summer Lesson, you play as a tutor, whose job it is to take an under performing student (who just happens to be a girl), Hikari Miyamoto, through an intensive seven-day study program in the hope that she’ll actually get a good result in her upcoming exams. Now that is leaving the cramming a bit late there, but I digress. This is a fantasy game and you really can take a failure of a student and make her an elite performer over the course of a week in this fantasy world. So, over the course of the week you need to set the study program for Hikari, whether that be to take a day to exercise (fitness is good for the brain) study logic, read books, and so on, with each activity helping to boost her statistics in a range of different areas. Boost enough scores, and Hikari will do well in her exam.

At the same time, you need to keep Hikari motivated and interested in study, and this means you need to build a relationship with her so she enjoys learning under your tutelage. This involves having conversations with her about topics that interest her. Contrary to what those other reports on the game might suggest, the relationship never goes beyond tutor and student, and is never more than a warm friendship between student and tutor, and this is important, because Summer Lesson is not about enjoying Hikari. It’s about getting to know her. That’s an entirely different tone.

For the most part, the game does a superb job in establishing that sense of communication and relationship between tutor and student. Hikari is a sweet, lovely girl (because it would be pointless if she was not), and it’s truly incredible just how lifelike she appears through the VR lens. Placing you virtually in the centre of her room (or at a nearby shrine, where any outdoor scenes are set), it’s the small details in the way Hikari moves that makes her very lifelike to witness. Unfortunately this is something that doesn’t show up well outside of the VR experience, but the slight hunch when she sits forward in her chair, waiting for you to say something to her, or the way she leans over your shoulder to show you something on her mobile phone, shows the most minute eye for lifelike details in the behaviour of a person. Hikari also appears very “solid,” and moves around a 3D space in a completely believable fashion, and as a result the entire setting is completely believable, even if your character is permanently stationary and interaction is limited to where you look, and the occasional motion control mini-game. I can understand that some people might have an uncanny valley reaction in witnessing all this, but again, it’s neither pervy nor creepy. It’s just a little too real to sit comfortably with people who haven’t yet embraced the idea of digital people. 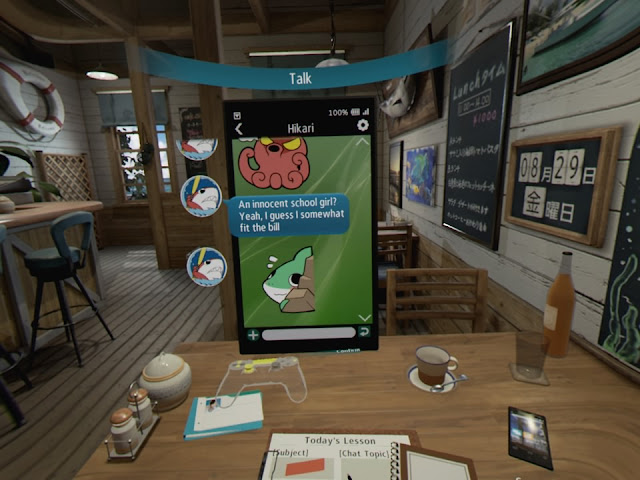 The “gameplay” itself, such that it is, plays out like a person management simulator, which are popular in Japan, but not seen that often elsewhere. As mentioned, each training course that you set Hikari will develop various statistics, and as you set those training courses they’ll become more effective. These kinds of mechanics are popular in idol manager games through to dating games like Love Plus, and simple as they are, they work in getting you to focus on what’s going on. Each seven-day “playthrough” of Summer Lesson lasts less than an hour, but some progress carries from one playthrough to the next, and if you want to get Hikari to really nail her exams, you’ll need to replay the game quite a few times, getting to know her better each time, of course.

The other major feature of Summer Lesson is the season it’s set. Summer has a very unique aesthetic and taps into very specific memories for Japanese people, and it’s a nostalgic and wistful season for that. All Japanese people remember studying hard for exams in the stifling, humid, brutal heat of the Japanese summer, taking relief when a gentle breeze comes through the window, and listening to the loud and endless droning of the cicadas chirping outside. And then there’s the reward of going to watch fireworks at a summer festival for their hard studying, of dressing up in yukata and enjoying the season with friends. Summer Lesson taps into all of that through its warm aesthetics and gentle music, and the scene it sets really helps to place players into something that, for the Japanese demographic, will be instantly (and pleasantly) familiar.

And that’s also why it makes sense that the game would be about a schoolgirl. Summer is a season that, to the Japanese, is a warm reminder of youth and the relative lack of responsibilities and freedom that they had then. A time where study, as dull as it could be, was still infinitely preferable to the 18 hour/day, six-day per week working weeks that many Japanese people find themselves trapped in as adults. It’s also why the role of a tutor makes sense. In aiming to tap into this kind of innocent nostalgia, Bandai Namco needed a relationship dynamic that could be presented as intimate enough that you and the girl would get to know each other well, and spend every day together, without the threat of romance hanging over the proceedings like the Sword of Damocles. A teacher-student relationship that pretends that an abuse of the relationship between a teachers and students would never happen is an oddly naive, but sweet, direction to take. 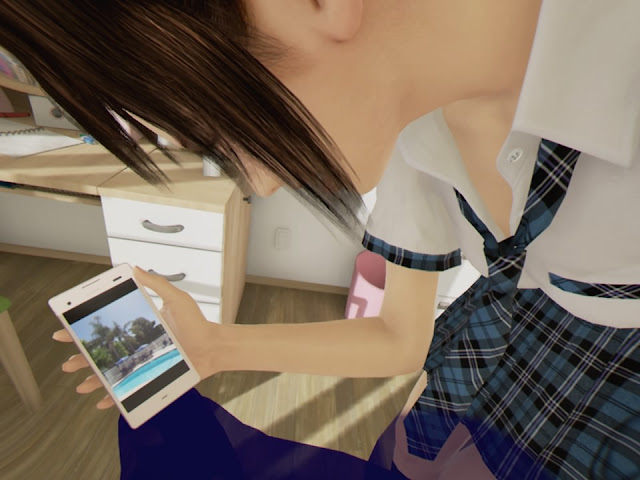 There are a couple of moments that push past the innocence that dominates the rest of the game, though it’s more playful nonsense than outright fanservice. Players have access to “bonus scene” items that they can use to trigger a special interaction with Hikari. These range from feeding one another cake (yeah, pretty sure tutors don’t actually do that), to going to the fireworks festival together, or running into Hikari working in a cafe dressed in a maid costume. These threaten to undo the good work the game otherwise does to set up an innocent relationship, but they’re never taken beyond a momentary silliness, so they never tip over into that particular abyss. Furthermore, the game isn’t lecherous. There’s no bikini or underwear costumes to unlock, for example. You can earn alternative costumes for Hikari, but they’re always what you would expect a normal girl would actually wear around the home. Equally importantly, what Hikari’s got on underneath her skirt is none of your business. If you do try and do the pervy thing and take a look up Hikari’s skirt, the screen will black out and you’ll be told to stop being so hentai. Shame on you.

Summer Lesson is about getting to know – and love – a character in a strictly non-romantic way. It’s a game purely about one character, and it has done such a good job in building a character that you can fall in love with – again, in a strictly non-romantic way – that it really deserves to be held up as a triumph of how characterisation can – and should – work in this brave new world of VR. When you’re placed in a much more intimate setting and the character appears to be so much more tangible and real, it actually becomes more difficult to connect character to player, because the smallest of unrealistic details are going to be that much more noticeable. Put on the VR goggles, and if your game is going to be about interacting with characters, you’re going to have to make sure the characters look and behave real. Summer Lesson does that.

Bandai Namco has been explicitly clear that the series will never get a full western release, citing “cultural differences” as the reason. The “cultural differences” that the company is referring to is not that the Japanese are more comfortable with pervy games than the west. It’s that the west would see this as a pervy game at all. Yes, sure there are elements of Summer Lesson that play on the very edges of sexualisation, but that’s done more as a tongue-in-cheek bit of self-mocking humour than anything else. What Summer Lesson really is is a sweet little narrative game that demonstrates how effective VR technology can be in deepening the connection that players have to characters. To be frank, if you play this game and find it sexualised, then my concern is with you, since it would seem to be impossible for you to look at a teenaged girl in a normal, everyday context and not start thinking of “sexualisation.” But again, I digress. 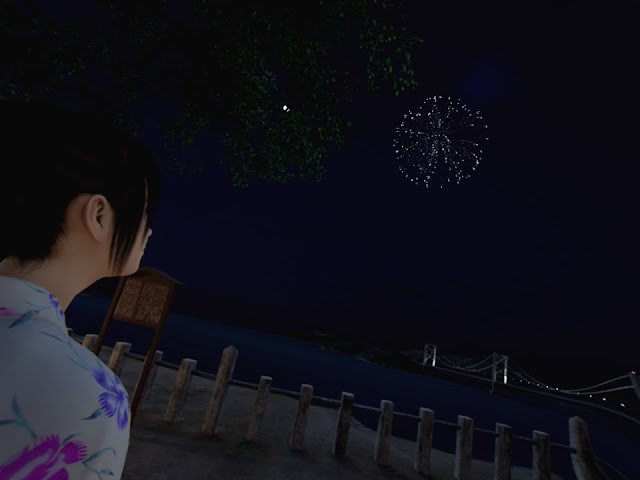 Sadly, there are two more Summer Lessons out there, one starring a blonde girl, Alison Snow, and she apparently loves to play guitar, and the other, just recently announced, stars Chisato Shinjo, who seems to be some kind of rich girl, living in a mansion. It’s sad because the promise of this franchise exploring different personalities is an exciting idea, but there’s no indication on whether these two will even be released in English for the Asian market. I hope so. Hikari Miyamoto has so delighted me that I do want to see what other personalities Bandai Namco can come up with.