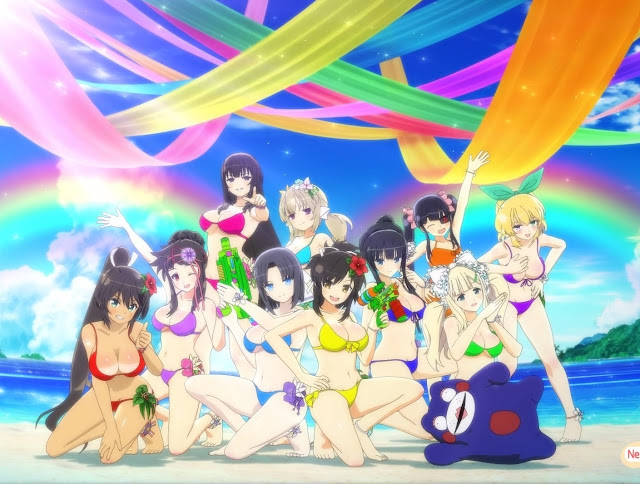 From the outside the Senran Kagura series can seem like it’s nothing more than ample fan service with its almost entire cast of busty ninjas. And there’s plenty of fanservice in this one too, so that perception will be going nowhere. Peach Beach Splash is the latest in this series and while it doesn’t hold back on the fan service there’s a quality to the gameplay and the story that a lot of AAA titles nowadays would be hard pressed to match.

As stated there’s a lot, and I mean a lot, of fan service. I mean we are talking about a beach, swimsuits and water guns. There was only one way this game was ever going. But underneath that surface is a game that’s worthy. I know myself that until I jumped into Shinovi Versus I never would have thought that there was more to this series than what we see on the surface, but I was a convert once I realised there was a depth to the mayhem and that the narrative actually wasn’t bad – everyone had a reason for fighting and the supporting storylines to tell the tales! It was actually worth playing for the “articles”! Peach Beach Splash, follows this trend with both addictive fast paced gameplay as well as multiple stories from the different groups and the women that belong to each.

For those just coming in, Senran Kagura follows the lives of female ninjas from different schools of study and of thought. Some get along in friendly rivalry and some just can’t stand one another so each new tournament, regardless of what form it takes, is just another excuse to prove that they are better shinobi compared to the competition. Peach Beach Splash becomes this latest excuse as they are all invited to a paradise island in the middle of winter turned summer in order to calm the scorching spirits making it warm. With the hosts adding in that the winners would be rewarded with anything they wished, everyone is given the gear in order to wage a watery war, and the battle royale begins. 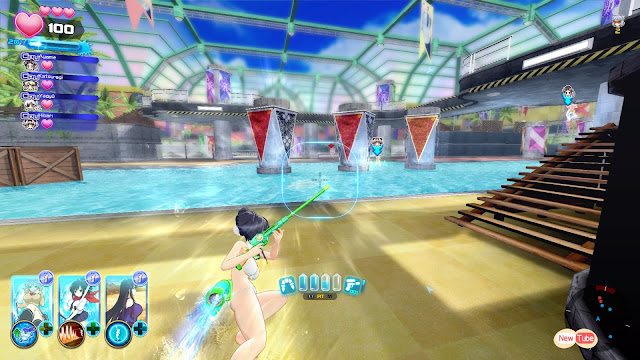 Peach Beach Splash has two main modes. Players can either go into single player and various campaigned stories or into multiplayer for some 3v3 or 5v5 action against others online in ranked or unranked matches. You can jump into the multiplayer straight away, but I really recommend the single player first, not only to learn the ropes, pick up new gear and level up, but simply because both the main and the sub-campaigns are worth doing.

Each group is given a ten stage campaign that has plenty of storytelling before and after every match. So even with quick, fast and enjoyable gameplay, the stories are not simply an afterthought. If anything, the gameplay between the events is the filler. The actual gameplay for “gameplay’s sake” is separated off into another single player mode in a form of tournament that simply throws stage after stage in increasing difficulty and awards until the tournament cup is obtained.

While at first glance the gameplay can seem a bit simple there’s a depth to it all through the ability to level up the characters, their weapons and the skill cards that each can equip in the form of personalised decks to use on the field. These cards grant skills from anything like shockwave blasts to barriers or even ripping open other character’s barrier. The more that a card, a character or a weapon is leveled the more powerful it obviously becomes however in order to do so, you have to start winning first. 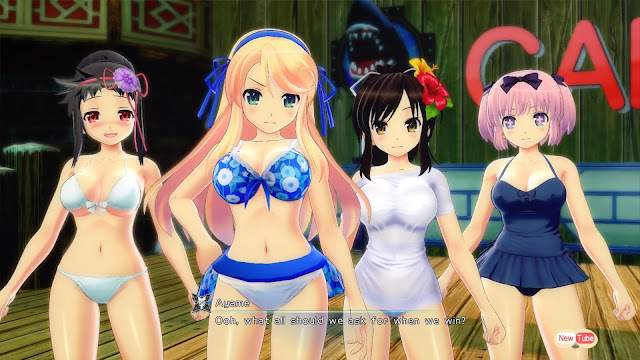 Leveling up isn’t quite done in the traditional sense. While you’ll need experience in order to level anyone or anything up, this experience comes from the “extra cards” that you obtain while opening up trading packs that are granted at the end of a stage. As you win tougher and tougher battles you receive packs of increasing value which hold more than just the basic common cards.

After you’ve obtain a card once, any duplicate is thrown into a reservoir of copies that can be broken down into experience to level up whatever you need. This means the more you play, the more you can upgrade whoever or whatever you need which makes the gameplay only tournament mode a great place to start before hitting multiplayer or the secondary stories which are a bit tougher than the standard campaigns.

With the support system in place, the fast paced gameplay is only made better. The Senran Kagura series normally plays out fast and hard as the cast are all well trained ninjas and Peach Beach Splash is no exception. Taking the best ideas from a tournament arena shooter, each character has different styled weapons from double pistols to sniper rifles, shotguns, rocket launchers and miniguns. The only difference is that each and every one of these weapons is designed as a watergun and requires pumping in order to refill it once the water reservoir has been emptied. Taking things one step further past all the skill cards is that these reservoirs can also be used to power jetpacks and dash across the maps. 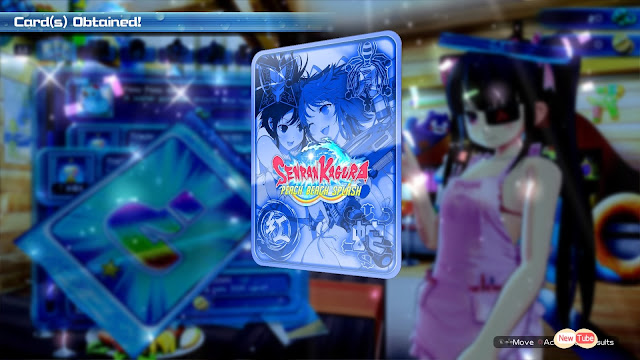 The maps themselves are all designed around these elements with plenty of spots in order for characters to snipe at one another as well as to hide by either jetpacking up to another level or by dashing down under cover. Each style of watergun has their own range making the use of the levels crucial in higher difficulty matches or against other players if you don’t want to be easily taken out. Giving more options that simply fighting water with water, each character has the limited use of their physical weapons in order to smack those that have come too close to them on the field of battle. Add in the skills from the trading cards and there’s more than one way to take out your opponents!

Between matches, there’s a shop that you can use the spoils from to purchase accessories and other outfits that can be equipped from a dressing room. This basically means that the standard “regulation” white one piece or bikinis are out and whatever you want your characters to wear is in. Tank tops and camo pants, different styled swimsuits, t-shirts that get wet and see through, and so on. As with all Senran Kagura games there’s just so much to purchase and customise your girls with.

Senran Kagura: Peach Beach Splash was a blast. Quick paced arena combat supported by a well designed card based system and multiple storylines to follow, this has to have been my favorite entry yet and with the quality online competition modes online modes there’s more than enough replayability to keep going for quite some time.