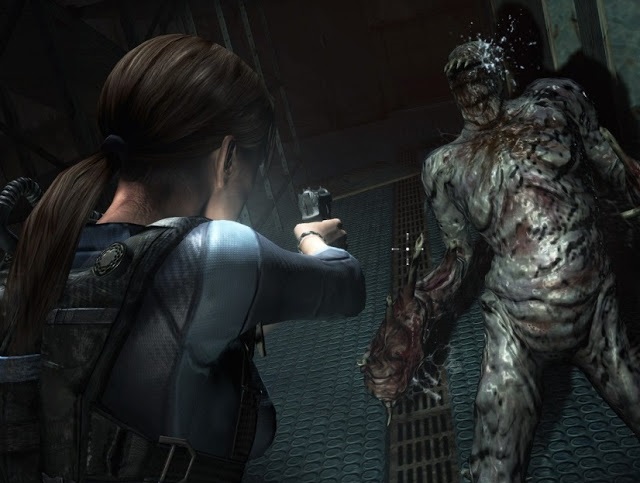 With Resident Evil 7: Biohazard taking the Resident Evil franchise into a bold and controversial new direction, it was a curious decision for Capcom to re-release Resident Evil: Revelations onto current-gen consoles. After all, it’s a port of a port of a 5-year old Nintendo 3DS game. But then, it’s a game that has been well-received on everything it’s been out on thus far, so it was an easy way for Capcom to give console players a solid Resident Evil experience.

Related reading: Our review of the sequel, Resident Evil Revelations 2.

Despite being a fan of the Resident Evil series overall (yes, including 6), I never did get around to playing Revelations. I suppose I figured that since it was a 3DS game, it couldn’t have been too creepy or action-packed. Now that I have had the chance to play it on the Xbox One, I have fond memories of reuniting myself with Chris and Jill in a solid game that has a few issues with the aging process.

Set between Resident Evil 4 and 5, Chris and Jill, as part of the BSAA (Bioterrorism Security Assessment Alliance) are investigating the terrorist organisation called Il Veltro after launching a bioterrorist attack on Terragrigia, a self-sustaining island city with a hard to pronounce name. In response to the attack, the city gets obliterated by a satellite and completely decimates any survivors as well as the B.O.Ws that have overrun the city. 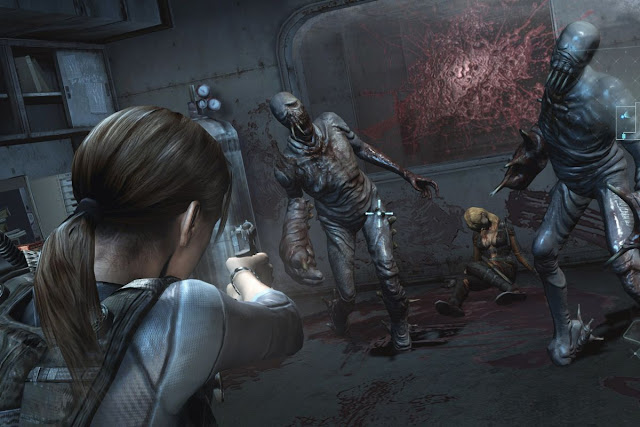 As a game that was made for the 3DS, then ported in HD to the Xbox 360 and PlayStation 3, and now on the Xbox One and PlayStation 4, Resident Evil: Revelations hasn’t aged particularly well. It’s the characters that let it down. While they were rendered as “realistically” as possible for the technology back in the day, they haven’t aged very well, and on the modern consoles they’re no longer up to snuff. This is nothing new for Resident Evil. I remember when the original Resident Evil came out on the PlayStation 1 fondly, it looked ultra-realistic for its time, and now it looks like an ugly mess. These games are completely playable, sure, but they need to be immersive to be atmospheric, and immersion is difficult when the characters look as primitive as they do here.

One thing that I do love about Revelations is the way it gives you a large “building” to explore, much like the original game. Rather than a mansion, as it was in that game, Revelations takes place on a large cruise ship in the middle of the ocean. Exploring this kind of interconnecting environment, bit by bit, is vintage Resident Evil, and as annoying as it is to try and track down keys for locked doors, the consistency in environment when moving around helps build the narrative by keeping it localised. Too many later Resident Evil games take place over much larger areas, at the cost of the area itself being a “character,” but this game’s ship, as the train and mansion in Resident Evil 0 and 1, respectively, is its own character in the game.

The aquatic theme allows for a new variation on the types of monsters that appear in the game. Rather than standard zombies, we now have these blob like humanoid creatures that can crawl through vents, through doorways and out from lockers. I was constantly kept on my toes throughout the whole game. Some enemies are actually just blobs with mouths while some super vicious looking fish are also part of the horrors within. 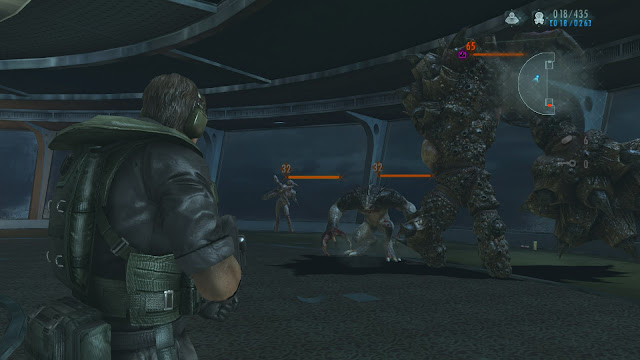 In terms of gameplay, Resident Evil Revelations plays mostly like Resident Evil 4 and 5, with an over the shoulder perspective, and the characters are mobile when holding the gun up, as with action games. In earlier resident evil games, having the gun up meant your character was rooted on the spot, so this alternative is an absolute Godsend in terms of playability. Despite not looking as good as the some of the games in the series, the actual play or Revelations does feel superior.

Raid Mode is included in the port, and all it really boils down to is an arcade mode involving different sections of the map. It can be done solo or in online multiplayer, and the aim is to run through a map as fast as possible while dealing as much damage to enemies along the way. At the end, points are awarded for speed and damage. It’s fun in short bursts, but the online community for the game is limited already, and unless you’ve got friends to play with online you’ll be running solo. Even if you can get friends together, though, it’s not going to keep you playing over the long term, so most people will likely find their time spent in the game’s main story mode.

With Resident Evil 7: Biohazard suggesting that the main entry games are again pivoting in a new direction, Capcom’s re-rerelease of Revelations may be its way of showing fans that it’s also committed to the “classic” Resident Evil formula with this side series. While the visuals have aged considerably in the short timeframe, the classic Resident Evil gameplay and feel is still there, complete with a bonkers B-grade storyline. I’d dare say that most Resident Evil fans have possibly found a way to have played this already, and there is really no incentive to come back for another round.