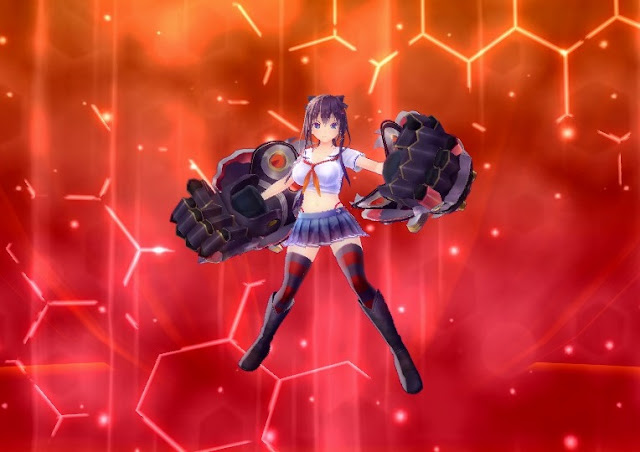 If you’ve ever played a Marvelous game before, then it’s going to be obvious how Valkyrie Drive –Bhikkuni– plays out. The closest point of comparison is likely to be the Senran Kagura games, which have received a rather mixed reception at the hands of critics and players alike. Unsurprisingly, Valkyrie Drive has been generating the same sort of response as its sister series as of late; its port from the commercially flagging Vita to the more popular PC explains the number of hot takes that have come out recently about games with bikinis. I can’t comment on the substance of those opinions because to do so would be an objectively nightmarish experience, but for all the scandalous clothing and the sex jokes, the game handles better than you’d think.

Related reading: Valkyrie Drive’s stablemate, Senran Kagura, is also well worth a look. Matt’s review of one of the recent games.

For a little bit of background, it may well be important to note that the premise of –Bhikkuni– is by no means new. Valkyrie Drive is a cross-platform series that debuted a couple of years ago to the tune of an anime (Mermaid) and its narrative has been consistent over the various products associated with it. There’s been the anime, manga, the game, and more recently a mobile app that’s part card battler and social simulator. Accordingly, the story is relatively simple to explain and conceptualise; it’s got to be consistent across the mediums, after all.

The Armed Virus is an affliction affecting what seems to be random women in Japan, and once someone’s status as a carrier is confirmed, they’re shipped off to a place to be quarantined and cured. What makes this virus unique (and serves as the central reason for the ample assets displayed in the game), is the fact that the Armed Virus essentially turns some of its sufferers into weapons. Imagine the core gameplay of Senran Kagura’s brawling games but with women using other women as their weapons of choice. It doesn’t sound too unique, until you learn that the only way you can turn another character into a weapon or be turned into a weapon yourself is through extended intimate physical contact. 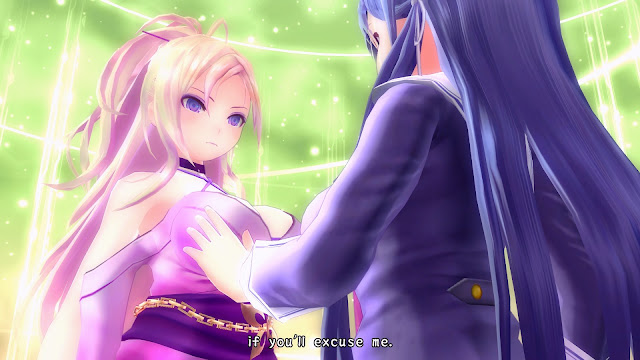 The stakes may seem a little higher in the narrative than usual for a Marvelous game, but this isn’t the kind of game that you play if you’re looking for a particularly deep storyline. The complications end where the meat of the plot begins: that is, the introduction and backstory are really the only defining differences between Senran Kagura and Valkyrie Drive. Once you discover the two classes of characters – Extars and Liberators – your job description gets narrowed down to one goal, learning more about your virus by beating up other girls and mechs. You can accomplish this goal by playing one of seven characters throughout the game, and it handles like a smoother, sexier version of Senran Kagura Shinovi Versus.

While Shinovi Versus struggled to adapt to mouse and keyboard controls properly when it came to its PC port, Valkyrie Drive has had no such issues and it has a reasonably intuitive approach to combat navigation. I experienced a few hiccups at first in terms of coming to grips with moving the camera to get better angles on the fights, but that was mostly circumvented over time with practice and perseverance.

When it comes to said fights, Valkyrie Drive shines when it comes to delivering a visually interesting and exciting performance. Scooting around the map effortlessly feels makes you feel like you’re in one of the newer Musou titles, and racking up impressive chain combos while brawling is buttery-smooth so long as you can point yourself in the right direction for long enough. You can take to your foes with swords, shoot them with bows, throw them into the ground or chuck a bunch up in the air with ease. It should also go without saying that since this is a Marvelous game, taking and dealing damage isn’t represented by anything as gory as blood and bruises – if you get smacked, be prepared to lose your shirt. The clothes of both your enemies and yourself disintegrate over time as you exchange blows on the battlefield, and if you’re particularly skilled at using powered-up moves that drain a resource called Drive, you can get up close and personal to watch those clothes disintegrate before your eyes. 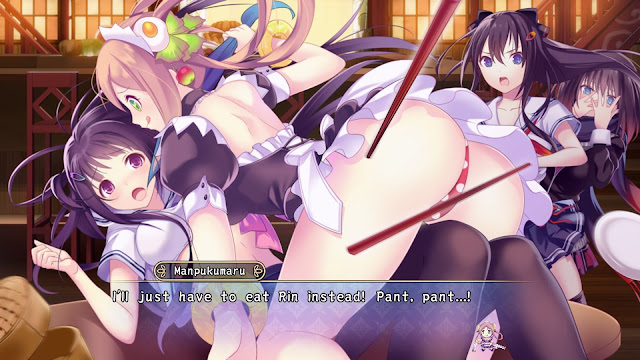 Land enough souped up hits on a girl and you can take her down from conservatively-dressed to strategically nude in a matter of seconds. The only time this doesn’t work is when you’re engaging in various boss fights against giant robots (yes, you read that correctly), but keep at it enough and those fights too end up having their own rewards. While the graphics in all fights and their corresponding cutscenes were snappy and colourful overall, there were also some unfortunate graphical glitches that had weapons obscuring the more impressive assets being displayed. When you consider that the girls are the main draw of the whole affair, that sort of thing can be hard to ignore.

Of course, another key element of Valkyrie Drive that isn’t the combat is, understandably, the dress-up element. While the game has generally made some effort in terms of the combat and its premise to distinguish itself from Senran Kagura, it’s adopted a more “if it isn’t broken, don’t fix it” to costuming and customisation instead. Both games have a fundamentally similar interface, right down to the menu text and the background textures. It’s a little fun on the side, mainly because it’s probably the only meaningful way for you to spend the money earned in-game – buying costumes to make your girls look even better.

While the gear doesn’t actually impact on your fighting capabilities at all, it’s, well, nice to look at. There’s a surprising amount of variety when it comes to the underwear and the accessories on display, and you’re incentivised to put a little elbow grease into this because of the mini-game that you unlock as a result. If you’ve ever wanted to give characters in your favourite game a massage in return for all their hard work on the field, then this is probably the part of the game that will be the most compelling to you. You get to unlock certain cosmetic items after a couple of gos, but that’s probably a secondary consideration compared to the fact that your hands get seven minutes of heaven with the woman of your choice. 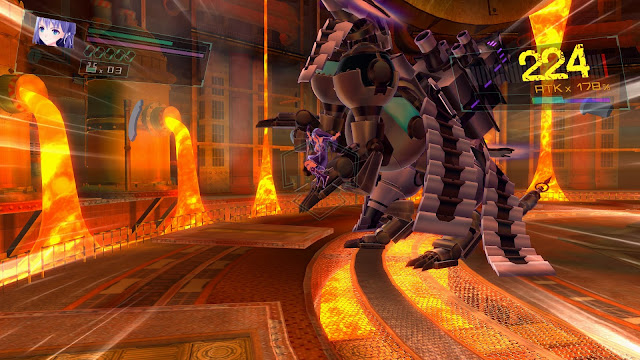 Valkyrie Drive is the sort of game that, as described, pushes buttons. It’s got all the ramped-up sexualisation that works its way into most of Kenichiro Takaki’s games, and it’s also got the sort of gameplay that makes it easy to pick up without too much effort. However, that’s not to say that the game is merely window-dressing. It’s a more than serviceable brawler with the sort of plot that provides the over the top satire that we’re used to seeing in combination with the rather impressive assets of the women in Marvelous’ stable. Valkyrie Drive is the sort of game that you’ll either love or loathe, and that’s going to come as no surprise to those of us who fall into the category of the former. The important thing about this game is that despite what anyone has to say about the various stages of nudity, it’s perfectly playable and delivers exactly what it sets out to – boobs, butt, and brawling.