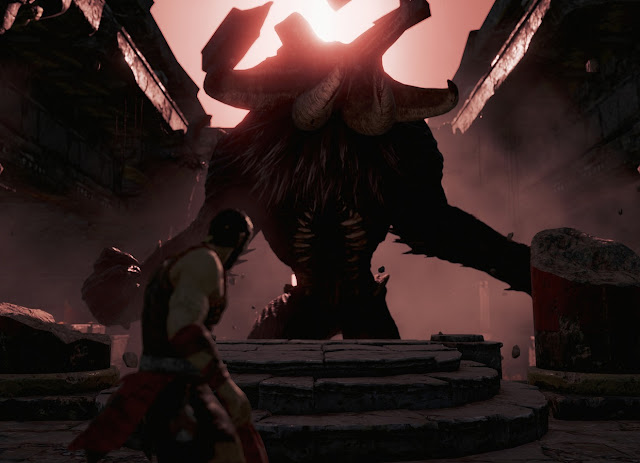 Game developers are still exploring what is possible with with the PlayStation VR technology. It’s going to take some time. This technology is not a simple upgrade to existing gaming hardware; it requires a genuine re-think in how players interact in games, the relationship between the on-screen avatar and the player and, really, how games are designed from the ground up.

For the most part, developers working with VR have stuck to games played out in first person, and experiences in which players have limited spatial movement – or at least don’t need to interact with a controller to move. Relatively few games have tried to give players a more traditional third person view on the action. Theseus is one of the few attempts at the latter that I’ve seen. And though it’s more sedate than most modern third person action games, I really like the ideas that this one expresses.

The game is steeped in Greek mythology. You play as a hunky dude who wakes up in the middle of a ruin for reasons that we’re not privy to. A small light guides him to an ethereal body, Ariadne, who pleads with him to enter a maze of antiquity, survive the hostile forces within and, ultimately defeat the beastly minotaur that stalks its halls.

Well this is quite intense in VR #PS4share https://t.co/TcGJfPSHE3 pic.twitter.com/USZfwWt6V8

I’m going to assume that most people know the story of the minotaur, and indeed who Theseus and Ariadne are, but if not, here’s the crib notes version: the maze that the minotaur haunts was a place of evil, where sacrifices were sent and consumed by the minotaur as reparations to Poseidon (occasionally Athena is mentioned instead, but the stories I grew up with listed it as Poseidon, so I envision it that way). Ariadne was put in charge of the maze by her father, Minos, the king of Crete. One year, the sacrifices sent included Theseus, the son of the king of Athens (where the sacrifices were drawn from) who had volunteered as a sacrifice as a way to get the opportunity to kill the minotaur.

Ariadne fell in love with Theseus on sight, and provided him with a ball of twine (to help him navigate the maze, because apparently the old “touch the left hand wall of the maze and follow it to the exit trick hadn’t been invented yet), and a sword (for obvious reasons). Theseus accomplished his goal and the two married before, in true Greek tragedy style, Ariadne was soon after killed.

Theseus – the game – is an interpretation of that base myth that takes significant liberties with the story in order to make it fit the video game format, but the same basic premises remain – Ariadne is a guiding force, the minotaur itself is terrifying in its presence, and the maze is a decrepit and claustrophobic menace in its own right. This set-up is perfect for VR, too, as the winding, twisting ruins limits the characters ability to go “off track,” and the inky thick blackness can easily build atmosphere when it completely envelops you in 360 degrees. Coming across the minotaur is a truly intimidating experience, too, because this thing is huge, powerful, and terrifying. 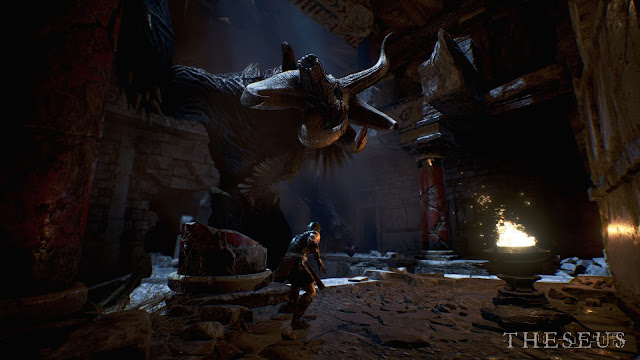 What the game doesn’t do so well is build in the moral lecture that was the purpose of the story. As with many Greek myths, the heroes (think also Heracles and Perseus), Theseus was fighting a symbol of the slavish adherence to religious orthodoxy that the minotaur represented. The real evil wasn’t the beast itself, but rather in the act of demanding sacrifices to appease a god. Both Ariadne and Theseus were the heroes of the story, due to their equal desire to do something to stop that particular evil – though Ariadne did only do it to get into Theseus’ pants, and, as I noted earlier, she ends up dead, not without purpose.

For the purposes of the game, however, that narrative is boiled right down to a classic tale of man vs. mythological beast. We’re clearly still not quite at the point where VR is ready to be used in a storytelling context. I felt that omission more in Theseus than most other games, because the atmosphere and concept is rich enough that I was constantly left looking for more depth and purpose to everything that was going on. As it was, I was left with a really good looking and interesting action adventure game, but Theseus could have been much more.

This is not God of War, and that needs to be made clear from the outset, because it often looks like it wants to be. The action elements are far more subdued, and there’s a greater focus on other gameplay gimmicks, such as being stealthy, or keeping monsters at bay by waving a torch in their faces. It is the only way a game like this could work in VR; if this was Kratos whirling around like a dervish the potential would have been there for the action to become sickening. This way, you’re able to concentrate on what you need to without your eyes having to filter through too much information from all directions. 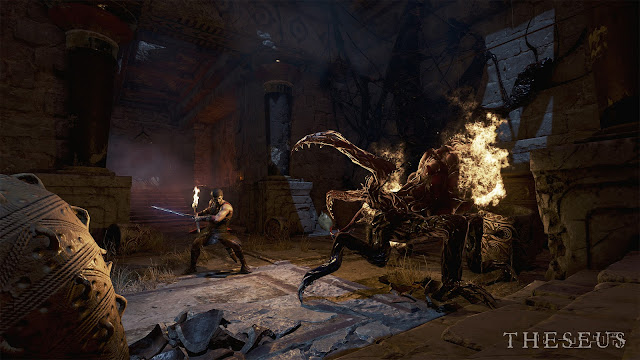 The developers did work out a nice solution to allow the game to play out in third person; you effectively play as the camera in an old Resident Evil game. Every time Theseus enters a new space, the camera – you – will “jump” to a vantage point where you can see all the action in that area, and from there you can navigate Theseus towards the exit. You’re able to tilt your head around to get a complete look at the room, but the “camera” itself is stationary until Theseus moves to the next room, and the “camera” jumps to the next point. There’s also the occasional moment where the camera follows Theseus from behind the back, as he ventures down a darkened tunnel, for example. These moments are the most atmospheric, though limited in the gameplay range that they allow. I didn’t expect the camera to be as effective as it has ended up being, is what I’m saying here, but of the limited range of VR games that have tried to do a third person perspective, I’ve got to say this is the best I’ve encountered.

There are two endings to Theseus, though either way the game itself isn’t that long. It does tell the story it wanted to, though, and does so in a comprehensive enough way that I wasn’t left wondering. It’s a crafty little proof-of-concept and experiment in making VR work in the context of a third person adventure experience. It’s a little limited for what I ultimately want VR to deliver, but it’s worthwhile nonetheless.