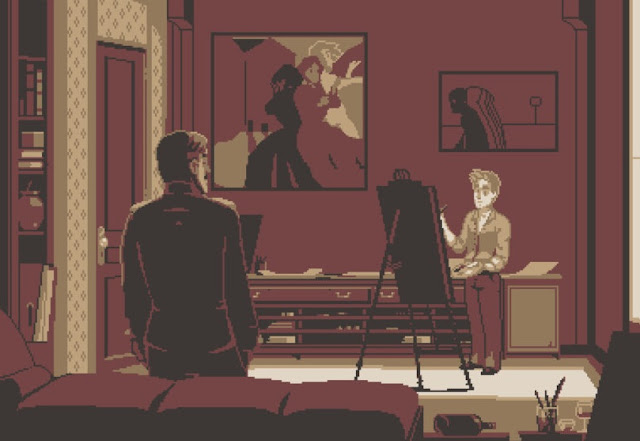 Dear reader, let me tell you about what it is like to be a creative or a passionate person towards an idea. Often the almost unreachable idea scars the pursuer until they can achieve the inspiration to craft the destination, a completed work of art or a visionary action while often the result is paved with sacrifices and struggles. The goal will always be hidden away by sleepless nights and anxiety to be accepted by peers leading to a search for something missing, that key decision which transforms an idea into an impactful piece.

Just like how this introduction is written, when it comes to The Lion’s Song I have found myself with the same head scratching pain many creatives find themselves battling to get out of. A deep desire to represent oneself in their work as much as creating something that would be accepted by others. Often retreating on a concept countless of times until the interpretation seems right.

The Lions Song is a story-based point and click which frames those struggles and personal battles so well around three protagonists from the 20th Century. The strongest aspect of the game is the stories and lives of these characters which are insightful, inspirationally crafted educational pieces. Setting the scene nicely, the first episode of The Lions Song puts players in the mind of Wilma Dörfl, a female violinist with a similar legacy to real life 19th Century Wilma Neruda, who battled gender normalities of the time to pursue a passion in what was considered a male’s world. The Wilma in The Lion’s Song grew up in Austria not far from the Czech border as a poor farmer’s daughter with a desire to support her family through playing the violin, only to be “discovered” by her later mentor Arthur Caban.

This lead her to study in Vienna, learning musical theory, only to be pushed into the deep end after a successful debut composition. Tasked to write another, Wilma is sent away to a cabin so she can focus on the music, and so begins the start of the most beautifully crafted exposition on how the mind can be drained by the stress of any creative outlet. Players find themselves looking for ways to be inspired in an otherwise creatively bankrupt cabin, with the goal of creating the perfect musical composition, however this is framed by nights of dream sequences in which she worries about how her work will be perceived.

Within these dark dreams focusing on Wilma’s anxieties is the light of the inspiration she finds to complete her composition. I found myself focusing on a strange man named Leos who is fixated on the invention of the telephone, a beacon to inspire Wilma and allow her to drain out the various sounds of the cabin. This episode sets up the tone of the series perfectly by drawing the player into the universe, along with the simple yet effective gameplay mechanics designed around the game’s core themes. In this story players identify objects for inspiration and sounds to be inspired or ignore.

Looking beyond that opening chapter, and Wilma, the story of the characters in The Lion’s Song isn’t just the trials and tribulations of been a creative or the passion behind an idea, it is also the personal struggles they face to achieve them. No chapter does this more than the third chapter that introduces a protagonist (Emma) who comes up with the cunning idea to cross dress to enter an exclusive gentlemen’s math club after been rejected from the group for been a woman. 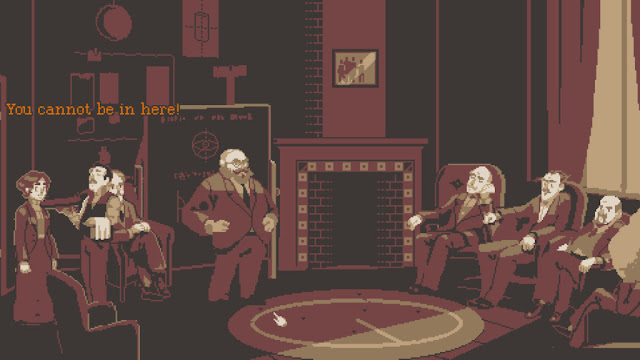 The life of Emma is a harsh one filled with a conflicting personality due to the harsh realities of mathematical research at the time. A librarian by day and at night a mathematical mastermind pursuing her big theory on differential logic describing the world around her through changes. The mathematical theory she is perusing is an excellent metaphor to the changes in her mindset as well as the challenges she faces throughout the story. The depth of the character comes across many times and the cross dressing isn’t a shallow idea thrown in, with Emma been able to have conversations that question her gender identity and add death to the themes present in the story.

Like in the first story, the third’s gameplay is centred around a theme to achieve the protagonist’s goal. In the story of Emma, the goal is to unlock the mathematical methods she can use to prove her theory while selecting the right methods at the right time. Jumping back to the second episode, featuring the artist Franz, the goal is to identify peoples’ personalities as he talks to them, to allow the player to find all the layers of the subject so Franz can paint the perfect portrait of them.

The story of Franz is one which embodies the truest emotions of The Lion’s Song. Franz is a child prodigy that fails to pass an enrolment test into the Viennese School of Arts and Crafts, because of this he moves to Vienna to live with his grandfather who continues to support his ambition. He is overly observant and identifies his model’s true selves in his artwork. It is a story that while sounding positive is mixed with a problem. The issue Franz finds himself dealing with is a barrage of constant blackouts after painting. His mental health is an issue and the extremes Franz goes to pursue his craft is one which is familiar to all protagonists in The Lions Song. Disappointingly I found the the fourth and concluding chapter as an almost fanservice addition to the title. The concluding chapter links together the episodes by placing characters who have been impacted or assisted the protagonists in the other episodes in a train cart heading out to war. The story I enjoyed the most from the additional conclusion is a story about Wilma from her brother, one which centres around his displeasure that she was musically inclined and the challenges he faced in their lifestyle. The story talks about how she was gifted her violin, how she got discovered and even a cheeky little exposé in how he tried to steal the violin once. It is story which lead me to research more into the challenges of violinists of that era leading me to learn about Wilma Neruda.

It is the small, seemingly insignificant details of The Lion’s Song that will make you smile the most as you explore the four episodic chapters of the game. It’s purely story-driven stuff, but with wonderful characters, all dealing with very real (and easily relateable) creative challenges, this is a game that provides players with a real look into the human psyche, and where the world’s great ideas and art come from.