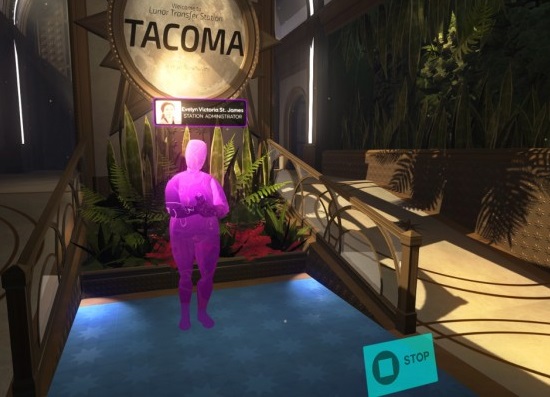 I’ve been excited for Tacoma ever since its original promotional screens from years ago, but upon playing it I think this isn’t really a game to get excited about. It’s very much a Fullbright game – building upon the interactive spatial-exploration of Gone Home, Tacoma is a narrative primarily about an outsider probing and investigating a space that’s been inhabited by someone else. There is nothing mechanically more complex than picking objects up and looking at them closely. Except this time, rather than masquerading as a horror game, it’s masquerading as a hard-sci-fi space story.

The science-fiction is definitely one of the most eye-catching aspects of Fullbright’s new project. The design evokes a futurist 80’s era neon strobe aesthetic reminiscent of Tron, but never in an overbearing way. The game also features an augmented reality social network, allowing players to more intimately delve into the interests and conversations of its core cast. There is lots of intentional glitching in the interface, both to create a sense of unease and to highlight how much technology has become a crutch in the game’s universe. Lastly, it seems like Tacoma needs to keep reminding players every now and then that they’re in space: antigravity segments, windows revealing the stars and foil bag food make constant appearances, all of these go to lengths to dissuade the inevitable Gone Home comparisons.

The story is also significantly more driven and much less of a mystery – a crew of six scientists on board a lunar orbiter go about their daily routines when, at their retirement party, a meteor strike destroys the station’s oxygen tanks. With time slowly running out, the narrative explores the emotional stress that comes with mortality, and how the characters change and buckle under pressure. The plot features things like superintelligent AI, human obsolescence and the philosophy of work, but I would struggle to argue that Tacoma is explicitly about any of those things. Rather than pushing any one point of view, the writers seem happy to place various elements onto the table and see how things play out. The result is something that doesn’t come off as heavy-handed or overbearing as hard-sci-fi can sometimes be, but instead represents realistic relationships to conjure feelings of comfort mixed with a contemplative melancholy. 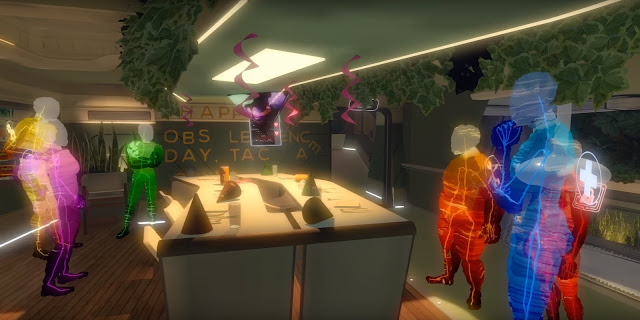 This atmosphere lends easy comparisons to thechineseroom’s recent title, Everybody’s Gone to the Rapture – and I’d wager most players interested in Tacoma would have already played the former. While Rapture’s beautiful English vistas are open for the player to meander through at their own pace, Tacoma’s space station corridors are much more directed. Fullbright clearly has a single path they want players to take, and they have no qualms with enforcing that. There’s also none of the surrealism or ambiguity that characterised Rapture’s narrative.

Taking cues from hard sci-fi, Fullbright’s space station setting is interested in seeing how its characters behave under crisis. The game’s superb voice acting and sound direction enables it to sell some memorable emotional moments, and as the story unravels the player will develop a real connection to each of the ship’s personnel. The writing is meticulous in keeping each character consistent whether in leisure or in strife, and the pacing becomes cinematic once the story starts rolling. It’s a game best experienced in a single sitting on a rainy afternoon with no prior information, like an novella or an arthouse film.

That’s not to suggest Tacoma is much of a thriller, however. There’s still plenty of meandering through corridors, reading the ingredients on toothpaste packages and counting the cacti on each character’s bedside tables. The team at Fullbright’s penchant eye for detail is back and in full force, and subtext is always going to be there if the player is looking for it. The environmental storytelling is powerful enough to represent everything from the way a couple’s behaviour changes due to a budding relationship, to the difficulties of fitting in as an outsider to an established group. Much of this is up to the player to discover. 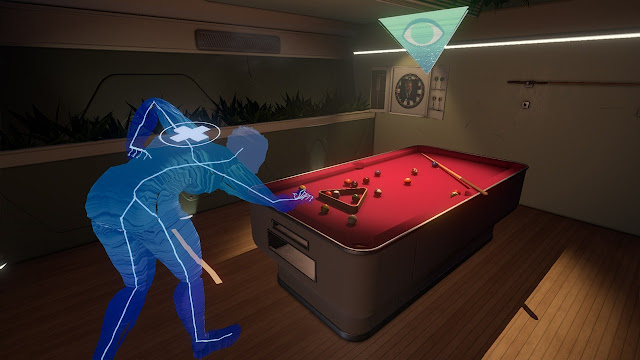 The game’s mechanics further reinforce the developer’s desire to appeal to inquisitive or voyeuristic players. The conversations in the game are recorded as part of the ship’s AR social network, so they can be played, paused, rewound and walked through at the player’s leisure. This means that if all six characters are talking and they break off into two or three smaller groups, the player can follow one strand of conversation to one part of the ship, and then walk back to see what happened in the other side of the discussion. Fullbright places the player in an extremely privileged viewpoint, from which the lives of all the game’s characters are bared open in both their public and private glory. It’s no surprise that after the game finished, I felt emotionally close to some of the characters: I had listened to their struggles, traced their daily routines, perused through their valuables done it all again thinking I’d find some further insight.

When you boil it down to its core components, Tacoma is very much a similar game to Gone Home – not because they’re both immersive narrative games, but rather their crux lies in empathy through voyeurism over everything else. Tacoma gives the player space to get to know its characters, and really know them deeply, which is why its moments of melodrama become so much more compelling than anything else we’ve seen in the gaming medium. It is indeed short, I will concede that, and it is not open even by walking simulator standards, but what Fullbright has delivered is rich, affecting storytelling that’s truly worth experiencing.