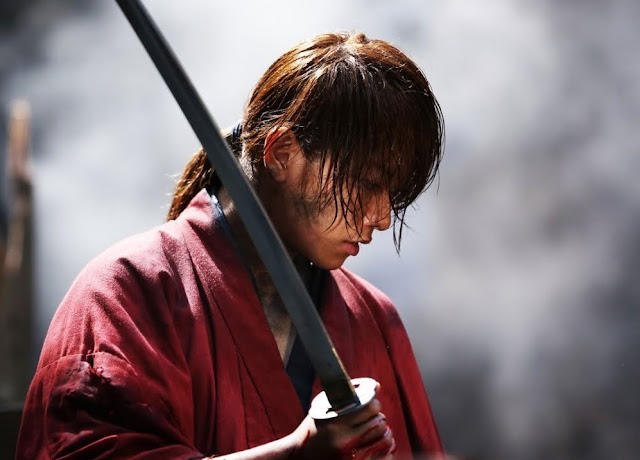 Our next review is the filmic adaptation of an incredible anime and manga series, Rurouni Kenshin.

It’s easy to see why Rurouni Kenshin is so respected among anime and manga fans in Japan. Telling the story of an ex-assassin who has sworn off violence as he travels across the tumultuous backdrop of the post-Bakumatsu era, the original manga touched upon notions of morality, personal change and Japan’s national identity all while codifying tropes for the wandering hero which would become staples in manga for decades. Director Keishi Omoto had big shoes to fill with his live-action adaptation of the much loved epic, but thanks to excellent cinematography and a talented cast, the first film was released to acclaim. Rurouni Kenshin: Kyoto Inferno is the second in the trilogy, but it’s perfectly enjoyable as an entry point to the series – it treads darker territory than the first, building upon the established character and further exploring the source material. 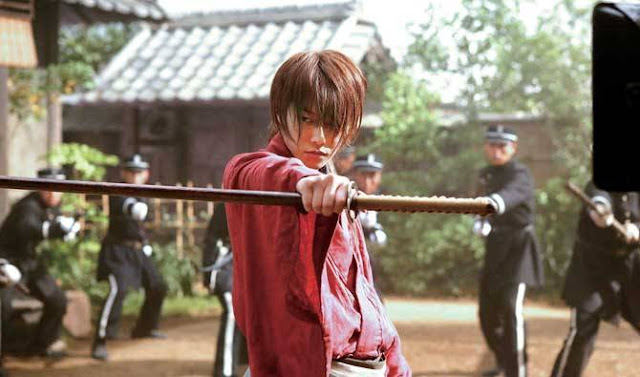 Related reading: For more information on the period of time, check out Matt C’s piece on the Shinsengumi.

What really struck me about Kyoto Infernal was how elegantly the setting informed the narrative. Kenshin explores early Meiji Era, a time where the Machiavellian tactics of the Tokugawa shogunate were giving way to a more Western influenced central government. This was a time where veteran samurai clashed against police under martial law, where assassins clashed with politicians for the right to determine a holistic vision for Japan’s future. Kyoto Inferno’s protagonist and antagonist embody this opposition perfectly. Kenshin is an ex-assassin who has sworn off bloodshed, and aims to atone for his past sins by resolving conflict through nonviolent means. His adversary, Shishio, sees the unstable and weak-willed new government as a ripe opportunity to muscle his way to power. Both sides believe they are a “correct” ideology, and both philosophies influence how the characters see the world and respond to plot developments. It’s a truly fascinating glimpse into Japanese culture at a time where it was malleable and prone to debate.

Kyoto Inferno also doesn’t shy away from looking at the darker aspects of this historical period. It bears its share of scenes that question the audience’s understanding of traditional good and evil, and while it can be a little heavy-handed at times, there are still plenty of scenes that got me thinking. It’s a film which portrays revenge as a temptation, brutality as a kind of boldness and pacifism as an arduous path which might be more trouble than its worth. Kenshin is consistently beset by moments where his reluctance to kill hinders the wellbeing of those around him, or even makes him an outsider to Japanese culture. By contrast, Shishio is a truly impressive villain, commanding the respect of a veritable army and proving himself adept at everything from guerrilla tactics to grand military scheming to one-on-one combat. This is all sold thanks to a meticulous eye for detail in period-recreation, and the film ends up pulling you right into the middle of these difficult moments.

This is, however, a chanbara story after all, and while political intrigue and explorations of morality are good, they’re a side attraction to the swordplay. Thankfully, the fights in Kyoto Inferno are magnificently choreographed and are a delight to watch. If you’ve enjoyed the original manga and anime, there’s still something magical that happens upon seeing it performed by live actors. Takeru Satoh, with a Kamen Rider role under his belt, is no stranger to physical choreography and his expertise really shows in his performance as the agile yet restrained Kenshin. As the character uses a backblade – a sword blunted so it will not cut – each strike makes a satisfying thwap sound, but the fights are no less thrilling with this addition. 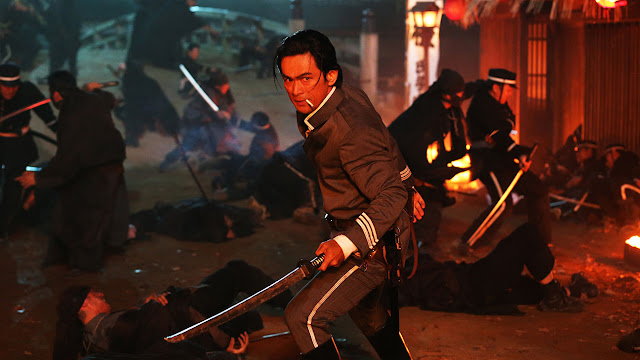 The film strikes a good balance of one-vs-one duels and one-vs-army showdowns, leading to some standout scenes. The choreography is balanced by a clear “some, but not too much” philosophy. There are some gratuitous slow-motion scenes, but not too much. There are some moments of wince-worthy violence, but not too much. There are some flash steps and impossible leaps, but not too much. The focus on physically reproducible sword fighting leads to fights which feel believable yet unpredictable. There are also dozens of fighting styles on show, all of which are used to characterise the film’s eclectic cast in addition to building the visual spectacle. All of this would not be possible without the work of a spectacular cast. Munetaka Aoki as Sanosuke was a clear favourite, as he manages to steal every scene he’s in – his swinging movements and weighty fighting style makes an instantly likeable character. He even has an exaggerated bored face to distract you in scenes where he’s a mere background character. Ryunosuke Kamiki’s gleeful expression as Seta Sojiro also made for a very convincing villainous sidekick, and the duel between himself and Kenshin is made all the more memorable for it.

While the original Kenshin movie was made to be standalone, Kyoto Inferno was filmed alongside The Legend Ends, which unfortunately means there’s a lot of plot payoff set up by this film which is dealt with in the next. The film builds up a hero’s journey structure, except with a mini-resolution and a promise of bigger things to come. It’s hard to resist the urge to load up the next movie immediately – the transition is perfectly done – but prepare for a little disappointment if there’s any gap between seeing the two.

Otherwise, there’s nothing which tarnishes Omoto’s adaptation of the classic Rurouni Kenshin story. The film seamlessly blends thoughtful drama with artfully performed fight sequences to form a compelling narrative that shouldn’t be missed by any fan of Asian cinema. If you were ever wondering if a live action film could do justice to the legendary franchise, see for yourself and be amazed.