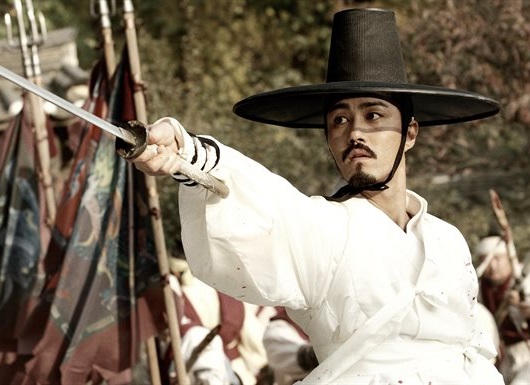 Today’s film review is a historical period film from Korea, Blades of Blood. Click here to be taken to the Dendy Direct page.

Korea has always been on the losing end of history. A speck of land within the greater part of Asia, it has always been wedged in between nations of incredible might, and over and over again it has faced invasion and subjugation from the likes of Mongolia, China, Japan. Now it’s split into two separate nations after a bitter and horrific civil war. One half, to the north, is ruled by an insane despot. The other faces devastation of the greatest degree as its closest ally, ruled by an insane wannabe despot – the one coloured orange and compensating for tiny hands – is threatening nuclear war with the aforementioned northern half.

Yes, Korea is one of the most unfortunate places on earth, and its people some of the most undeserving of that poor fortune. I chalk Korea’s film industry up to that. Whether it’s Korea’s infamous horror films (because they’re more terrifying than anything you will ever watch elsewhere), its dramas, which are often wildly transgressive, or its historical films, there always seems to be an edge of angry fatalism, or even nihilism, to them. In Korean films, a common thread is that its characters go through extremes, and never seem to end up the better for it at the other end. 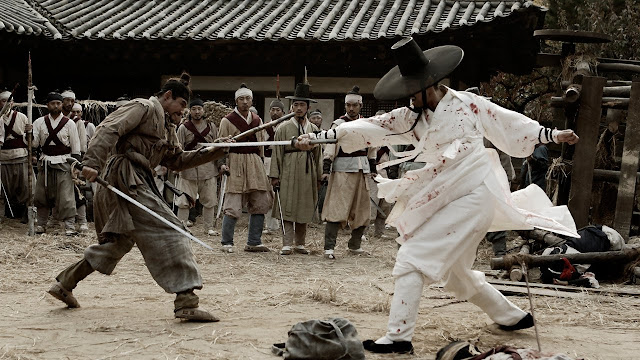 Blades of Blood is very much a Korean historical film. It’s actually based on a graphic novel by Park Heung-yong titles Like the Moon Escaping from the Clouds, but it’s not necessary to have read that book; I know I haven’t (and I’m not even sure it has been translated into English). It tells the story of a bitterly divided Korea, and a personal story of revenge, set against the impending invasion of Korea by Japanese Sengoku warlord, Hideyoshi Toyotomi. Without giving spoilers away, if you know how history went, and how successful that initial invasion was, then you can probably guess what’s going to happen in the film.

What instantly struck me was how we’re invited to almost forget about the impending invasion. Every character knows it’s coming, but deep differences in how to actually deal with it leads to civil strife on multiple fronts; the actual ruler of Joseon (Korea) can’t make up his mind on what to do because two dominant factions are telling him the polar opposite strategies to one another. Meanwhile, the film’s main antagonist, Lee Mong-hak (played with masterful subtlety bt Cha Seung-won), tired of the indecision from the political leaders and the persecution of the freedom force that he was trying to form to repel the Japanese invaders, rises up in rebellion and starts a civil war. With political intrigue and outright rebellion at hand, no one has any energy left to actually form a defence against the Japanese.

But wait, there’s more. Lee Mong-hak’s former best friend, the blind swordsman, Hwang Jeong-hak (played with larrikin nobility bt Hwang Jung-min) sees reality better than any around him, and understands the real dangers of what’s going on. Yes, it’s not a subtle bit of symbolism, but it’s effective. He sets out with a illegitimate son of a nobleman that witnessed Lee Mong-hak murder his father on a quest for revenge. Along the way, the blind swordsman trains the youth in the use of weapons, and they get embroiled in the political climate as well.

There are plenty of tales of blind swordsmen throughout Asian cinema, but rarely are they as downbeat as this one. Once again, there are no winners in Blades of Blood, and at times it’s a difficult film to watch for that reason. But it’s told well, with masterful cinematography and performances, and while I’m nowhere near expert enough in Korean history to vouch for its authenticity, it feels the part there. This is powerful, moving historical cinema, and a sharp contrast to both the soaring epic nature of Red Cliff, and the entertaining fantasy of Rurouni Kenshin. This one’s a far more serious film in tone, and works hard to be a discussion and criticism of the divided nature of Korea itself – as relevant today as back then. It could almost be seen as a call for Koreans to put aside their differences and find some nationalistic fervour before it’s all too late, though I don’t think the film’s particularly heavy handed there, if that was the intention. 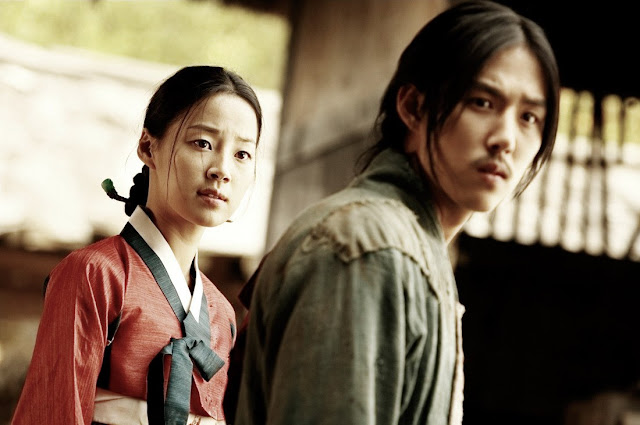 Made with a small budget the film does a good job of showcasing the beauty of Korea within the limited sets that it had to work with. The cinematography is gorgeous and does some wonderful things with light at times. People going into it expecting an action film, as the trailer and promo imagery suggest it might be, might come away a little disappointed, however. There is indeed some sword fighting, but this is ultimately a period drama, and with one particular set piece aside, the sword fighting is functional and over quickly so the characters can get back to the talking.

This really is powerful cinema, and certainly one of the best films that I’ve seen come out of Korea. I’m a big fan of historical fiction, of course, but Blades of Blood is sharp, heartfelt, and moving.