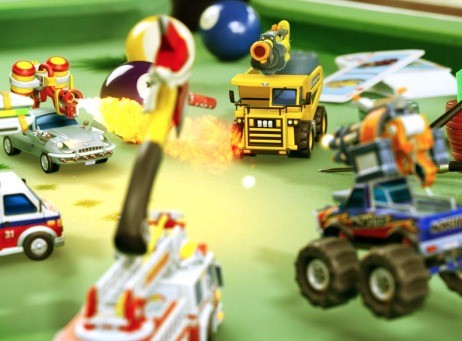 In what is a fond memory of mine, I inherited from my grandfather his collection of Matchbox cars. Some weren’t in that great condition, nor were most of them rare or collectible by any means, but often, much to the amusement of my grand imagination as I child, at the power of my fingers I was a world car driving champion. I built courses out of anything I could find around the house, albeit many of these items were other toys I had or what other objects I could find laying around my room, yet my creativity knew no bounds as I was the faster racer in the world, with the power of my cars, and the track at my fingertips.

Micro Machines is nostalgic to me for this very reason. And while I have never played with any actual Micro Machines toys, nor played any previous game in the series, immediately I felt like I had been here before. Much like the memories I have as a child, the gameplay of Micro Machines World Series puts the player in control of their own vehicle, as it races around a track made of everyday objects. Players can either compete against one another online, or there is local play also available, with the added bonus given the simplicity of the game design, means anyone can pick up a controller and enjoy themselves.

The offline mode is quite limited in its offerings, as the developer Codemasters has opted for a more online focused game. There your standard race and battle modes on offer, with both modes offering some diversity by providing different race and battle variations. You can play with up to four players at any one time, with the remaining players filled by the AI. Races are simple enough to comprehend yet surprisingly difficult to master. As a top down racer, your field of view is relatively limited to what you can see ahead of you so the first few laps often is more a test of your reflexes rather than driving capabilities, with the following laps reliant on your ability to memorise when to turn. Unlike the precision you would normally expect from Need for Speed or even kart racing family favorite Mario Kart, the controls feel very slippery and at times unforgiving. Try to fix a slightly wrong turn and you could be snaking off the track or driving into a wall. 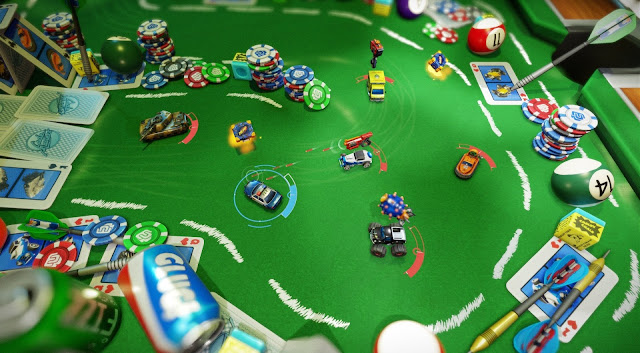 There is no indication of a car’s particular stats, if it handles well, has faster acceleration or a bit more weight to it, and through my various plays I never felt that the cars are different from one another, aside from their looks and weapons in battle mode. Where the cars you pick are a skin in the races, battle mode is where they allow you to bring out some of your personality. The car you pick is equipped with a substantial arsenal which have the capacity to pack quite the punch. The police car has guns and the ability to call a police helicopter to round up any getaway enemies, where the spy car can cloak itself and become invisible to avoid bullets. It makes them different enough to make the battles that more interesting than everyone having the same stock standard weaponry.

By far the most appealing aspect of Micro Machines is its design. There is a big nostalgic kick in the guts with some of the tracks, littering them with toys and objects that anyone could find laying around the house. It helps that Hasbro games owns Micro Machines, allowing a spectacular battle arena on the Hungry Hungry Hippos board game. The cars themselves are visually diverse enough to offer up enough for everybody, including tractors, hovercrafts and army tanks.

The game is heavily online focused encouraging players to take the race online with up to 12 players … that is when you can find a game with 11 other people. The online environment is quite underpopulated already, unfortunately. Luckily there is the ability for the remaining player slots to be filled with the AI, yet this is something that could have just as easily been achieved offline (without the two minute wait to start the race). The game plays just as it would offline, however I was unable to test if there would be any impacts of latency as I could not find enough other people to play with. There is the ability to race in the games ranked mode, which opens up to players once they reach level 10 – the game suggests playing offline with the AI to hone your skills (as there is nobody else to play with). Loot boxes are available in game also, to reward players with custom skins and emotes, again to show off to the empty lobbies online. 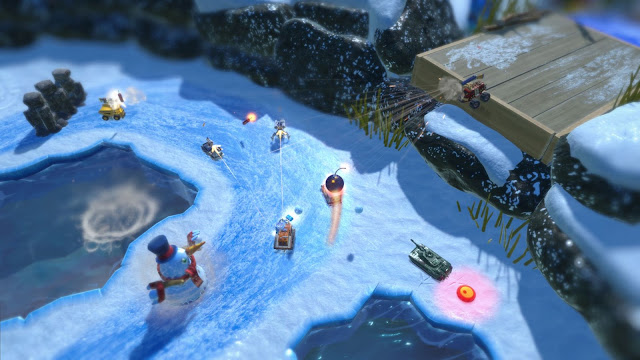 Micro Machines World Series encourages online play as the preferred method to play the game, and for good reason. It’s a real effort to get four players on one couch to play together. Would it be easier to encourage players to the game if the mechanics were stronger, definitely. But no one is playing online and there’s just not enough value in the game unless you’re able to somehow align the stars to get a full group of players online. Do this game again, but shift the focus so that everyone can enjoy it without relying on others being online, and then we’ll talk.