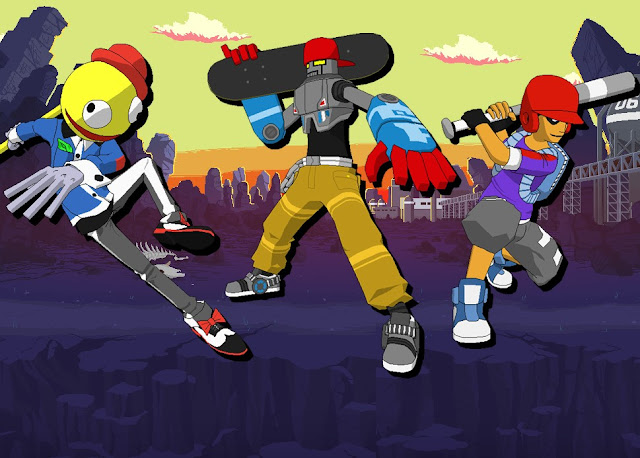 Did you ever play “Roseball”? In the wake of the console release of Street Fighter IV way back in 2009, this mini-game emerged where people would play what was effectively Pong, but played in a Street Fighter setting. Each player would pick Rose, a character with the unique ability to reflect fireballs, the server would throw the first fireball, and then it players would reflect it back and forth until someone got hit or let the ball fly past them. Roseball certainly had a simple premise, and it was mostly played for laughs, but a surprising amount of depth emerged in the use of different fireball speeds and character positioning to try get the upper hand.

Lethal League, from indie developer Team Reptile, takes the essence of Roseball and builds into a fully fledged game, and the end result is something quite remarkable. Lethal League is an incredibly simple game on the surface, but that belies a level of strategic depth that few games can match. It’s a fighting game at heart, but without the execution demands, flashy combos, or elaborate traps that have come to define the genre; instead, it pares it back to the core: the moment-to-moment mindgames, control of the game space, and the ability to outwit your foe in the heat of battle.

The premise of the game is simple: try to hit the other player(s) with a baseball that’s flying around the screen, and stop them from hitting you by hitting the ball away when it comes towards you. Simple! But each time anyone hits the ball, it gets faster, and with good players (or a well set up training mode session), it gets blindingly fast – like, hundreds of miles per hour, with the ball’s graphic just a blur on screen. 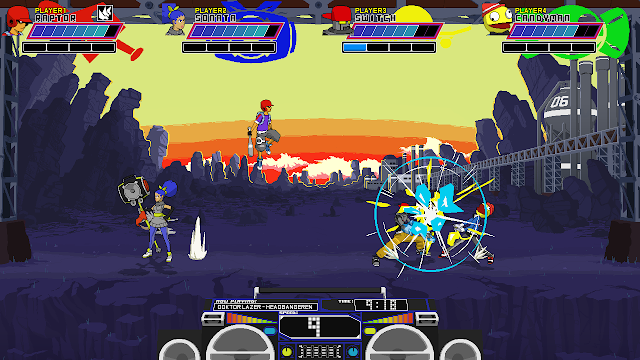 You can move about the arena freely while all this is going on, so it’s not just a game of well-timed returns. You can jump, too, and hitting the ball while airborne can change its trajectory, so that it starts ricocheting off floor, walls, and ceiling, Arkanoid style. You can also do a powerful downward smash from a jump, sending the ball groundward with some extra oomph. Then, when it all gets too much, you can bunt the ball to stop its momentum and lob it slowly into the air above your head, ready for you to jump up and line up your next assault. Each player has a set number of lives (7 by default, but you can change this), and each time you’re hit, you lose a life, but then get to serve the ball on the next round. The last person standing wins.

Between just three buttons – hit, bunt, and jump – Lethal League creates a fascinating game of it reactions and wits. You can just blindly wail away, driving up the ball speed and hope that your opponent chokes before you do, but that probably won’t work too well. But throw a bunt in there, or even just moving forward a little bit can be enough to change the timing of the ball, forcing your foe to swing at air and take a high-speed baseball to the face. The direction changes from jump attacks and smashes add another factor to contend with, and another way to try bait your enemy into opening up to a nice beanball.

Fighting game players will be familiar with the term “yomi”. It literally means “reading”, and here, it refers to “reading” a player. You predict what the other person’s going to, and you do something else designed to counter that. But if the other person reads your read, they can counter your counter – “I knew that you knew what I was going to do”. And say it goes on, with layer upon layer of yomi, as players try to predict opponents’ actions (or bait them into doing something) and react accordingly.

Lethal League is all yomi, all the time. At worst, a good read will shut down your opponent’s offence and take control of the match, like a well-timed bunt against a foe who’s aggressively thwacking away to drive up the ball speed. At best, good yomi gets you a point – like when, against that same aggressive opponent, you rush forward and return the ball from point blank range so that they can’t react in time. If you’ve got momentum and your enemy’s on the back foot, you can anticipate what they might do and shut down their counter attempt: you might leap forward to smash their bunt attempt, or jump back against a rush counter so that you dodge the ball and can slam it on your way down.

So, as a competitive fighting game, Lethal League is innovative, simple, and deep. I’ve no doubt that it’ll be a crowd pleaser at tournaments and such, too, because it’s all kinds of exciting to watch.

That brings us to the game’s one big failing: outside of the competitive side, it’s got nothing at all to offer. There’s an Arcade Mode of sorts, and you can play versus matches against the CPU, but that’s the extent of single-player content. As much fun as Lethal League is, those modes get very tired very quickly, so multiplayer is all that’s left. You better have friends to play with locally, because online play is – in my experience – laggy to the point of being unplayable, and the servers seem rather dead. 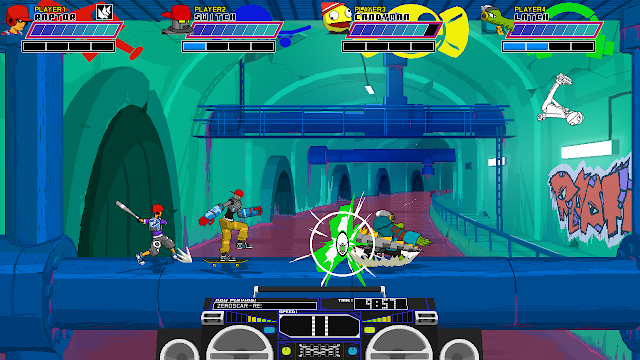 Granted, this was made by a small indie team, and if resources are limited and something has to be set aside, I’d much rather it be the single player stuff. When it comes to fighting games, there’s no point having story modes, challenges, and all that fun stuff if the game at the heart of it all is broken or boring, so Team Reptile is right to focus on getting the core fighting system as solid as possible before filling the game with fluff. Still, that’s something to be mindful of – if you’re looking for the sort of solo experience that games like Injustice and Dead or Alive offer, you’re going to be sorely disappointed.

On the other hand, if you come at Lethal League looking for a smart, well-designed, quirky, deep, creative fighting game that cuts right to the core of what makes the genre so exciting, you’ll find it in spades.