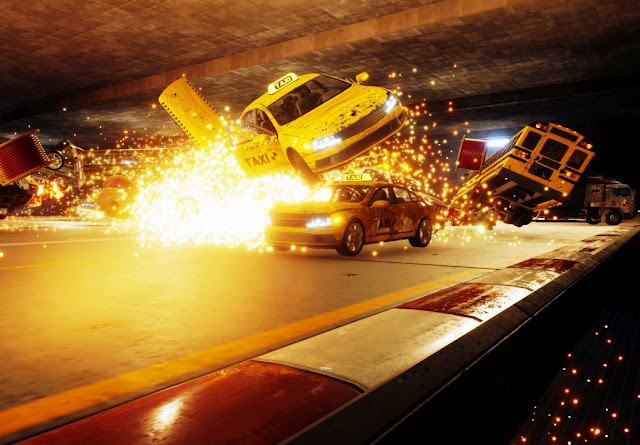 I’ve always played racing games the wrong way. Always wanting to push the boundaries of what I was allowed to do, I found myself pushing cars all around the track in TOCA Touring Cars, handbraking into other cars in Gran Turismo to fly around corners at extreme speeds, and driving around Peach’s Castle in Mario Kart 64 just because I could.

Then along came the Burnout series, which were racing games that outright encouraged me to push the boundaries, crash into everything and destroy the joint. It was the most fun I’d had with a racer in my life. Perhaps it was the demolition derby events that my father used to take me to when I was little, perhaps it was my obsession with watching how cars twisted and turned when driven by a Crash Test Dummy. Whatever it was, I love destruction, as long as no one is hurt.

So where did Danger Zone go so wrong? Initially it felt rather easy to put a finger on the problem, but then more and more problems began to rear their ugly heads. The culmination of it all is that as an experience as a whole, Danger Zone is very shallow and very bland at heart. 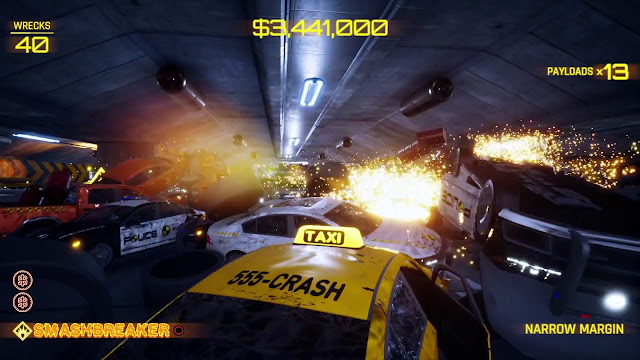 The first, and most glaring issue I had was with the aesthetics. The whole game takes place in a simulation lab. Things are made of metal and neon lights light up the joint like a hologram. Every level takes place in this lab, and the scenario never changes. It feels drab because it takes away the excitement of what made similar games feel so good. Driving along a meadow and crashing into a busy intersection of virtual people on their way to work sounds downright sinister, but it was exhilarating. Knowing that I’m driving into robot buses and cars with no drivers or passengers inside makes the game feel empty as a whole. There is absolutely no thrill in feeling like you’re causing no actual carnage.

The aim of the game is to cause as much damage as possible. You can replay the levels over and over again to earn better medals and increase your standings on the leaderboard. Smashbreakers can be earned, which with a press of a button basically make your car explode, adding a multiplier to your points and blowing up vehicles within your radius. Multiple Smashbreakers can be earned in each level, causing the multiplier to grow and grow and a better chance of winning the gold medal. You can control your car in midair, which is weird, and I honestly don’t have anything good or bad to say about that, other than it defies the laws of physics so… yay?

Danger Zone is a puzzle game at heart, so the levels are designed so that players can learn how the level is constructed, and can make adjustments to their driving and where and how they use Smashbreakers. Paying attention to what vehicles appear at what time is key, and shows that there is some depth to the title. 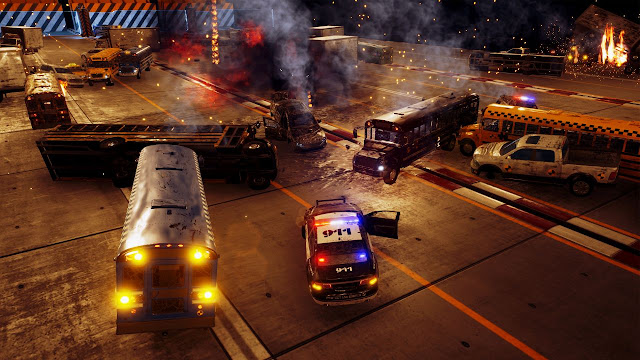 Bizarrely there’s no replay mode either. Watching the destruction and spectacular car pile ups from multiple angles seems like a no-brainer to me. Saving them or sharing them so they can be viewed by friends sounds like a great opportunity to build a community around the game, but its absence is a glaring missed opportunity.

To go back to the aesthetics, as mentioned before, the game is in a drab simulation. The crashes themselves, being the focal point of the game, are uninspiring. Cars don’t wrap themselves around walls, they don’t crunch like an accordion when hit headlong into a bus. All the game offers are some cosmetic dents to the cars and explosions which instantly gut the car for some reason. Debris can hardly be seen flying off cars. I get that the game may not have had a tremendous budget, but it’s just disappointing that more couldn’t have been done to make the game at least draw people in by looking interesting.

The game itself can be fun in fleeting moments. And there aren’t really any alternatives to what this offers, in this form, so that’s a plus for it. However, the campaign is short and the visuals are just terrible. Players may feel like a change of pace, and driving headlong into traffic is always fun in video game land, but quite how the developers managed to make something like this so lacking in excitement is quite beyond me.

Short ‘n Sweet reviews: Catching up on the 3DS

The Nintendo wrap! Also all things E3 and getting back into Final Fantasy XIV (Digitally Uploaded 2017, Episode #22)