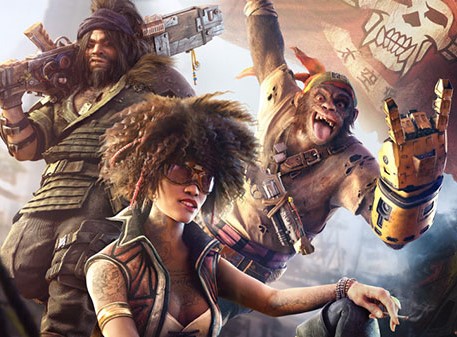 Beyond Good and Evil 2 has been a long time coming. It was actually announced way back in 2008, but then we heard nothing more and it seemed doomed to the vaporware graveyard. Or, at least, it would’ve been doomed if Beyond Good and Evil’s legions of fans didn’t keep pestering Ubisoft’s Michel Ancel about it, and if Ancel himself didn’t take every opportunity to drop teases.

There was the time he interrupted a livestream for Rayman Legends to show off some concept art of Beyond Good and Evil protagonist Jade for no apparent reason. There was the year Ubisoft “accidentally” posted a picture of Jade’s uncle Pey’j to Facebook days before E3, then took it down hours later. There were mysterious Instagram posts, and comments from Ubisoft stating that it hadn’t been cancelled, but going no further than that. For nigh on 10 years, this was all we heard about this much-anticipated sequel.

Well, the teases and the vague comments are (probably) finally over, because today, Ubisoft re-revealed Beyond Good and Evil 2 during its E3 conference. The announcement came courtesy of a lengthy cinematic trailer introducing some of the key characters: Knox, “a punk-ass monkey hybrid who is always looking for trouble”, and Shani, “a badass biker and ingenious mechanic of Somalian ancestry”. In the trailer, they’re trying to working over a ruthless crime boss – let’s just say that the little golden pig artifact is not, in fact, made of gold.

Beyond Good and Evil 2 will be a prequel to the first game, set before Jade’s birth and in a different galaxy, though the trailer does hint at how the games are connected. Other than that, not much is known about the game itself or the story, but it appears to share Beyond Good and Evil’s unique sense of world design and characterisation.

One thing that does really excite me is that Gabrielle Shrager is the narrative designer for this game, and she shared the stage with Michel Ancel for its reveal. She was one of the writers for the excellent Valiant Hearts: The Great War, so I’m sure the Beyond Good and Evil 2’s story is in good hands with her. The fact that one of the narrative leads was chosen to help introduce the game also suggests to me that story is front of mind in the game’s development, which is a good sign.

There was no official announcement of platforms or a release date, but I’d say PS4, Xbox One, and PC are a safe bet. Don’t expect to see this before 2018 at the absolute earliest.