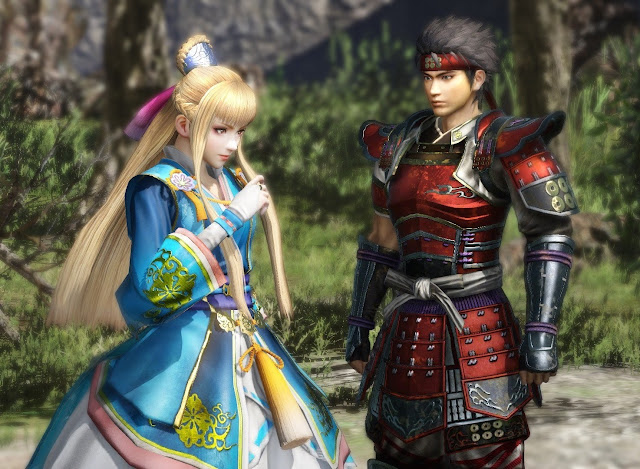 I wasn’t all that keen going into Samurai Warriors: Spirit of Sanada, truth be told. I love Samurai Warriors with an absolute passion, but the Sanada aren’t high on my list of favourite samurai from those games (or history itself), and I was almost certain that the game itself would act as filler while we wait for the next proper Samurai Warriors game.

Related reading: An in-depth interview with the producer of this game.

I also assumed that Spirit of Sanada was made for reasons that wouldn’t translate out West. Indeed, I was surprised to hear the game was even being localised. Koei Tecmo clearly chose the Sanada as the focus of the game to fit with the Sanada Maru TV series that was running in Japan last year (when the game came out locally). In the West the prominence of the Sanada is far less prominent, to say the least. So the “free advertising” just isn’t there.

But for all that I was wrong. I want all Warriors games to be built like this going forward, because Spirit of Sanada has done a far better job of capturing what I love most about the franchise – its characters, history, and narrative – than any other previous Warriors game. 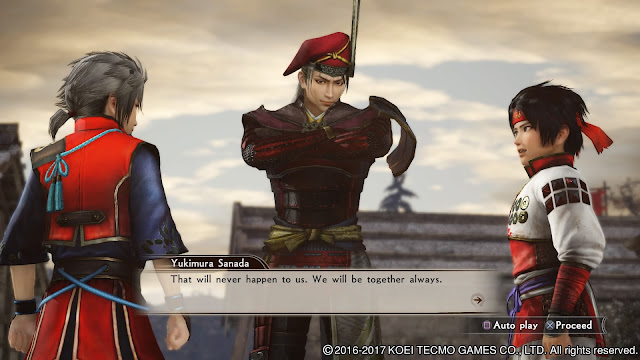 Most Warriors fans expect that their games will feature dozens of different characters to choose between, and a set of different stories to follow along with. Koei Tecmo has, over the years, experimented with doing this in a number of ways. In Samurai Warriors 3, for example, each character had their own storyline, even as they fought in many of the same battles. In recent Dynasty Warriors games, players have had a couple of different story arcs to choose between, depicting the rise and fall of each of the major “kingdoms” through the era, and could play a range of different characters through the story, as appropriate for that particular battle or scenario within the broad narrative arc.

Spirit of Sanada really does focus the action on a single story within the broad Sengoku period (the 150-odd year civil war that the Samurai Warriors series is focused on). Players start the game in control of daddy Sanada, as he participates in battles as a relatively insignificant warlord on behalf of the mighty Takeda family. We even get to see Samurai Warriors fan favourite, Yukimura Sanada, as a cute little kid. From there, the story charts the growth in power of the clan to the point where it’s one of the most feared military powers in Japan, and its eventual decline right towards the end of the Sengoku period. It’s a story that’s by turns inspiring and tragic, and there has been no game that has dealt with any part of Sengoku history in a manner this comprehensive before.

It’s a long story that spans generations of the Sanada, so settle yourself in for a long ride. As the game moves through the eras, you’ll get to fight with just about every samurai who was allied with the Sanada at one point or another (and in the game of thrones that was the Sengoku period, that’s a startlingly large number of the standard Samurai Warriors cast), but the game always comes back to the Sanada and your main character will always be a Sanada. While this might seem limited to people who have played through the Sanada stories in the previous Samurai Warriors games, you’ll be surprised to find that this game stretches out a very long way. 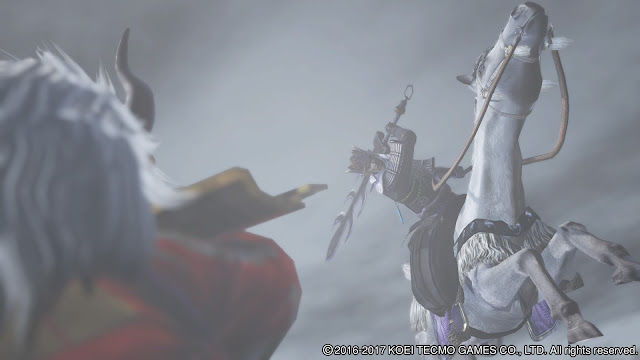 One of the benefits of focusing the story on a single family is that the developers at Koei Tecmo have been able to focus on storytelling. In between battles, you’re able to have whatever Sanada you’re playing as at that point wander around town, talk to the locals, indulge in a spot of fishing and farming, and otherwise just lap up the atmosphere of being in medieval Japan. The game is utterly gorgeous, and the conversations that the characters have are simply filled with historical notes and facts. In fact, the game runs a full encyclopedia to catch you up with the more minute details about the Sengoku period, and then encourages you to carefully read through it as the game progresses.

Related reading: Why the Samurai Warriors games are far more historically authentic than people give them credit for.

As with all Samurai Warriors games, Spirit of Sanada is careful not to cast judgement about which side is in the right across the various conflicts. Rather, it focuses on simply portraying the individual stories and inter-character relationships that would lead to one major battle or another. I know that people don’t necessarily come to video games for history lessons, but pay attention to Spirit of Sanada, and you’ll come away from the game with a far better understanding of what happened (at least, for the events that the Sanada participated in). It’s all quite carefully researched for accuracy to the real history. I like games that encourage people to learn something as they play along.

In addition to having hub areas to explore, Spirit of Sanada does a couple of other things that we haven’t seen in Samurai Warriors games in the past. Not every venture is a major battle, for example. You’ll frequently have the opportunity to leave town and explore lands nearby for extra resources or to complete subquests, and these little ventures show the confidence the developers have in finally being at a point with the Warriors series where it doesn’t need to be all about the “button mashing;” that the environments are interesting enough to explore, and that deeper, JRPG-like progression won’t upset the core balance of the bigger battles. 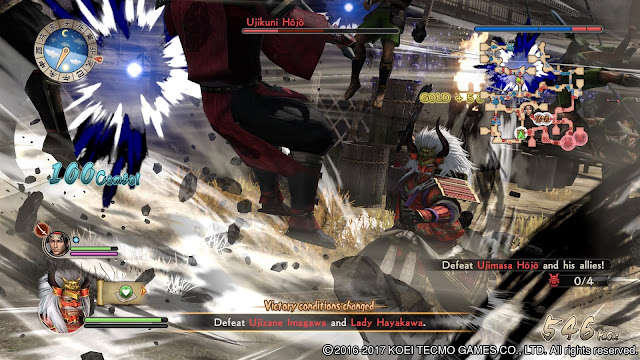 Those bigger battles are also handled intriguingly. For a start, they’re no longer confined to a single battle. Each major conflict is contested over a couple of different battlegrounds, with the events in one battle impacting on what could happen in the next encounter. Players have access to “stratagems,” which can make the successful completion of a battle easier, but in order to be able to activate them they would need to have completed a certain objective in the previous battle.

This system is dynamic and exciting, and gives objectives a far greater weight than in previous Warriors games. Where in those games each battle was self-contained, so non-critical objectives could be failed without consequence as long as the boss at the end of the battle was defeated, in Spirit of Sanada you’ll be sweating over every “optional” objective, knowing that a mistake will cost you an advantage in the next, harder battle. This structure better mirrors how military conflicts worked in the Sengoku era, where each major battle was preceded by minor battles, sieges, feints and withdrawals. And, on a simple level, it’s exciting to participate in a flowing campaign rather than a sequence of individual, unrelated battles.

By the end of Spirit of Sanada you’ll have learned something, enjoyed the prettiest Warriors game to date, and seen just how far Koei Tecmo’s been able to take this series, so that it’s no longer purely an action game. With Spirit of Sanada, we see a future for the Warriors franchise where every battle and event is given context and purpose, and it’s a far deeper and more rounded experience for that.

Lu Bu got nothing on Honda TBH #PS4share https://t.co/B4KOlXnvqM pic.twitter.com/TPEgYWVckR

Every year NHK does a television series like Sanada Maru. This year the focus has been on one of the most prominent women of the Sengoku period (and one of the very few who was head of a noble family for any meaningful length of time), Ii Naotora. I rather like the idea of a game being focused entirely on her, so hopefully Spirit of Sanada has been successful enough that Koei Tecmo can do this kind of game annually as well.