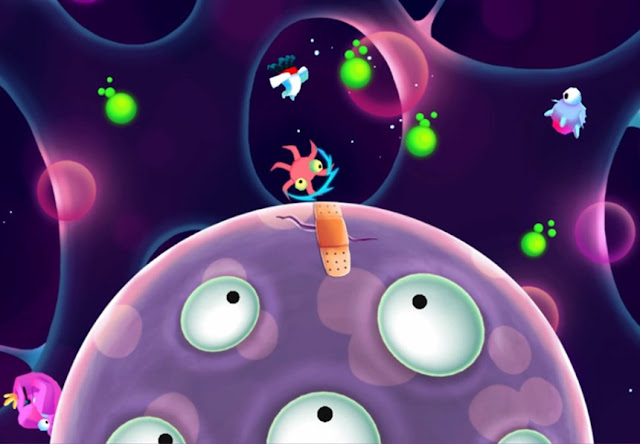 It’s nearing mid-May in Sydney, around the time where everyone and their dog is getting sick from the flu. So thematically, it’s great to be able to review Plasma Puncher, a game about being a white blood cell defending the body from disease. Developed by indie outfit TomatoTrap, this is a game which draws from classic beat-em-up sensibilities while flaunting a unique sense of charm. On the gameplay side of things, there’s more to be desired, but overall this is a fun title which is definitely worth your time.

Players are put into the shoes of a top-built white blood cell, a combat master of the punching variety. Punching stuff is always a fabulous game mechanic, so the first few waves of the game are a delight – enemy cells will appear trying to ruin your day, and you’ll put them back into their place. Defeated foes drop yellow orbs which can be used to upgrade your abilities, unlock extra special attacks or recover your health, and they’re always in short supply so effective use of the orbs will be paramount to your success.

TomatoTrap really need to be commended for its production values here. The graphics are delightful – the player’s animations are weighty yet responsive, which is everything a game like this needs. Enemies are similarly well designed, with bouncy animations that ooze personality. Unfortunately, there is a slight issue with telegraphing attacks – some enemies will give you a windup to know when to dodge, while others will switch between docile and deadly without warning. These issues aside however, I have nothing but praise for the game’s art assets. The music is similarly high quality, featuring infectiously happy tunes that provide an excellent backdrop to fighting disease. 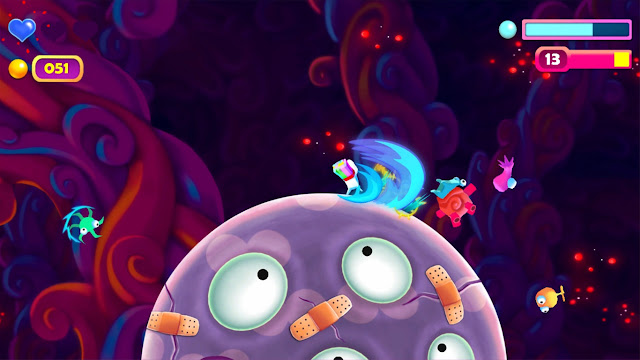 Levels become more difficult in increments, and between each wave of enemies the game saves its progress automatically. Upon death, you’ll return to the state you were in at the last checkpoint you reached, losing any upgrades and yellow orbs you may have picked up. Every few waves the game offers up a boss battle, all of which are surprisingly challenging – they’re not the standard fare you would expect from a brawler game and require careful dodging and attacking to overcome.

With enemies spawning left and right and nowhere to hide, Plasma Puncher very rapidly devolves into a ‘bullet-hell’ style brawler. The player is assailed by so many bullets and enemies that there is rarely an opportunity to get a hit in. I imagine the way the game is meant to be played is through liberal use of the throw and dive attacks, positioning the enemies into clumps and neutralising them en masse (kind of like a real life white blood cell, actually), but it’s a tough plan to execute once the chaotic enemy patterns get going. There’s just not a lot of room for strategy here. With a perfectly circular map there’s no mountains or walls to hide behind, and the single-button attack combos grow stale after lengthy periods of play.

It also surprises me just how long the developers expect you to play this game for. While all screenshots make Plasma Puncher look like a game designed for short bursts – and short bursts is perhaps the best way to enjoy it – completing the game is a monumental grind. Progression is tied to little blue orbs that sometimes fall out of enemies, which power up your super attack. It takes about 30-40 enemies defeated to use your super attack once, and you’ll need to use your super attack 8 times to break the cell wall of the microbe upon which you stand, at which point you’ll be treated to even harder gauntlets until you finally vanquish the microscopic intruder for good. A single run will take upwards of 90 minutes, depending on how much you die, which left me wondering why the game’s numerous waves weren’t broken up into more easily manageable levels. Plasma Puncher’s gameplay is not varied enough to demand that much of your undivided attention. 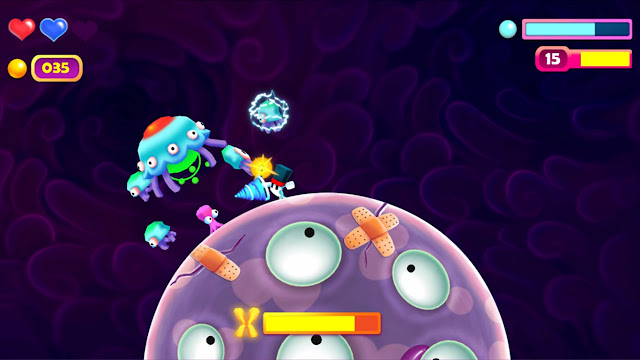 The game’s three difficulty modes will be more than enough satisfaction for genre fans. I found Easy mode to already be an adequate challenge, but Normal and Hard ramps up the tension by adding more enemies and making health recovery costlier. There’s also the option to play Hardcore mode, where your save progress is deleted once you die – though why anyone would want to voluntarily suffer that much punishment is beyond me.

In a nutshell, Plasma Puncher is a gorgeous, difficult and sometimes frustrating game. The excellent production values are overshadowed by some minor technical inconsistencies, but while I could spend all day complaining about the small stuff, the real weakness is a lack of gameplay depth. Even though the game features dozens of unique enemy types, the player will be constantly and mindlessly repeating the same actions – spamming the attack button and hoping they’ll come out on top. It’s not all bad though; punching stuff is still intrinsically fun, after all.