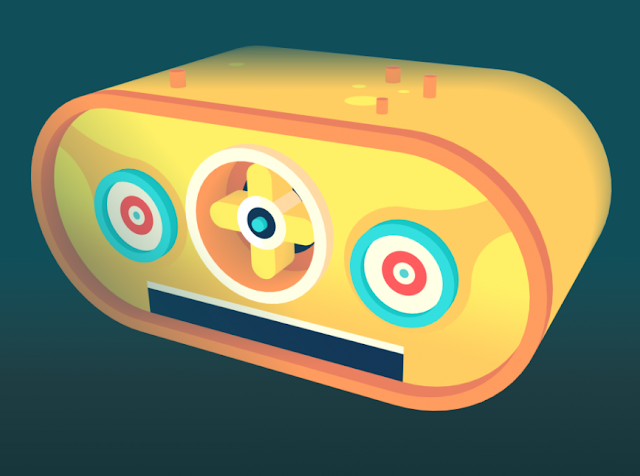 GNOG is delightful. It doesn’t really have a purpose, intent, or reason to exist, and that’s precisely why it’s a delight; it’s an acid trip given form and a playful bit of nothingness that’s really quite hard to put down.

Each “level” of GNOG starts life as a little parcel that unravels to reveal a box puzzle underneath. In very basic principle these are like those Japanese puzzle boxes, where you need to poke and prod different bits and pieces of the box in a specific order in order to open them up, but in GNOG they’re nothing so dry as that. One puzzle box might be a submarine that needs its eyes replaced (hey, I did say it was an acid trip of a game). Another is a space ship that needs to be repaired in order to visit a number of planets.

You’re thrown into each and every box with absolutely no instruction as to what you need to do. As such, the first couple of seconds on each level will be a process of orientation as you come to grips with what you’re seeing in front of you. There’s no time limits, nor any consequence in being “wrong,” so you’re encouraged to simply poke and prod around to see what you can do in each puzzle box. Only once you’ve got an idea of what can be poked and prodded can you start to figure out the order in which you need to actually do things in order to complete the puzzle and open that box.

Noodling around is a delight because each environment is just so charming. Each box is distinctive, colourful, and filled with character. It’s abstract or surrealistic to the nth degree, especially when you complete a level and the box starts singing at you while rings of colour (that would make the music video clips of stoner bands of the 60s proud) dance around in the background, but all that gaudiness is done with just the slightest hint of restraint that it needs to in order to work as an aesthetic. And this is important, because once you stick the VR headset on and play it that way, the colours and energy could have easily become overbearing to the point of being sickening. But GNOG is never sickening, and the raw escapism that it offers in VR makes it one of the most effective uses of the technology that we’ve seen to date.

None of the puzzle boxes are so difficult that they become frustrating. There are moments where you’ll simply have no idea what you need to do, but the no-stress environment means that by poking around long enough something will happen that will set you on the right track. Where some puzzle games are designed around conflict with the player; the idea that it’s a battle of wits between player and designer to see whether the player can come out on top, GNOG feels more collaborative. In this one, it feels like the designers wanted the players to succeed at each and every puzzle, and will gently nudge players towards the solution when they need it. Equally importantly, the game is never condescending. At no stage will you feel like the game design is dictating or talking “down” to you, either. Ultimately, solving each puzzle is on you, and it feels rewarding when you finally get there.

Having played a lot of puzzle games in my time, I can honestly say that I’ve never quite come across one like GNOG for these reasons. I was mentally engaged and stimulated, but not challenged. Challenge is a fine thing to offer players, of course. Jonathan Blow’s The Witness is one of the most challenging games you’ll ever experience, and it’s a puzzler (its challenge comes from more than the puzzles themselves, of course, but those alone can easily stump even the most experienced puzzle game fan). The Witness is a masterpiece, but it’s heartening to see that even in genres as staid as the humble puzzler, there are developers that are looking for different approaches to the very core fundamentals of the genre, too. I found myself drawn back to this game every time that I turned the PlayStation 4 on, because I knew it was going to put me under no stress at any point, and that’s rare indeed.

I have no idea how people will respond to the game. “Trippy” simply isn’t for everyone, and even if you’ve developed enough of an appreciation for acid of the years that you quite enjoy the psychedelic aesthetics (I’m not saying how I got there), then you’ll need to deal with the way GNOG actively rejects so much about how we play games. Throw in what some would interpret as a “lack of content,” and I can only assume that a lot of people will find this all pointless or a waste of money.

But stuff ‘em, they’re wrong. I’ve rarely been as delighted in simply immersing myself into a game as I’ve been with GNOG. It’s weird, it’s colourful, it’s creative, and every time I completed a puzzle box, and was given another “parcel” to unwrap and unlock another puzzle, I couldn’t wait to tear the parcel open, if for no other reason than to see just what kind of beautiful lunacy I’d get to see next.