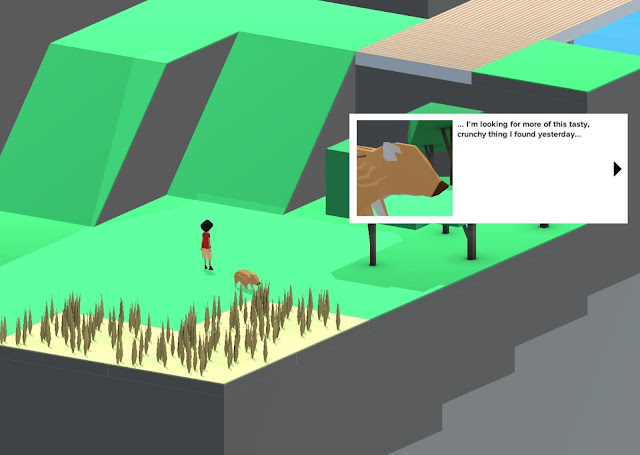 If you want to make me mad, tell me that global warming is a myth. Nothing stirs anger in me quite like someone arguing that scientific fact, proven time and time again, is actually a lie. Next time somebody starts that fight, I’m going to direct them to Block’hood then shut my mouth, because the game can speak so much more eloquently than I on the subject. Within three chapters of Story Mode, nay-sayers will have acted out an environmental disaster from start to finish. The sky will darken, the clouds will thicken with greenhouse emissions, and all of a sudden the carefully crafted world is just gone. The simulation is a startling look at past and current world trends, making Block’hood an absolutely essential title for just about anyone.

Story Mode is relatively short, containing only five chapters, but what it lacks in raw quantity it makes up for with poignancy. It begins with a young man wanting to fix up his treehouse in his local neighbourhood. Upon meeting a wild hog, he is slowly told about balancing, resources, and happiness. The hog likes acorns, which grow on trees; the trees require water, but only so much can come from the land itself so wells or water towers are a must. Blocks — for examples, trees or apartments — may require money, electricity, water, and/or a variety of other resources to function as intended. Every block built means taking from the land, and taking from the land isn’t without risk.

Bear with me for a moment here, as I veer off in a bit of a strange, therapy-like direction. I’ve spent a lot of time lately thinking about my values and my goals, as I’ve had to readjust several of each over the past year. What’s the difference? Values are like your moral compass, whereas goals are the exact GPS coordinates of where you want to be in life. Values tend to be all-encompassing whereas goals are far more specific. Which brings me back to Block’hood. The goal is obvious, to balance every block hit. But it’s the underlying values that push gameplay forward rather than the actual play itself, something I find utterly fascinating. What are the values the game puts forth? The first, which is always obvious and told from the point of the hog, is keeping the planet healthy. The second, which is also always obvious but this time told from the point of the young man, is having places for humans to live and enjoy. These values are at odds with each other and constantly shifting between balanced and unbalanced in either direction. Thank goodness there are no butterflies in the game (that I’ve encountered… now I’m concerned…) or else I’d be convinced one wing flap would knock everything over. It’s a near-impossible goal, balancing human’s wants and nature’s needs. 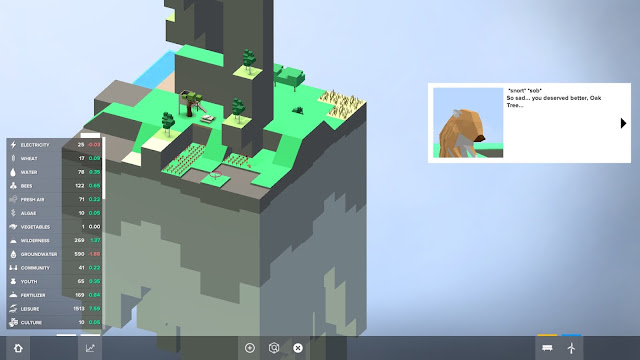 The bulk of Block’hood isn’t actually contained in the story mode; while it is a great segway into the gameplay and environmental issues, there is so much more than can be examined. That is where challenge mode comes in: there are two dozen scenarios with differing ease and objectives, each showcasing different environmental needs and the resulting balancing acts. Easy challenges can be, for example, collecting water, money, or knowledge. The intermediate challenges require further block balancing, and this is where things get challenging. The difficulty ramped up so slowly I barely noticed until I was pulling out my hair in frustration as my blocky world darkened under environmental threats thanks to building too many water towers or something of the like.

Here’s the thing with me and difficult games: we don’t get along. Often I find games are difficult just for the sake of being difficult, and why would I stress myself out more than I do in real life for no real reason? But Block’hood gets hard because quite frankly, the world is going to hell in a handcart and that’s a hard pill to swallow. The game explains how we’ve come to this point — because it’s easy, quite frankly. It’s easier to ignore risks and build human wants at an alarming rate than it is to take the time to do it properly. Even the first easy challenge, which involves gaining water, is a delicate balancing act. I can’t just build water towers, because they require money. For money, I need to have something worth selling and people to sell/buy. And THAT then requires electricity, apartments, and wasteful greenhouse gases. All for water.

Normally, I wouldn’t find much charm in the somewhat simple, blocky graphics. The retro look has been done past the point of a trend, to say the least. But having the elements resemble being made from teeny tiny building blocks is so apt for Block’hood: our world is built with piece by piece, block by block, just as the ‘Hood is. In my mind, if I zoom in I may see teeny tiny little Lego blocks forming the solar panels, trees, shops… just about everything down to the little people that inhabit the land. The visuals most definitely had a lot of care put into them, as the game perfects the balancing act between distracting visuals and content. The graphics enhance the content, not steal the show — and isn’t that a wonderfully rare occurrence? 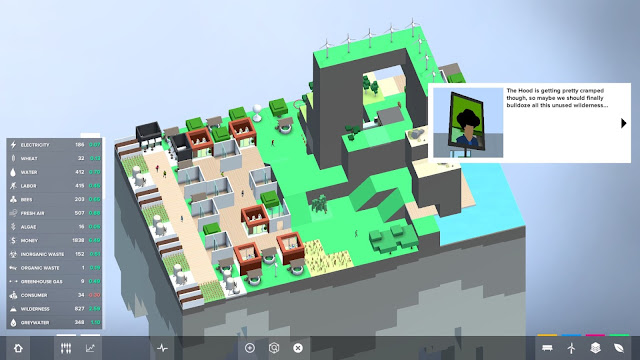 Let’s take a step back and examine Block’hood from a distance: it’s a city-building game with charming retro-styled graphics. With every step closer, with every minute longer played, the end goal becomes increasingly clear: showcasing the pressure our precious planet is currently under due to increasing human demands and decreasing natural resources. In general, I think humans know what’s coming. It’s the reason those huge blockbusters films about disasters do so well: no matter where we are from, what language we speak, we know that we are pushing the planet too far and possibly past the point of no return. We’re scared. So some people fight it (science!) and other prefer to flee (and pretend the threat isn’t there), but we’re all watching and waiting. Block’hood means I no longer have to wait. I know where the world is going. And I think I’d like to get off the ride now.

Review: The Legend of Heroes: Trails in the Sky the 3rd (PC)