Ever wanted to be a kick-ass mage with your own spells?

I love crafting. Give me a whiff of alchemy, stat-buffing food to prepare, or a blacksmith willing to transmute my goblin poisonpuffs and giant’s toerags into armour, and I’m lost to the real world. So imagine my response when I discovered that Borealys Games is not just developing, but actually finishing a beautifully cel-shaded game, Mages of Mystralia, devoted entirely to crafting your own spells. Not unlocking them according to a preordained progression system — no, with unfettered creative control in your young mage Zia’s hands. Please watch the trailer here and tell me you’re not instantly smitten with magic love!

You start out with a spellbook containing four basic spell types. These you can modify with runes, which you collect by solving puzzles and beating enemies. As you progress, the spellbook becomes a bulging tome of ever more complex spell combinations, allowing you to craft mega-spells. The spellcrafting grid can take four spell types, four elements and eighteen runes — allowing for an incredible number of possible combinations. The world and story have been brought to life by Ed Greenwood, creator of the Forgotten Realms setting for Dungeons and Dragons, so I expect to see depth of lore and an immersive storyline.

Borealys took the unusual route of sourcing funding to develop the base game, and only then reaching out to crowd funding in order to allow them to bring the game to the next level. The Kickstarter has already hit more than double the goal amount, so it looks like Borealys will be able to implement many of the polishes and extra features they hoped to bring to the gameplay. Mages of Mystralia is coming to Steam, PlayStation 4, and Xbox One with a prospective release window of Summer 2017.

Get your sleuth on (again) in this new Digimon Story title

I know I wasn’t the only one to be awed by the good reviews for 2015’s Digimon Story: Cyber Sleuth. Our own Nick H. praised the titled, stating right off the bat: “I was more than pleasantly surprised by my time spent with [the game]. JRPG fans will find a lot to like.” The next entry to the series has been officially announced, titled Digimon Story: Cyber Sleuth Hacker’s Memory. The game will tell the story of those on another side of the events depicted in the original Cyber Sleuth. I know you’re eagerly awaiting a trailer, so here you go!

Hacker’s Memory is set in the near future when the line between reality and cyberspace has been blurred. Players will use computer viruses — Digimon — generated in cyberspace to become a hacker and discover the reason behind the rise of hostile hackers/Digimon. In other words, the protagonist doesn’t want to save the world; he just wants to learn why other hackers are so hostile. The scenarios are all new, the number of Digimon appearing has increased to 320, and there are 30 new maps in addition to the 60 also used in Cyber Sleuth.

Developed by Media Vision, Digimon Story: Cyber Sleuth Hacker’s Memory will be out in Japan this year for PlayStation 4 and PS Vita. The game is also getting physical and digital Western releases in 2018.

Heeeeeeyooooo, so Square Enix just legitimised everyone’s purchases of the Nintendo Switch (after Zelda, I mean). The publisher has announced that a trilogy of the Seiken Densetsu games — the first three titles, to be precise — is being bundled up in a single package for release on June 1.

The first game of the series is known as Final Fantasy Adventure/ Mystic Quest out West, and it’s fairly forgettable. The second is Secret of Mana, which is one of the greatest games that ever graced the SNES. The third is a game that was never released outside of Japan, but apparently it’s very good!

The latter two games also have three player multiplayer enabled, so people will be able to play them as they were meant to be played back in the day. Otherwise, expect a fairly standard port of the games. Not that there’s much wrong with that; they are universally beloved titles for a reason. Sadly, the fact that the third game was never translated makes it fairly unlikely that this collection will get a Western release, but you just never know, and hey, the Switch is region-free anyway.

When I heard the first intimations of a new Radiant Historia game, my immediate reaction was to slot my old DS cartridge into my 3DS and start a New Game. Hours later … I remembered I needed to prepare this news story for you! Initial hopes of an entirely new game — a sequel perhaps to the original strategy RPG — turned to a more sedate but still joyful response as we learned from Atlus, via a Famitsu preview, that it is in fact a remake subtitled “Perfect Chronology” that will come out in Japan on June 29 for the Nintendo 3DS. What struck me when I started my new game was how fresh and crisp the game still looks and plays, considering it released in late 2010 in Japan, then in early 2011 in North America (it never made it to Europe). The lively character portraits are absolutely gorgeous, and even the backgrounds don’t look too bad by modern standards. It makes eminent sense to pick one of the all-time great SRPGs, with existing outstanding art assets, a hauntingly beautiful soundtrack by Yoko Shimomura, well-written dialogue and snappy, interesting combat; as director Mitsuru Hirata said in his Famitsu interview, “We reviewed the playability and improved it overall.” 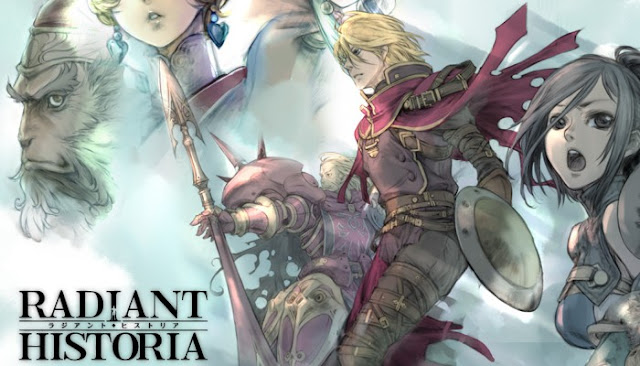 Radiant Historia is often compared to Chrono Trigger, as both involve time travel. There are significant differences, however; Radiant Historia features non-linear branching storylines, with a great amount of player agency to travel along the timeline and alter events, their consequences rippling through the parallel world histories (Standard and Alternate) and times. Indeed, philosophical conundrums such as “what is the ‘true history’ of this world?” are embedded in the story. Atlus is ramping up this concept further now with the addition of a third history: the Sub-History. This is not just a single parallel world; each aspect of the Sub-History is different from the Standard and Alternate History, and the character who holds the key to this new scenario is the mysterious Nemesia.

There were no voiceovers in the original Radiant Historia, but the Perfect Chronology remake includes a full lineup of voice actors. The 3DS version will have enhanced graphics (with character design handled by Masaki Hirooka) and added visuals for event scenes. The game will offer two modes: “Perfect Mode” allows you to play a newly added Sub-History in addition to the original Standard History and Alternate History right from the beginning. “Append Mode” starts with Standard and Alternate History, and after clearing those you move on to Sub-History. Difficulty levels are also introduced. Development is 95 percent complete. We have no word yet on a localisation — but frankly, I would consider it a crime of the highest order if we in the West didn’t get a release of what is bound to be another jewel in the 3DS library of Japanese RPGs. Who knows, maybe we can even dream of the Radiant Historia franchise making the leap to the Switch.

Why aren’t we more critical of nationalism in video games?