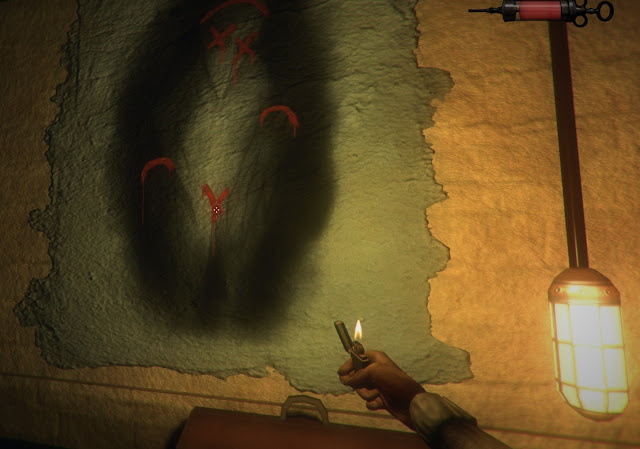 Imagine waking up in a room filled with tacky decor from the 50s. It’s dark, barring the scant light filtering through the windows because of the ominous lightning storm that’s raging outside. You don’t know your own name, you don’t know where you are, and the only thing you’ve got on hand is a lighter. The one thing you know is that you should probably get the funk out of the haunted mansion that you’re in and hightail it back to your normal life, whatever that may have been. And so, it begins.

Getting the funk out of places is the main premise of The Crow’s Eye, both mechanically and narratively. It’s a horror and exploration game in the style of Amnesia, but at the same time, it’s like bits of Metroid Prime cross-pollinated with Rush Hour (the sliding block game, not the movie with Chris Rock). That’s not a slight, by any means; I loved Amnesia, I will defend any title with Samus in it until my dying breath, and younger me was also incredibly adept at any sort of game with sliding blocks. I just genuinely don’t know how else to describe the mish-mash of genres and aspirations that live within this game, and so any resulting metaphors are likely to come across as a little clumsy.

Disclaimer: If you’re looking for a ton of spooky delights or things to dismember in self-defence, then this probably isn’t the game for you. I say probably, because The Crow’s Eye does have some jump scares, but encountering them is a matter of seeking them out like some sort of crazed, adrenaline junkie. You don’t really have to go out of your way to avoid anything scary in this game because, well, how scared you get depends on how far off the beaten path you stray. In this case, the beaten path is a series of strategically lit objects that guide you straight to the next quest objective. When I was getting used to the rather sparse approach to storytelling and the slow ramp of the plot in the beginning, I actually appreciated having the game occasionally yell “GO THIS WAY, IDIOT,” via creepily opening a door or bathing a room in toxic gas and closing off every other route. It was actually genuinely scary to have debris fall from the ceiling out of nowhere, or to have doors lock ominously behind me and for lights to suddenly go out while I was exploring. 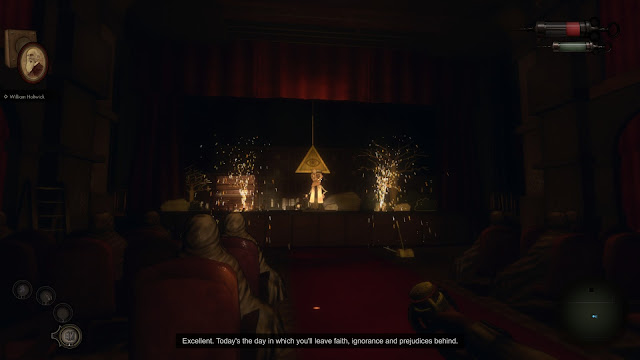 When I finally started resisting the urge to jump at every shadow after the game’s constant nudging, I started noticing the small things. For example, I realised that every element that could be interacted with would produce an immediate response, whether aural or tactile. Break some objects? You’re usually rewarded with a slithering noise that seems just far enough away for you not to worry. Crawl along a vent? The shaft you’re in might emit a foreboding screech and you’ll have your heart in your throat, panicking about everything collapsing under your weight. Any surprises would quicken your heartbeat and show a corresponding visual response in the form of the player character’s outstretched hand shaking with various degrees of intensity. In case you wanted an insight into my mental state after an hour of enduring the game’s shenanigans – I ended up freaking out for a good minute or so when crosshairs showed up on my screen because I’d been conditioned to expect a) something attacking me, or b) the audio making it super obvious that something was about to attack me. However, neither materialised, which only made the entire experience more tense; after relying on various reactive cues to help me determine how terrified I should be, having them taken away from me periodically helped to keep the game fresh and to keep me on my toes.

Before you shoot em’ up fans get too excited, however, the presence of crosshairs isn’t because the game anticipates combat. The crosshairs are actually there in order to help you manipulate the environment, whether it’s turning a wheel, stacking up boxes, or throwing objects at hidden switches. In fact, once you get over the initial trepidation of playing cat-and-mouse with a deranged scientist in his own private heaven of malpractice, The Crow’s Eye appears to trade in some of its core horror elements for a much more restrained brand of survivalism – mental gymnastics and physics exercises. While the game shares mechanics with other titles like Outlast in the sense that you’re unable to fight back against the villain of the day, the resemblance pretty much ends there. In order to progress in this game, hiding and sneaking are completely irrelevant. For that matter, examining your surroundings with a fine-toothed comb doesn’t add too much to your overall experience. “What do I do to get to the bottom of the story,” you cry? It’s simple – get good at first-person platforming.

Yes, you heard right. A lot of the game’s crucial navigation in later levels involves first-person platforming. That’s where the Metroid Prime comparison comes in, actually – around the halfway mark onwards, getting around in The Crow’s Eye means leaping from moving object to moving object whilst being completely unaware of how much space you actually take up since you can’t see your own damn feet. Much like Metroid Prime, there are glitches, and they happen fairly often. Sometimes the game spits out some fairly innocuous and amusing ones e.g. harmless gas leaking through walls, platforms splintering off into darkness, rubbish heaps appearing to be impassable terrain upon first glance until you glitch another object through them. Well, they’re amusing until they start affecting your fundamental ability to navigate your surrounding environment. 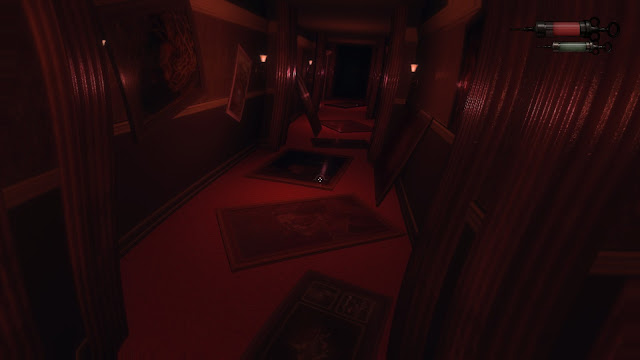 Remember how I said that you couldn’t see your feet? Add the resulting lack of consistent spatial awareness to the fact that leaping to a moving platform sometimes meant that you glitched to a nearby unwanted location and voila! A recipe for disaster. I like to think that I’ve got decent hand-eye coordination cultivated after years of rhythm games and Smash Bros, and it wasn’t the idea of platforming that had me hung up; it was the fact that some incredibly tricky sections required the use of an additional mechanic that combined the functionality of the Companion Cube from Portal with a handheld propeller. Have you ever tried to launch yourself six feet upwards and backwards to safety whilst aiming between your legs and having no idea if you were going to succeed or simply get shot back onto your backside into toxic sludge? Well, you’re going to get comfortable with that idea extremely quickly if you want to get through The Crow’s Eye at a decent clip.

The platforming isn’t the only deviation from the bog-standard conceptions of horror that have come out recently, however. All kinds of puzzle mini-games make an appearance throughout the game, and it’s up to you to solve them all at least once if you want to make any narrative headway. I thought that the introduction of the puzzles was a nice touch – some are based on memorising sequences, others are based on executing actions at specific locations within a time limit, and some were good ol’ sliding block puzzles. The learning curve wasn’t too steep, and it made my various Einstein moments incredibly satisfying, barring the times that physics appeared to be working against me for some unfathomable reason. I appreciated that the atmosphere of the game wasn’t diminished in any way by me having to take minutes at a time to roll some cubes around to make a picture, and this likely has everything to do with the excellent ambient soundtrack and the smatterings of narrative significance that reared their head whenever it came to a puzzle room.

Meanwhile, the accompanying VO had the right mix of manic and desperate for the occasion, and while there were occasional hiccups in pacing, there was no doubt in my mind that the villains were out for my blood and that they were determined to get it. The only complaint I’d have about the puzzles is that once you mastered their concepts, they didn’t get any harder as the game progressed. Instead, they’d become more drawn out. I’d have to align seven cubes instead of four. I’d have to flip nine switches in different sealed rooms instead of five. Perhaps I’d have been more engrossed in the mechanics if they’d ramped up the difficulty of the problem solving in the game as the plot was driven to its climax. As it turns out, being subjected to a seemingly endless chain of puzzles with only a scrap of paper telling one side of a many-sided tale as your reward gets pretty old around the eight-hour mark. Ultimately, the narrative was barely strong enough to keep my interest, even without docking points for the many false alarms you got from the game in the form of an old man screeching “You’re almost done!” after the conclusion of a particularly lengthy Portal-inspired session. 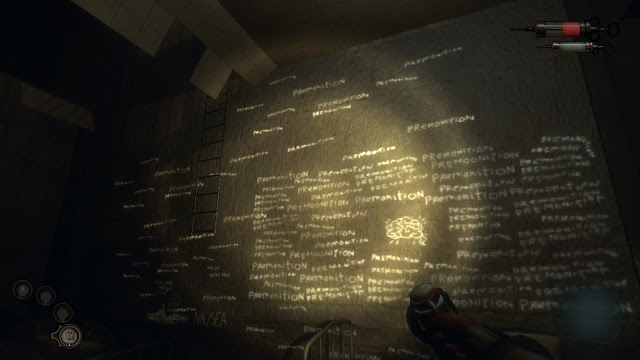 On the balance of things, The Crow’s Eye borrows heavily from other existing titles in terms of mechanical inspiration. That’s not to say that it doesn’t have original concepts, or that it’s incapable of convincing narrative twists. The problem with the game lies in the fact that as a hodgepodge of various gameplay styles, it loses its core horror identity and coherence. There are plenty of brilliant ideas here and I’m not penalising 3D2 Entertainment at all for choosing to draw from successful titles – it’s hard to innovate an entirely fresh IP in this day and age, and the worth of a game shouldn’t solely be determined on whether or not it’s mastered the relatively Herculean task of having Totally New Thoughts. It’s a game about what could have been, both from the protagonist’s perspective and also from the player’s point of view. The Crow’s Eye shone when it came to dealing with suspense and psychological distress. I only wish that it’d played more to its strengths in the end.

Retro Reflections: On Gregory Horror Show; when Capcom was at its greatest