If you’re going to make a sequel to a game, make sure it’s an actual sequel. I really loved the original Siralim. It tickled my nostalgic itch with its ridiculous menu system, super old-school character design, and commitment to roguelike difficulty. It was a game that would continue to reward you no matter how long you actually played it for, and it is a hidden gem on console and PC for people to people who played games back in the 80s and 90s to discover and delight in.

Related reading: You can also read Matt’s review of the original Siralim here.

Why Thylacine Studios felt it was appropriate to build a sequel to Siralim, I’m not entirely sure. This “new” game, Siralim 2, doesn’t actually do anything differently from its predecessor, rendering one or the other effectively redundant. There’s simply no reason to play both, and as I was playing I couldn’t help but wish that the developer had taken the success of the first and used it to do something meaningful.

There are any number of ways Thylacine could have gone. A wireframe dungeon crawler in the vein of the old Wizardry games would have allowed the developer to reuse the same monster assets, and keep many of the same combat systems, while giving players something fresh in changing the perspective from Siralim’s original top-down roguelike perspective. Or another alternative would have been to keep the same gameplay and perspective, but switch up the art, taking things from the 8-bit tiles of the original Siralim and giving players Super Nintendo-style 16-big graphics. That way retro fans could have played along with the “generational jump effect,” as though they were rediscovering a forgotten series from yesteryear.

But instead Siralim 2 gives players the exact same game as its predecessor, just with a bit more stuff to collect and do. Sadly the original game wasn’t exactly lacking for “stuff”, so the work done in adding more to it just comes across as bloat.

Siralim is a monster-collecting game in the vein of Pokemon. Players explore dungeons, encounter enemies, and then aim to extract “cores” from those enemies that they can take back to home base and use to summon replicas of those creatures to fight on their side. Then they can equip those monsters will skills and artefacts, before plunging back into the dungeon to level them up and look for even more creatures.

Because the game’s levels are randomised, and endless, this loop needed to be addictive, because it’s all the game’s got, and it is very addictive indeed. The menus in the game will intimidate at first, because there is so many of them, and just like the games of old, some of the most important menus are buried deep within this unwieldy interface. But, once you’ve got the hang of it, That unwieldy interface becomes the starting point to a great deal of depth, and customising your party and monsters is something that you’ll play at for hours, trying to figure out the best possible combination of characters and abilities. 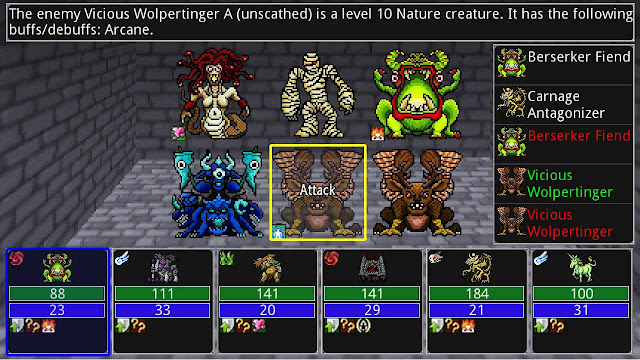 And, with over 500 monsters to recruit, spread across numerous (again, endless) worlds, you’re going to be spending an awful lot of time in Siralim 2, if you let it get its claws into you. The worlds in the game are also filled with subquests, from tracking down treasure to answering the riddles of dwarves and appeasing gods. There is more of this stuff than in the previous title, giving you a reason to properly explore each dungeon level, which is welcomed, though even with this, the nature of randomisation means that you’ll quickly start to come across the same things over and over again, and eventually these can become an irritant in the way of the basic monster collecting and levelling loops.

As with the first game, there’s barely a thread of the plot holding Siralim 2 together. On the one hand that’s fine, because again a narrative might distract away from the basic play loops, but on the other it’s yet another area where the game fails to differentiate itself from its predecessor. If Siralim 2 had have taken the original gameplay structures and overlaid a plot with some depth over it, then that would have been a reason to check the new game out, even if we weren’t looking at something that would inspire Shakespeare. As it is, thanks to a streamlining of the base hub, where there are even fewer NPCs to talk to than in the previous game, the narrative elements of Sirilim 2 are even softer.

None of this matters if you haven’t played the original game, of course. Buy Siralim 2, and if you’ve got any appreciation for old-school difficulty, art, and presentation, you’ll love the way that the game adheres so closely to tradition. Without any narrative context, or indeed an “end” as such, you may, over the longer term, feel like playing the game is fundamentally pointless, and while that’s true, it’s also the kind of game you can pick and play for half an hour here and there as an indulgence in between other games, without feeling like you need to commit to a time-consuming RPG in one great big block. I’m still playing the original Siralim over a year after playing the first, and it’s precisely because it doesn’t pressure me into “completing” anything that I find myself coming back to it when I’ve got some time to kill. 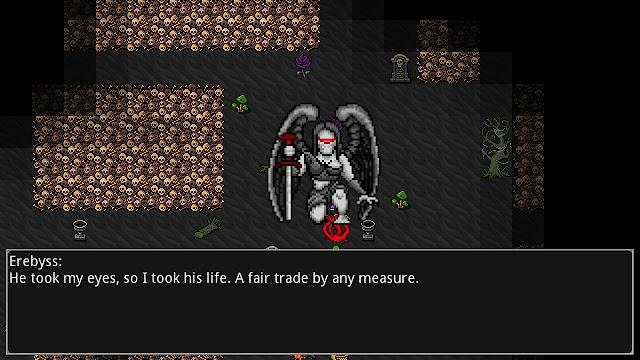 But if you have played the original Siralim, the impression that the game is unnecessary will be overwhelming. Siralim 2 simply does nothing substantial to build on the foundations of its predecessor. It’s very much like those sports games that simply update the roster of players without actually changing the game in any way from one year to the next… except that sports games developers don’t really do that any more. I want to see more Siralim, but if there’s to be a Siralim 3, I do want it to be something different this time.

On Mass Effect: Andromeda, the mobile games we actually play outside, and collectibles! (Digitally Uploaded 2017, Episode #12)