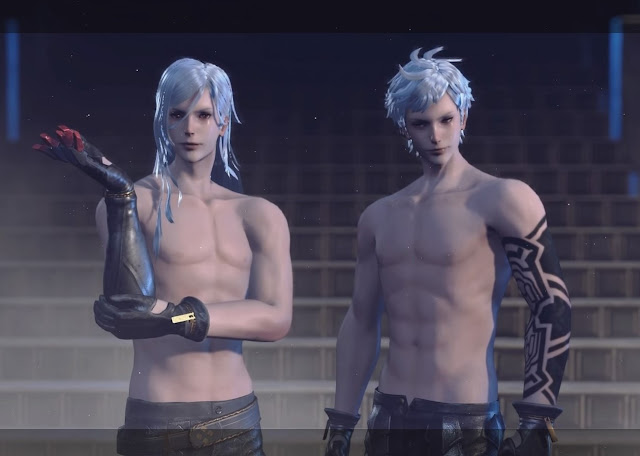 NieR: Automata is a very dense game, and it covers off a great many themes, ranging from gender and identity politics, to the impact of religion, the meaning of existence, and the structure of video games themselves. One of its absolute key themes, however, and one that binds most of the rest of the game together, is the continued debate about what it is to be “human” – or at least the kind of rational thought and behaviours that we prescribe to humanity.

This debate itself can be looked at both from the perspective of the androids that you control through the game, and the robots that are, in theory, their enemies. For the sake of this piece I’m going to look specifically at the enemies, because NieR’s director, Yoko Taro, does some really interesting things in exploring this theme through those robots, and it’s something worth discussing in isolation.

It goes without saying that the following is going to be spoiler-heavy, though I’m going to stick to the first plot arc through to the first “main” ending. If you want to avoid spoilers, then simply don’t read on.

What I find most interesting about the structure of NieR is the way that the flow of the game’s “dungeons” themselves fit with an escalating argument about what it is to be a person or human, by presenting the robot enemies as increasingly more complex in their motivations and behaviours with each subsequent dungeon. Similarly, we can look at the arguments that people make about what is is to be human as a series of increasingly complex key points that run in parallel with what the game does. 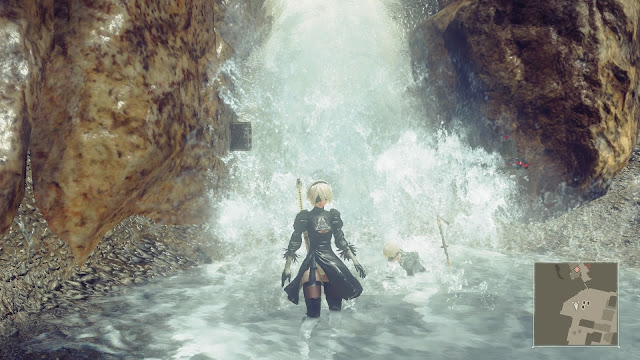 When I say “dungeon” I do mean it in the most abstract of ways, because NieR: Automata doesn’t really offer traditional dungeons. Rather it has what is probably best described as “sequences”, where players head down a rather linear pathway that culminates with a boss battle at the end of it. These sequences are all themed after something, with that theme leading back into the broader narrative, and the five most identifiable “dungeon areas” break down as so:

The first takes place in a desert. Here, the Androids encounter robots that display basic communication skills for the first time. That sets them back, as they thought the robots were incapable of independent thought at all, and that’s what makes the behaviour of one particular robot most interesting: he runs away from the androids in fear.

Later, after catching up with the robot, the Androids witness a mass of robots re-enacting the motions of sexual intercourse with one another. This motion was, of course, pointless from a biological point of view, but this whole sequence really highlights the first argument around what it means to be human.

Humans all have the fight-or-flight response hard-coded into our psychology. Indeed, it’s a response that kicks in far more frequently than any of us are really aware of – ask a psychologist if you don’t believe me. Further to that, while sexuality permeates through much of our existence, and we create concepts such as “love” to explain it, the reality is that that’s a biological impulse in itself. 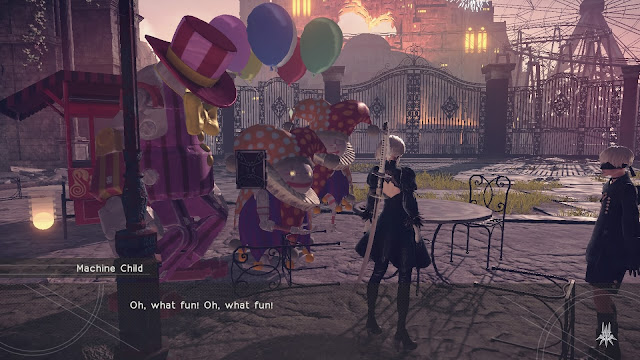 So, what Yoko Taro is doing through this sequence is not so much exploring the idea of what elevates a being to humanity, but rather he’s exploring the idea that, at a fundamental level, so much of our existence operates on a very primitive level. And yet we still consider ourselves, as humans, to be of superior thought and distinct from other biological beings. This first “sequence” is there to establish that that is not really the case.

2) The second “dungeon” takes place at an amusement park. This is a “sequence” that is chalked up as being “weird” by many people, and looking at it from a purely visual design perspective it is a very odd environment, with very odd enemies, but there’s a very critical perspective on the nature of humanity that the sequence offers, too.

When looking for intelligence in animals, biologists look for a wide range of things, of course, but one is that the animals have a concept of play. Play is something that is regularly observed in the more intelligent species of birds, for example. Why is this important? Because play for the sake of play, as simple as the concept is, requires advanced thought that is beyond fulfilling the biological impulses that are required for day-to-day survival. This dungeon, therefore, is the first point in time that we could definitively argue that these robots are close enough to human to be morally “persons”, and it’s not co-incidental that immediately after completing this dungeon we encountered the peaceful, philosophical, friendly, and humane “break-away” robots and are welcomed into their village. Never again are we to assume that the robots are stupid or hostile.

3) The third “dungeon” takes us deep underground, where the androids speak to the game’s primary two antagonists – Adam and Eve – for the first time. We also discover here that the aliens, which were supposedly creating and controlling the robots in the endless war with humans, had actually been destroyed by the robots, which were now working independently and with free will. 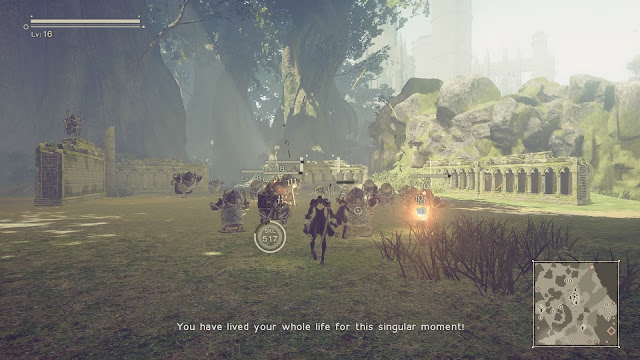 The idea of rebellion against one’s parents, and the gaining of free will, is a rite of passage that is really considered to be unique to humans. The ability to develop one’s own moral and intellectual core, and to rebel against authority when the authority and the person’s own center is a clear sign of intelligence, and, in his extreme way, this is what Yoko Taro was exemplifying through this sequence.

4) Directly opposing the ideology of rebellion in the third “dungeon” is the fourth, where the androids witness an army of robots throwing themselves into destruction in a bid to protect their “king”, which turns out to be a completely weak and helpless baby robot.

This is the first time that we see the robots able to commit to ideology, and, regardless of whether that ideology could be considered “good” or “evil,” the robot’s ability to form discipline around it (organised military units and all) and commit to a concept that is more than is contained in the physical world implies a very high level of intelligence and society indeed. Ideology is a completely human concept, any by the time we’ve met this “king of the robots,” there should be no further questions about Yoko Taro’s argument that “humanity” is less to do with biology than it is to do with thought and reason.

5) The final dungeon sequence takes place in a factory, and here the robots both embrace and question religion. This is a nod to perhaps the most ultimate thinking of all; genuine philosophy and grappling with questions such as religion, the meaning of life, and existentialism itself. Because the robots are portrayed as being both in awe of religion and either terrified and critical of it, we see that, regardless of where you sit on the topic of religion, it both impacts on you and helps to define your personhood. 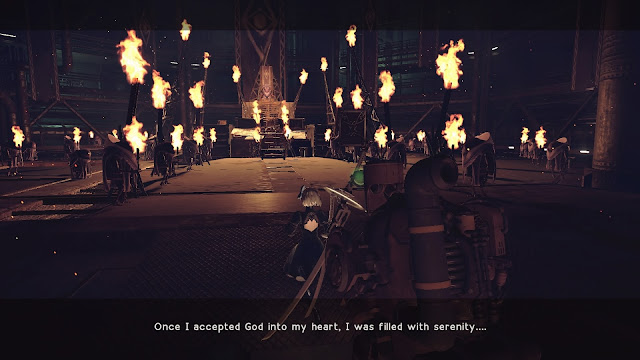 Ironically, given that the complexity of the questions that religion throws up, this is by far the most simple “sequence” to interpret of all in NieR. That is the case because, simply put, by this point in the narrative the humanity of the robots is firmly established, and the tone of the game has shifted towards deconstructing the moral righteousness of humanity and human intelligence as a concept, rather than resolving the question of what it is to be human.

Yoko Taro’s ultimate point, which he expresses as much through the pacing of NieR: Automata and its level design as he does through its explicit storytelling, is that the question of what it is to be human is layered. From the most primitive of urges, right through to having the intellectual capacity to question existence itself, humanity is a series of impulses and ideas… and the one that we so often define ourselves as – our construction of flesh and bone – is perhaps the only irrelevant criteria to personhood of all.