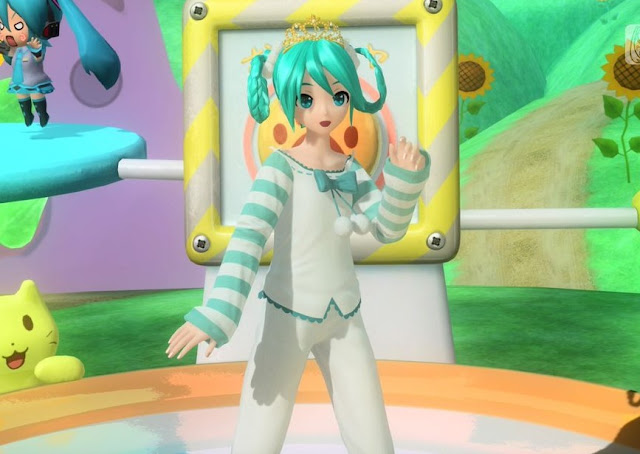 The second DLC pack has a one of the real classic Miku tracks: LOL – Lots of Laugh, as well as a stunning strapless red dress for Miku that just has to be seen to be believed. The characters all get suntanned version of their swimwear, too, for people that prefer their vocaloids a little less glowing white.

The third DLC pack, meanwhile, contains more music, which is always most welcome indeed, and some adorable new costumes. Most significantly, the pack includes Miku’s latest Snow Miku costume, a gorgeous blue dress that, well, you couldn’t actually wear in winter because you’d freeze. Also, the DLC pack comes with sleepwear for the characters, so you can enjoy all those wonderful slumber party scenarios between Miku and Rin.

For people more interested in having more music, this DLC pack has the excellent 1925 and Amatsukitsune, as well as two others that are also good (but not quite as good)

Here’s the full list of updates for the Japanese 3rd DLC pack. English speakers should look forward to this in a month or so.

Retro reflections: On my love for Drakengard