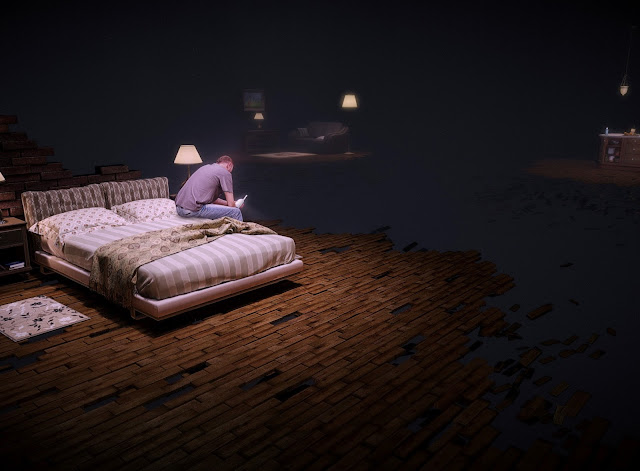 I knew nothing about Get Even before getting some hands-on time with it at Bandai Namco’s offices recently. It looks like a pretty generic modern shooter, and in the opening chapter of the game, I thought that was exactly what it was setting itself up to be.

As the game opens, I discover that I’m a guy on a mission to rescue a girl that has a bomb strapped to her. I make my way into a derelict building, occasionally pulling out my mobile phone to check the map, or scan the environment for clues to explain what’s going around me. Aside from that phone (which also has a flashlight, infrared scan, and other features that I didn’t need yet), I was playing this out as I would with every other stealth-orientated shooter. I’d find ways to take out the few enemies in the building (this is a tutorial, after all), without drawing too much attention to myself.

Things took a turn for the utterly stupid when I was instructed on how to use the “corner gun” – a gun that would allow you to hit enemies while hiding behind a wall. I assume it works by having the bullet take a sharp 90-degree turn in order to hit its target at some point. Given that the rest of the level worked hard to set up an atmosphere of claustrophobia and menace (a darkly thudding ambient sound in the background not the least of it), that nonsense weapon was about as immersion-breaking as ridiculous ideas get. 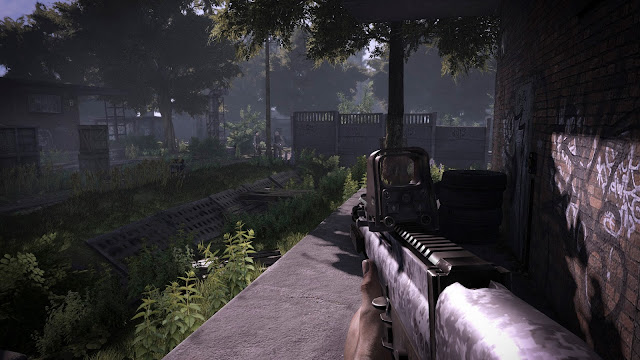 Anyway, I got my way into the room where the girl was being held, and she yells out a number to diffuse the ticking time bomb. She tells me she heard it from one of the guards. I plug the number in. It explodes.

The next thing I know I’m in a derelict old hospital/asylum. Something’s been done to me. There’s a mysterious fellow on the TV in the room telling me to push on through the asylum. He tells me not to let any of the inmates out. I let one out. The TV man yells at me a little. I don’t know if I could have ignored that inmate. If rescuing him changed the flow of the game, I don’t know how, but later on I find a note that I think he left for me, telling me that he knew of an escape. So perhaps my decisions do impact on the general flow of the game.

All of this sequence is more horror than shooter. It’s not exactly Resident Evil or Alien Isolation, but it was tense, exploring this asylum, and not least because so many of the documents I came across told me that this was a place where… experiments… happened, and anyone who has ever played a horror game knows that this doesn’t lead anywhere good for the poor suckers inside. 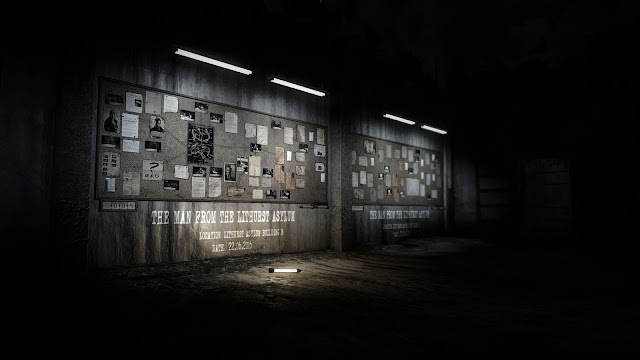 So we had some shooter elements, some mystery elements, and thanks to that phone, there was some exploration elements, where a great deal of the game’s narrative context relies on the player paying attention. Then things went weird again. I reached a room in the asylum, and by studying a photo in that room I was put in a trance. Next thing I know I’m in another place entirely.

There seems to be some kind of memory manipulation story in there, not unlike stuff like Master Reboot. My time in the demo stopped there, so I have no idea how that all plays out, or the developers are able to work that theme to the philosophical and intellectual depths that the theme can be worked to. The developer itself hasn’t got a great pedigree in crafting intelligent games – Painkiller was the best known game by the developer to date – but the potential is there for this game to be brilliant that way.

I’m genuinely intrigued to see where Get Even goes from here. If it degenerates into cheap thrills and big gun-fights, I’m going to be intensely disappointed. If, however, it proves itself to be the reflective and original game that it hints that it just might be, then this is going to be one of the real surprise delights of 2017.

Hands on with Project Cars 2: Vroom vroom I’m in love