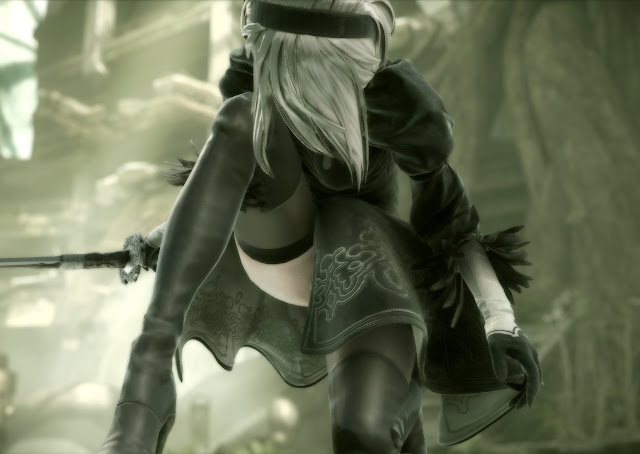 There’s a bit of controversy around NieR: Automata. Specifically, the short skirt of protagonist 2B, which likes to fly around the place like it’s made of the lightest material known, revealing 2B’s white underwear (yes the game’s producer has said that it’s the bottom of the leotard, but leotards that actually look like that are black by default, not white).

There’s already been a copious amount of fan art produced, and an awful lot of it makes good use of that white underwear. And, because gaming is continuing to slide towards puritanism, this is naturally controversial.

Not that the game’s creative director, Yoko Taro, cares in the slightest. In fact, he’s taken to Twitter to encourage fans to create more highly fanservicey fan art. We’d expect nothing less from him. He is one of gaming’s great (and unfortunately too few) transgressive artists. But what makes him so transgressive is not that he’s upsetting people with 2B’s underwear; transgressive artists need to be a lot more than just controversial, and that’s why there are so few genuine examples of them.

“Transgression” is a word that gets thrown around a great deal, though not many people really understand what makes something transgressive. Frequently it’s used as a synonym for offensive – if something shocks, is controversial, and upsets people, it must therefore be transgressive. We see a fair few games that shock and offend; Dead or Alive Xtreme 3 is, by this definition, transgressive.

But in practice transgression needs to be a little bit more than that to have social value. A far more useful way of thinking about transgression comes to us from Michel Foucault; a philosopher who made writing about the fringes of society and art the focus of much of his career:

“The limit and transgression depend on each other for whatever density of being they possess: a limit could not exist if it were absolutely uncrossable and, reciprocally, transgression would be pointless if it merely crossed a limit composed of illusions and shadows.”

In other words, transgression is about breaking through limits with the active intent of seeing what lies beyond it. The result can offend people, certainly, but not everything that is offensive is transgressive. If the purpose of being offensive is to speak to existing value systems, then it’s not transgressive. South Park is a good example. It’s crass and offensive, certainly, but nothing about South Park is transcendent; its goal is to appeal to a very base – and indeed, safe – sense of humour. People laugh along with South Park because, as offensive as it is, it exists within a safety net of familiarity: we already know this kind of humour, and we are comfortable with being offended by it.

Transgressive art, meanwhile, seeks to put us in actively uncomfortable places, beyond the “limit”, where we can examine how things are made and done by completely deconstructing them. Transgressive art is revolutionary in tone, and it makes a point in how it breaks down and undermines whatever it is transgressing.

Foucault makes an example of the Marquis de Sade as a transgressive artist; not because he is offensive in isolation (though if you’ve ever read de Sade’s work, you’ll know how offensive it can be), but because de Sade does so much more than that. He uses offense to actively break down language and experience and deconstruct the narrative form.

Yoko Taro is in that mold. Each of his games, particularly the original NieR, has made a point of deconstructing game design. In NieR, the gameplay is constantly shifting between different styles of play, from platformer to bullet hell to visual novel. It’s not always a cohesive affair, but it’s a remarkably effective examination of how games are constructed. The game also breaks numerous rules about how narrative should be explored within a game, and it’s for these reasons it’s a transgressive game. Not because it’s offensive.

If NieR: Automata follows suit (and based on the demo it looks like that will be the case), then it will be transgressive not because of 2B’s underwear, but because it pushes beyond expectations and delivers a subversive experience that reflects back on game design, narrative, and art itself.

There aren’t many game directors and creatives who do that. For the most part, transgressive art doesn’t sell: among other things, when you subvert expectations, you’re going to upset a number of people who won’t appreciate the message, and you’ll get heat in reviews and on social media as a result. Yoko Taro himself is telling people that this is a “niche” game, knowing full well that it’s not produced as a clean blockbuster for the masses. And because it doesn’t sell or rate well, it can be difficult for it to find support among publishers.

Goichi Suda, Hidetaka Suehiro and Tomonobu Itagaki are three of the other better-known creators of transgressive art in games. Suda’s and Suehiro’s gleeful taste for the surreal and the classic bait-and-switch to flip player’s expectations on their head is certainly subversive, and Itagaki comes from the same kind of raw punk spirit that drove the pioneers of that music genre before it fell, ironically, into the establishment that it so claimed to hate.

There are also a number of independent game developers doing remarkably transgressive things. My Name is Mayo and Daydreamers, which we reviewed last year, are both intensely transgressive in the way they break ideas of gameplay down. Christine Love’s recently released Ladykiller in a Bind is transgressive in its social commentary. So there’s some interesting stuff happening in places in the games industry. We just need more of it.

As a consequence of what transgressive art does, it also helps us better understand and define boundaries for art, and discover new ways to approach it. Transgression, in other words, is critical to the development of any artistic medium, and without it there would be stagnation. We often talk about looking for the “Citizen Kane” – itself a transgressive film – of games, but we should also be looking for, and encouraging, the “Marquis de Sade” and “Antonin Artaud” of games. Even if most people don’t play them, the development of games needs more of the kind of extreme transgression that de Sade and Artaud provided for literature and the performing arts, respectively.