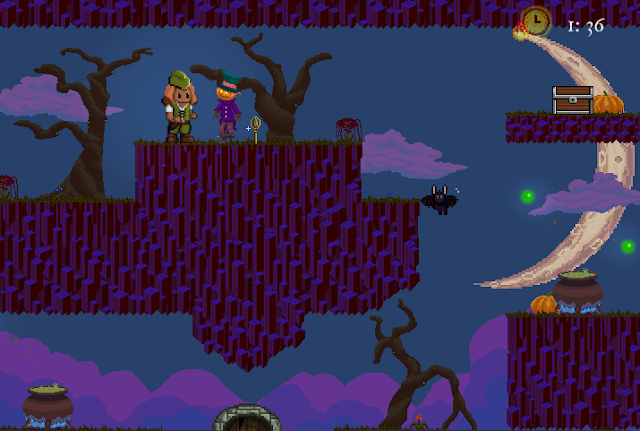 Bard’s Gold is acutely aware of what it is – not exactly a love letter to platformers of the early nineties, but a jaunt into a pseudo-relic of the era. It delivers an exacting feel of the time, to those that missed out on its ludic cousins in their original glory, as well as to those that might wax nostalgic for a game less forgiving than the modern mainstream tends to deliver.

The named influencing titles for Bard’s Gold are chiefly platformers from the much-loved Amiga, including Rainbow Islands and Rick Dangerous, the SEGA Master System’s Wonderboy in Monster Land, and Alex Kidd in Miracle World, and an unmistakeable nod to the more recent Rogue Legacy.

Developer Pixel Lantern is forthright about Bard’s Gold not teaching the player, leaving it to chance or experience to reveal the mechanisms available. While that was certain true of all platformers that have inspired the game, it was also a time before the insert was a mere warranty or advert slip about the publisher’s other titles. Instead each fresh black plastic case bore a game booklet, containing lore, instructions, and even hints.

You may not have needed to pour over the manual, but it was there to entice you about the game for the duration of a car ride home, and though you didn’t need it to learn how to play, it often contained some the how-tos of some unintuitive feature that would allow you to wrest control over a seemingly impossible obstacle. 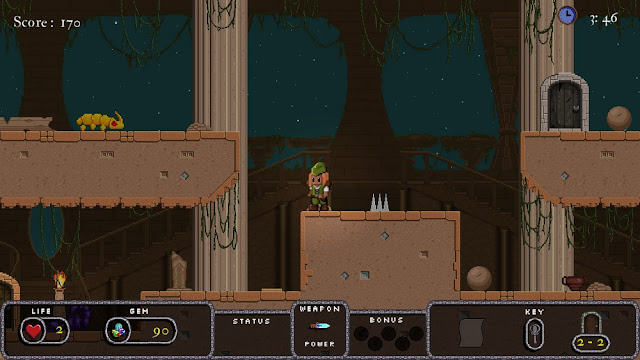 Many of the games of the era would also contain short sequences to set the premise, but that is instead left to the launch trailer to do. Through playing the game, it might not be obvious the titular character is pursuing a goblin that has stolen thue titular gold. Neither will the game reveal in its opening that there’s a reason for the Bard to pursue said gold beyond the hit to the hit pocket, but it’s laid out in the trailer, and is a component that should be seen as essential to an authentic period platformer.

The implementation here misses a vital part of the experience, and though I don’t presume pursuit of the tactile is vital to a full realisation of the apparent goals of Pixel Lantern, but the absence of both facets does transform the experience to being a thing of function alone, rather than paired properly with form.

Not being familiar with the Amiga titles, it may be that this is closer to what those games presented, and certainly in the title screen, it presents a style more suited to computer-based games than those on the console of the day. That isn’t true for the rest of the game, which broadcasts echoes of Wonderboy and Alex Kidd, and even in its most dark or grim, Bard’s Gold shoots its daggers for a cheerful, wholesome mood.

The art style of the game is best environmentally in the first world, though many of the enemies lack for detail or fall short of a style consistent with their surrounds or neighbours. The Bard is reasonable enough, which should be expected from the most persistent graphic of the game. Some of the enemy sprites do look great, either bearing signs of influence from older platformers, as with the shopkeep that is reminiscent of a Monster Land Death Master. Others like Flamy or any of hue of goo rolling about become jarring, robbing the game’s style of its efficacy. 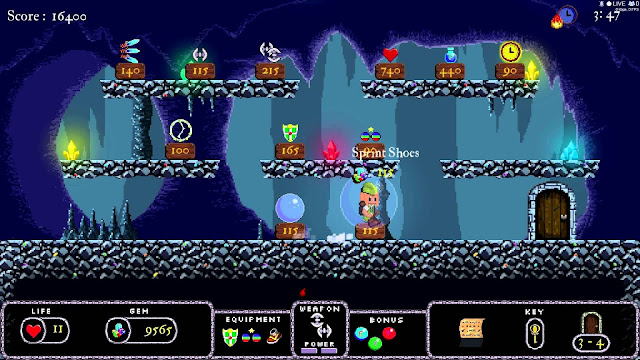 Sections of the design also break the illusion of where this game compares to those it follows, where a progressive chain of realisation moves from st’range, to recognised, to common-place, and finally satured. Being more exacting in what this refers to would rob you of a moment of discovery, but this kind of saturation is there throughout the game.

In function, Bard’s Gold reaches more of its target, with the interactions of the world feeling close to the enemies and obstacles present in the older platformers it follows. The movement is precise and responsive with few exceptions, rare enough to put it to user error and otherwise tolerable.

Though touted as a slower-paced game, which compared to the Metroidvania-style revival that’s happened in some more recent platformers, the ever present tick of the clock does mean there’s pressure. Monster Land did do this with fading hearts, while Miracle World did not, whereas the former did not contain instant death when the latter did.

These twin pressures do enforce tension on play in ways the priors did not have, though there are precedents through the lesser known Alex Kidd and the Lost Stars, or even the original Shadow of the Beast by Psygnosis. Not in style or mood for SotB, but certainly in difficulty. 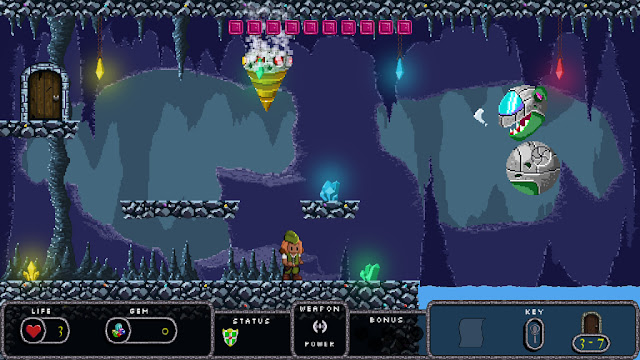 The developer of Bard’s Gold is on record saying that its team has strived for a game that doesn’t hold hands, that won’t tell the player what combination of actions might be possible, where secrets might lay, or the like.

The most prominent example of this is in regards to a tip around jumping, which you can need within five seconds of starting a level, but again the instructions are absent from the game while it’s the trailer for that shows the first possibilities of that ability.

For the marketing materials to contain more information about how to play the game than the game itself offers makes for a curious, questionable situation.

There are definitely harder games about than Bard’s Gold, platformers also, but few really seek the same style of play as this title. As with many platform games that look to provide a challenge for players, the initial stages of the game will be the most frustrating, at least until you recognise the patterns of enemies, the signs for when you might be in danger, and ultimately recall what obstacles lie ahead. 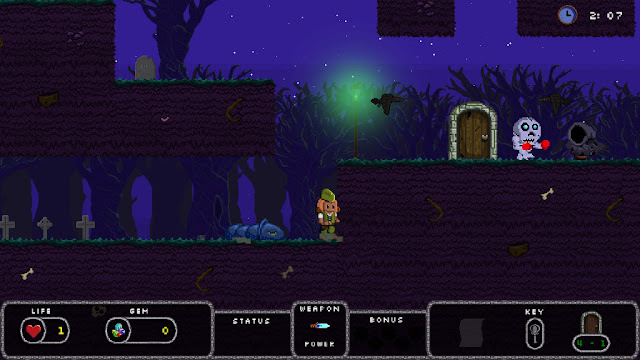 Bard’s Gold contains a few variations for the sake of replayability, including different game modes, with Normal and Retro varying their lives, randomness and payouts. A third roguelike difficulty amps up the randomness, gems, and switches lives out for a health bar, adding another way to play. A post-mortem shop also provides a way to spend excess gems toward upgrades, that’ll definitely increase your chance of survival once you accumulate the right expenditure.

It means that your iterative experience with the game gains advantages as you become better through play.

It is the success against the challenge that will ultimately inspire players to return to this game, as the limited thematic payoff doesn’t deliver the requisite levels of charm to make Bard’s Gold truly feel like a return to gaming in the early nineties.