Square Enix announced Dragon Quest Monsters: Joker 3 Professional for 3DS during a Tokyo Game Show 2016 stage event. DQM: Joker 3 Pro is an updated release of the base game Dragon Quest Monsters: Joker 3 (March 2016 in Japan) with added scenarios and characters. The game will be the last entry in the Dragon Quest Monsters: Joker series. It is due out for 3DS in Japan on February 9. Will Square Enix bring this last, enhanced series entry to the West, to join the previously published two games (for the DS)? While wildly popular in Japan, apparently they did not sell all that well in other regions. Of the over 700 monsters featured in the game (200 more than its predecessor), monsters from newer titles like Dragon Quest X and Hoshi no Dragon Quest will appear in great numbers, as well as completely original monsters. Additionally, if you have save data from DQM: Joker 3, you can import the monsters you’ve collected. The special monster type Incarnus – which often saves the protagonist – will also appear in the finale of the series, and there will be new Incarnus. Their appearance is different from the Incarnus that have featured so far in the series, and much of their power is shrouded in mystery. We’ll show you one of the new ones: 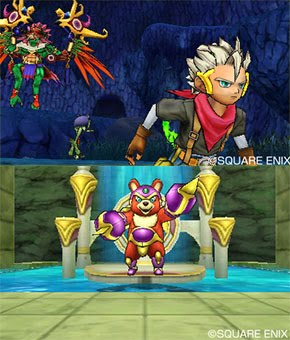 Gaogaia is an Incarnus “that gives off the impression of an innocent bear.” Really? We think there’s an eerie, steely touch of Monokuma about him! Incarnus can evolve into stronger forms through synthesising.

Other additions and improvements include the Ride System (expanded and made more flexible, for example every monster can be used to swim), a story shortcut function that lets you advance the story to specific scenes and a synopsis allows you to revisit story scenes, and the enhanced fusion system Super Life Fusion Modified that brings new capabilities and greater monster power. For those who crave more, you can find a trailer here. https://youtu.be/7onGjqGz8xU

Frozenbyte is currently developing Nine Parchments, a co-operative blast’em up game of magic mayhem, for PC, PS4 and Xbox One. It is slated for a 2017 release. Per the game’s official description, the story “revolves around a group of drop-out wizard apprentices, who’ve decided to skip their training for a quick path to the Nine Parchments. As these novice wizards rapidly discover powerful new spells and ignore all safety aspects, it’s only natural that their hasty progress results in lots of unwanted deaths.”

The game will be for 1-4 players, both online and local co-op, and will feature top-down chaos actio” with powerful spells (Projectile, DoT, AOE, Beam, Spray and Physical spell types). There will be unlockable characters and items and randomly generated monsters.

Whoo! We have a release date for Danganronpa: Ultra Despair Girls on PlayStation 4

Danganronpa: Ultra Despair Girls is a very clever twist on the Danganronpa franchise, replacing the slow, methodical visual novel structure of the main, numbered, games, with a action/puzzle shooter. Against the odds, it’s one of the best games available on PlayStation Vita, and now we have the release date for the PlayStation 4 port of the game!

It’s not long away; you’ll be able to get stuck into this one on June 23 (Europe and Australia) and June 27 in the US. Courtesy of NISA, there will be both digital and physical releases of the game.

The anime adaptation of Higasa Akia’s The Royal Tutor is coming along swimmingly, and a recent teaser trailer revealed that it will premiere this spring. Based on the manga of the same name (released as eBooks in 2015), The Royal Tutor follows — you guessed it — a tutor to a handful of young royals, princes to be exact, from the kingdom of Grannzreich. The tutor, Heine Wittgenstein, looks like a child but packs a punch when it comes to personality, leading to some epic comedic moments when it comes to his interactions with the princes.

The princes include Kai, Bruno, Leonhardt, and Richt; all have the last name von Grannzreich, making their role in the kingdom of the same name quite apparent. Kai, the eldest at 17, is very private and rarely appears in public. Bruno, 16, is a child prodigy often referred to as a genius. Leohardt, 15, is extremely vain and believes himself to be the most beautiful person on the continent. Richt, the youngest at 14, has a bright personality and bonds easily with foreign royals — but he does tend to act as though he isn’t royal at all.

Oh boy oh boy, is Blue Reflection ever shaping up to be Gust’s best game to date — and that’s saying an awful lot, as the developer has rapidly become one of our favourites. The first gameplay video for the upcoming title was shown during a recent live stream; the entire stream is shown in the below video but the goods are at 28 minutes.

Also revealed in the stream is that first-print copies of Blue Reflection will include a PS4 theme, and in-game theme, and an in-game school swimsuit outfit. The swimsuit outfit will undoubtedly raise eyebrows in the West for no reason considering it’s a school uniform, so keep an eye out for that drama. Blue Reflection: Sword of the Girl Who Dances in Illusions will be out in Japan for the PlayStation 4 and PS Vita on March 30.