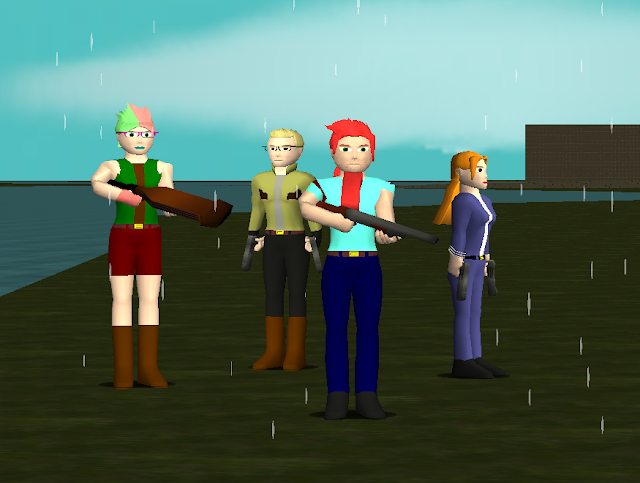 Let’s talk about one of the most painful games that I’ve ever played. Skylight Freerange 2: Gachduine is a complete mess. It never makes sense, not even for a second, it’s barely playable, and it is so far beyond ugly that words like ‘ugly’ are almost doing it a service. But it’s almost worth buying, because it is so morbidly satisfying to feel your sanity slipping away as you play the thing.

The best bit about the game happens right at the start, where you create a character. You can give him a mullet, wife-beater shirt, and ugly stubble beard. There aren’t many games that let you create a true-blue Australian bogan, and it’s somehow appropriate that this game’s the one to do that.

So I created my bogan and he was dropped right in the middle of a labyrinthine plot so confusing that the story writers must be geniuses for penning something that’s simply too smart for anyone to actually understand – or they’re just terrible at their job. Without trying to be too arrogant here, I’m going to suggest that my inability to understand the plot has more to do with the game than me. What I could piece together is that bogan-man is a leader in an underground freedom fighter group that opposes two different cult-like, fascist, everything-bad-in-the-world-for-reasons groups. I’ve forgotten the names of the groups now, but one of them actually has ‘cult’ in its name, so I guess I’m on the right track with that one. This freedom fighter group, led by mullet-man, picks up a couple of university students who survived an attack on their school, and then they all set out together to get into fights with these cult groups.

I love the epic music for this major plot point battle. #PS4share pic.twitter.com/45W665fzjW

None of this is explained in a logical fashion at all, and before long I just gave up trying to follow along. I moved from town to town, following quest markers as they appeared, and had no idea what was actually going on. It doesn’t matter; as you can see for yourself from the images in this review, the characters and environments are so relentlessly unattractive that you’re not going to want to care about any of it in the first place.

So you’ll play it because it has a great combat system, right? Oh no, don’t let yourself believe that, because it’s beyond woeful. This game gives you a combat system that’s not unlike the ATB systems from most of the Final Fantasy games – if those systems had been lobotomised badly, that is. In Skylight Freerange the combat system is clunky to the point where doing anything but reusing the same weapon and attacking over and over again is a headache, and it’s all so unbalanced that the game is, inadvertently (I think), one of the most difficult games that I’ve ever played. When combat is joined, each combatant starts to build up a meter. Once it’s filled, they can execute an attack. Alternatively, they can allow a second bar to fill up, which allows them to do extra damage.

There is a wide variety of enemies to fight, ranging from regular people through to monsters that, for some reason, all look like rejects from Edvard Munch’s The Scream. It’s probably all the art team was capable of rendering. These enemies have different strengths and weaknesses, and there’s a wide range of weapons that you have access to with which to take them down. That’s the extent of the good in this system. The problems, meanwhile, are nearly endless, but just to run down a couple of the key ones:

This is one of the game’s dungeons. I’m tired now. #PS4share https://t.co/aLxXC3Vqcf pic.twitter.com/ZkyhWuYakd

1) There’s not nearly enough feedback information. I quickly forgot which enemy was weak to which attack, and the combat system is really awkward when trying to figure out what attacks work through trial and error, thanks to the overwhelmingly clunky interface.
2) The excessively poor camera makes it impossible to survey the battlefield properly. Not that tactics would necessarily make the game any more enjoyable, but struggling to figure out what’s even going on is beyond terrible game design.
3) The difficulty spikes are obscene. You’re given an open world to explore, and immediately after the tutorial you’re given the first of your side quests. Don’t even bother trying it. At the level your characters will be at, you’ve got no chance. This is how the entire game works.

There’s nothing wrong with the game’s ambition. For an indie game, the open world is actually quite large, and there’s a clear, explicit desire to build an adult, mature RPG with a complex combat system and plenty of intrigue in the narrative. With ever-fading hope I kept playing on, and on, and on, in the hope that at some point I’d leave behind its ridiculously childish art and clunky storytelling and start seeing the vision that the developers were aiming for.

I never got there. It’s just impossible to forgive a game in which I can’t talk to the NPCs because their text boxes are obscured by my character portraits in the clumsy user interface. It’s impossible to take the game’s attempt at a “mature” narrative seriously when its idea of a sex club is a block room with a poorly rendered poster of a bikini girl on one wall and a pregnant prostitute thrown in for “laughs” (or she’s just fat, I can’t tell which, or which depiction would be worse). It’s impossible to take combat seriously when the game provides so little feedback for developing any kind of strategies to take on enemies. 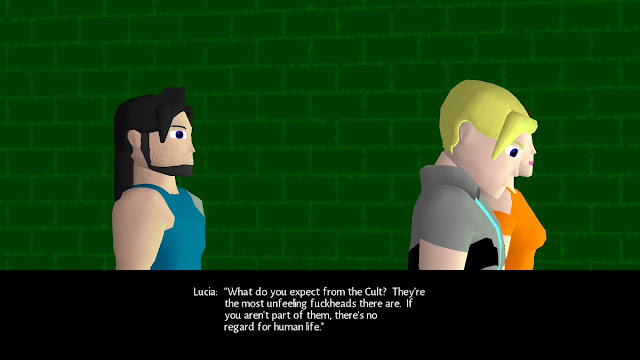 We have seen some truly wonderful indie games over the years, including games developed by tiny, tiny teams. Even in the RPG space, which is most certainly one of the most challenging genres to work with on a budget, there are games like Siralim that do something remarkable.

But indie developers need to understand how to achieve something within their means. Why a small team thought it could make a grand open-world RPG is beyond me, but Skylight Freerange 2 demonstrates the horrible consequences of vastly overreaching what your resources and skill level allow. Full props to the developers for trying – the game is oddly fascinating in just how badly it has failed -, but make no bones about this, if the screenshots and video haven’t proven it to you: this game is an utter travesty.