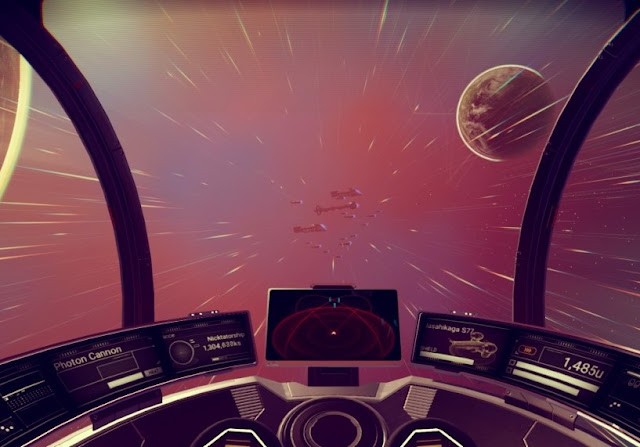 This article is taken from Nick’s website, Clever Game Pun. Have a read of it when you get a chance; plenty of interesting and fun articles on there!

I’ve finally jumped into the immensely expansive universe of No Man’s Sky. While I’d originally hoped to join it back when most of the world did, my usual platform of choice didn’t have the game among its titles, and so the wait began. It was an awkward wait. Although many didn’t seem to share the same excitement for the game after they’d played it, I had always felt the expectations around what the game was to be far removed from my own preconceived notions of it.

With Christmas delivering a brand new PS4 to the space beneath my tree, the means were finally at hand to play the game.

I’m familiar with some of the criticisms of the game that did delve into areas I could understand, but also know that the Foundation Update changed the game significantly, and that subsequent patches have tweaked things ever toward that perfect realisation of the No Man’s Sky concept. 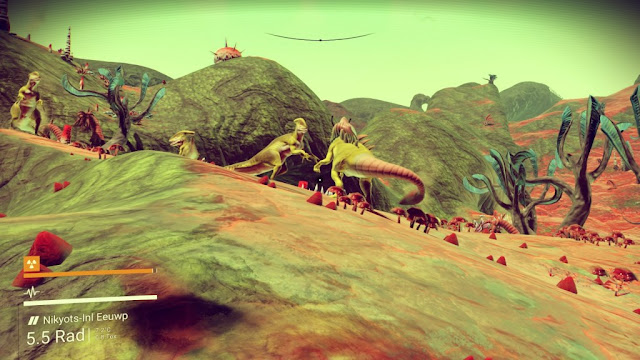 Within seconds of gametime on a planet, I snapped this shot. There were dinosaurs on a planet sizzling in radiation, and a palette that’s been prominent across most coverage of this gem.

So, already I’m alright with this. Admittedly the first planet, but the initial rise is good. I’d put my whole argument for this console down to this one game, and even after the widespread, unhinged backlash that saw it nominated as the worst game of 2016 — which is just a phenomenal lack of perspective when it comes to something in 2016 one might want to be upset by — I still wanted the game.

There are many things the game isn’t.

It’s not a multiplayer combat arena. It’s not much of a multiplayer anything. I have already happened across a path set by some other hapless traveller, way back in August, but I have no way of knowing if any might still be on my path. If I really want that, I have other games. 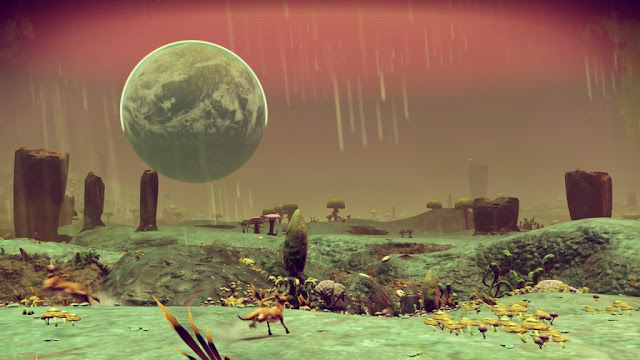 It isn’t Minecraft in space. You’re pretty limited in what you can build. If you do want something that straddles the line between both, the closest I can recommend at the moment is Subnautica. It allows more freedom with building, comes with the range of Regular/Survival/Creative that was added to No Man’s Sky in the Foundation update, and the base-building side of things has a similarity that suggests Subnautica could exist in the same galaxy.

It isn’t the game to end all games, the last game you’d ever have to buy, or a game that would fill your gaming needs for the rest of your life. I don’t need it to be any of those things either, because I like games, and am always keen to play more. If such a game ever exists, yes it would have to be procedurally generated, open world, and allow lots of freedom, but let’s worry about that later.

But anyway, back to what No Man’s Sky is. 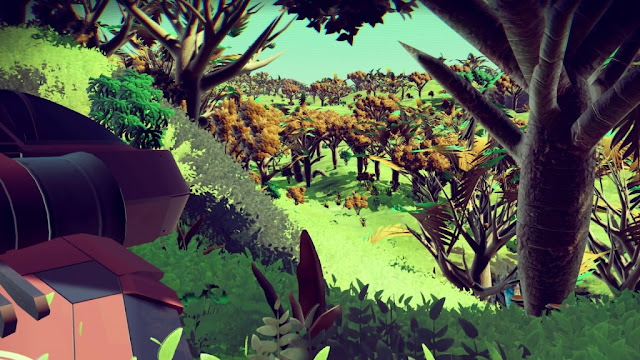 It’s pretty. The screens in this should tell it all. It doesn’t look photorealistic, and it all has a style, but that’s to be expected. A galaxy with trillions of stars (or whatever it is) isn’t going to have hand-crafted planets throughout. Unless the game directs you through certain planets in all playthroughs, you wouldn’t expect it to do that.

The variations on planets could be closer to pre-launch media now than at launch, but the lines hasn’t moved that far.

It’s incomparable. None of the games I was directed to as alternatives really scratched the itch. None of them gave me the feeling that I was exploring a planet, or moving through the galaxy. Some were great for exploration, but not of space. Some were great for flying through space, but contained only barren planets. Some were even small aspects of an old favourite that kind of hint that No Man’s Sky could thematically fit in a 6-wheeled rover-tank named after an aquatic predator.

It may only be early in my journey through the galaxy, but I’ve had quite a few surprises already. I’m also not racing straight to the centre of the galaxy, nor trying to 100 per cent any particular planet or system, which could change my experience a lot. The only early criticism I saw that still resonates is the fiendish lack of equipment slots, but even that’s starting to come under control. 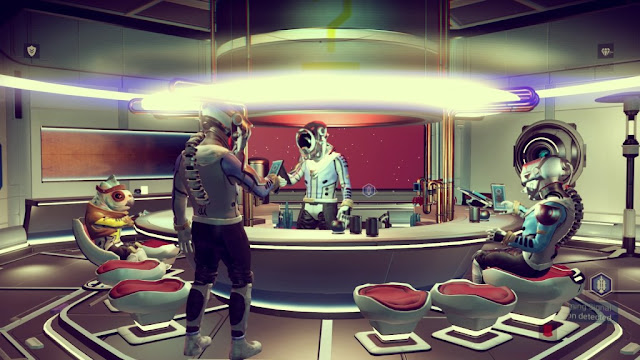 Most of the cool moments so far have been through discovery, which is what you want from an exploration game. Whether that’s stumbling across the wreckage of a ship, encountering a space battle as you enter a new system, or finding that first quiet spot by the shore of a lake. I know veterans of the game who might’ve left could be thinking they used to feel the same way, waiting for a followup that laments time lost, but I honestly don’t think it will go that way.

I still have a lot more to play of the game, and want to get back to it, so I’ll close this with a gallery of some screens I’ve taken so far.